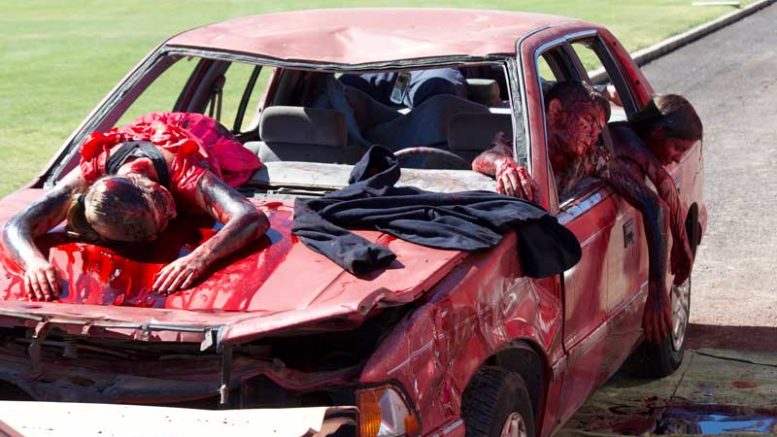 THATCHER – The subject matter hit home for a judge, a mayor, a still-grieving parent and likely many in attendance. Those who put on the mock DUI crash at Eastern Arizona College on Tuesday just hope the message resonates with the youth in attendance.

The Graham County Substance Abuse Coalition (GCSAC) held the mock DUI crash at John T. Mickelson Stadium in Thatcher and had attendance from ninth- and 10th-grade students from the Safford, Thatcher, Pima and Fort Thomas school districts. While the Coalition normally only holds the event once every two years, GCSAC Coordinator Kathy Grimes said this year they invited younger students than who were in attendance last year. 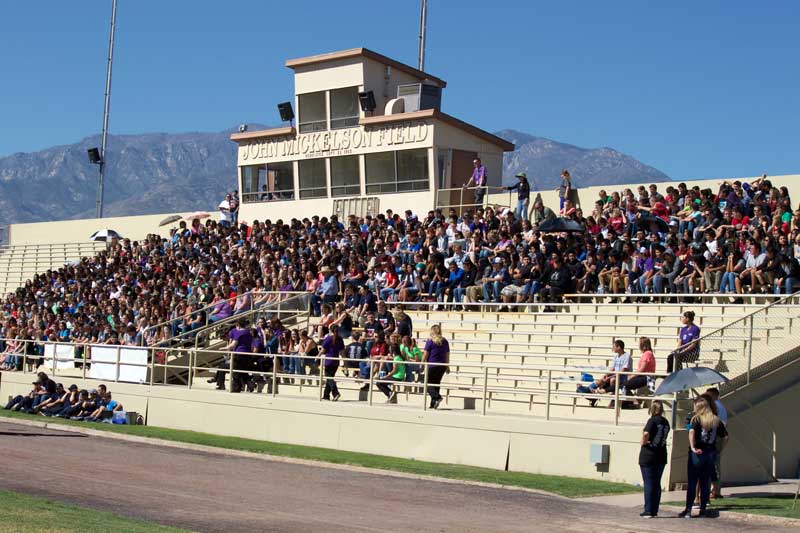 Jon Johnson Photo/Gila Valley Central: Freshman and sophomores from all the local school districts were in attendance. 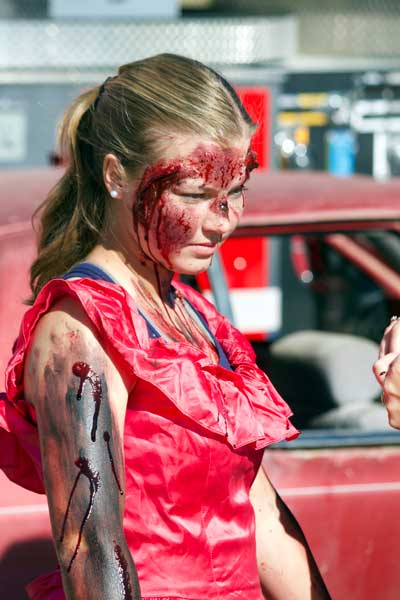 “This year, we decided to focus on our freshman and sophomore students – the reason being is we know in Graham County the average age of first use is 13,” Grimes said. “We want to begin educating them as young as we can, so they can make educated choices when they are faced with those opportunities.”

“This event is good,” said officer Brian Ellsworth, Thatcher’s DUI coordinator. “It gives students the chance to come out and see realistically what goes on in a traffic accident.”

Ellsworth also praised the event as being a good training tool for the first responders, as it was performed as a real-world event. 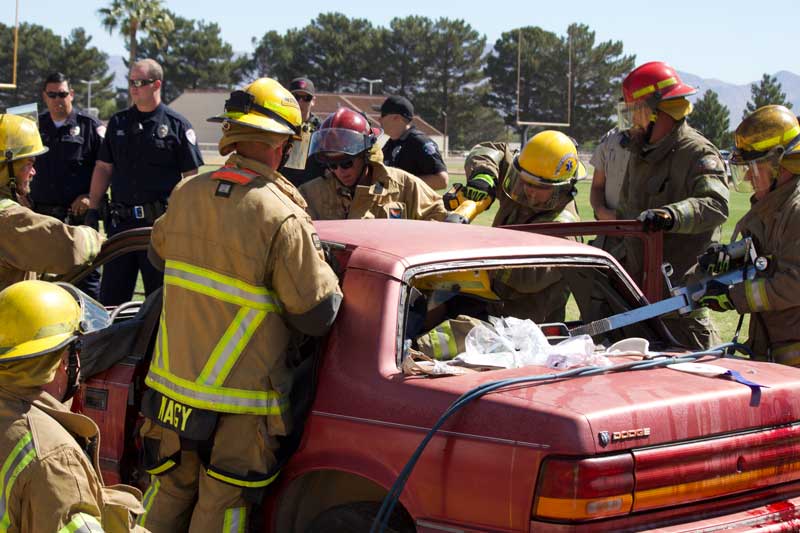 This year, student volunteers who portrayed the injured included Dylan Dorrell and Ella Peterson with the group Gear Up, and Riley French and Keturah Stanley with the Youth Advocates group. Lori Johnson portrayed the drunk driver who, while not seriously injured, gets arrested and faces manslaughter charges for her actions. She said she thought the event was important to show the potential consequences of drinking and driving.

“A lot of people die each and every year and I want to help some of the children in our community to encourage them to not drink,” she said. 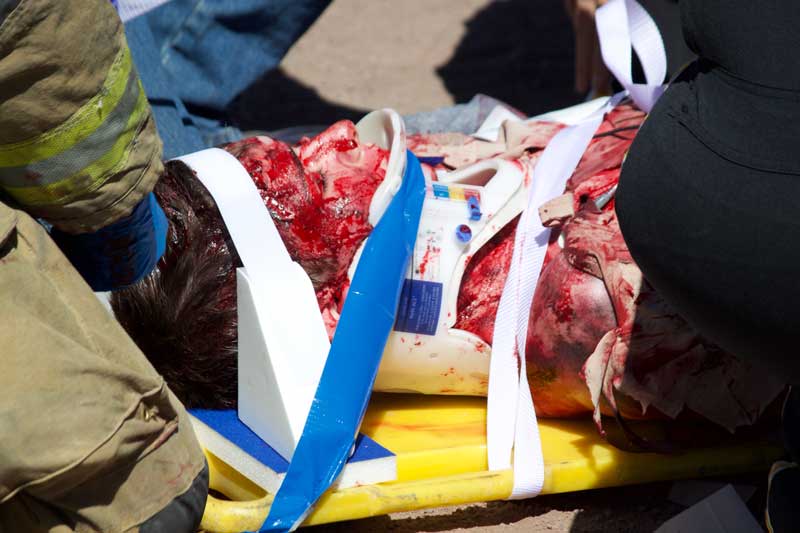 Graham County Superior Court Judge Michael D. Peterson was one of the guest speakers at the event. His daughter, Ella, portrayed one of the injured passengers who was flown from the scene and he said while he knew it was just a mock crash, seeing his daughter in that situation caused him to be very emotional.

“I can not imagine how that would have felt if that was real,” Peterson said. “I’m grateful that it wasn’t, but you have to make choices (and) your lives will be the product of those choices.” 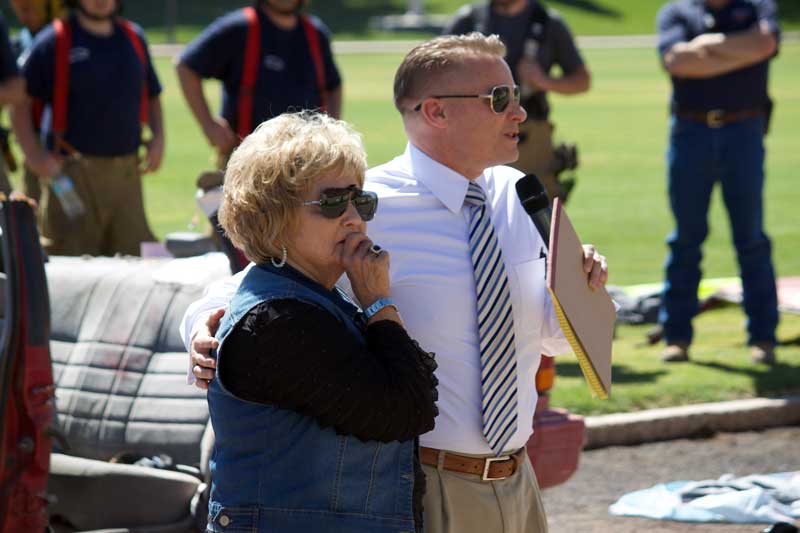 Lynn Smith was the second guest speaker at the event. She knows all too well how it would feel if it was real. She said she had lost a grandson, son-in-law and her son, Tanner McKay Smith because of substance abuse issues. Tanner was just 21 when he went to a drinking party at the airport. He then got in a truck with a driver who was also inebriated and before they reached 8th Avenue the truck had flipped and Tanner was dead.

“This, in real life, can happen to you if you choose to make choices that are improper or inappropriate,” Lynn Smith said. “Please go home today and sit down with your family and talk about what you’ve seen today.” 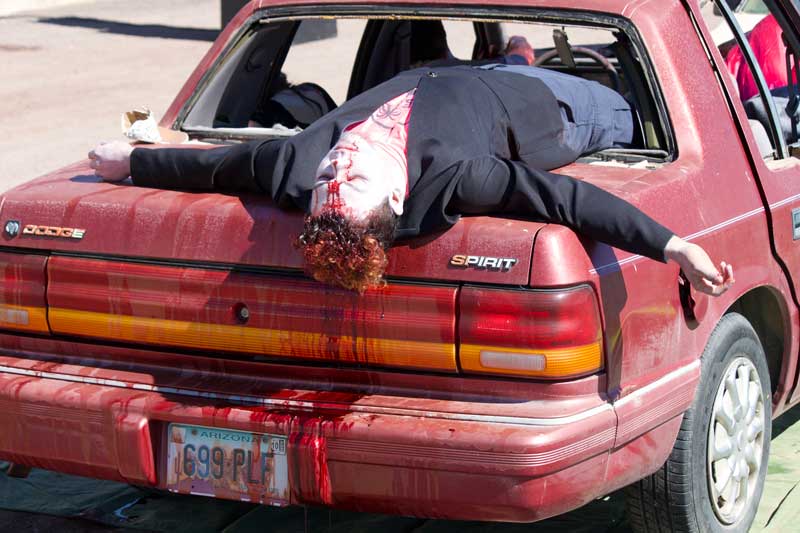 Safford Mayor Jason Kouts and his wife, Maria, portrayed the grieving parents of a deceased youth. Maria said they wanted to be a part of the simulation because they know all too well how it feels to get the call from the police informing them of a tragedy because they once got a call informing them that their son had died from a heroin overdose. Her son was eventually resuscitated and is alive and well today.

“It hits close to home,” Maria said. “It’s something we’re passionate about and something we want to raise awareness about. Education is so important to us.”