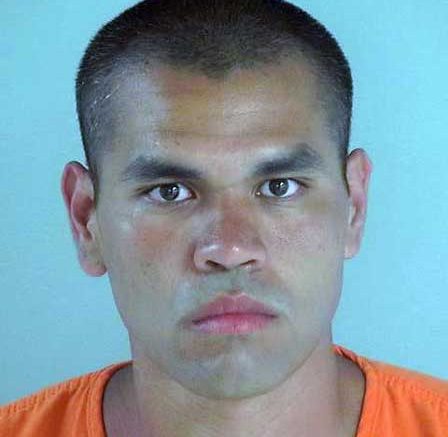 Contributed Photo/Courtesy GCSO: Jesus Ramirez led officers on a high-speed chase through Thatcher, Safford and Graham County in a truck stolen from Benson.

THATCHER – The chase went speeding through Thatcher and Safford and into unincorporated Graham County, but in the end the Thatcher Police got their man, who happened to be in a stolen truck.

Jesus Gabino Ramirez, 24, of Thatcher was arrested and booked into the Graham County Jail on charges of theft of means of transportation, driving on a suspended license and unlawful flight from pursuing law enforcement.

According to a Thatcher Police report, Ramirez was found driving a gray, 2001 Nissan Frontier that was reported stolen out of Benson.

A Thatcher officer was running radar on traffic on U.S. Highway 70 at the intersection of Bauer Avenue at about 1:40 a.m. on April 18 when Ramirez zoomed past him eastbound going 81 miles per hour. The speed limit for that area of highway is 35 mph.

The officer began pursuit, but instead of pulling over the truck increased speed as it approached the intersection with 20th Avenue, according to the report. At that point, the officer entered the truck’s license plate and learned of its stolen status.

Ramirez eventually decided to give up and pulled over around milepost 360, which is about halfway between Safford and Duncan. A high-risk stop was made and Ramirez was transported to the jail without incident.

Once at the jail, however, he claimed to have ingested heroin, so the jail would not accept him until he was medically cleared. Ramirez was then transported to the Mt. Graham Regional Medical Center, where he was evaluated by an Emergency Room doctor and cleared to be incarcerated. He was then taken back to the jail and booked.

The victim was notified her truck was recovered and she picked it up at the Thatcher Town Yard the same day.