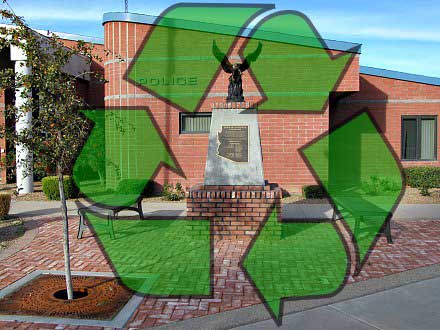 The town of Thatcher will continue its recycling program utilizing drop-off locations for the time being.

THATCHER – So far, Thatcher’s recycling test program has shown favorable results, and the town will continue to monitor it in its current state of utilizing recycling canister locations rather than move forward with residential curbside pickup.

The Thatcher City Council met Monday and discussed a myriad of topics, including the town’s bustling recycling program. Initially, the town began getting ready for recycling back in January, and now after having two months to see if the citizens were interested, the answer is a deafening yes. In a previous interview, Thatcher Mayor Bob Rivera stressed to Gila Valley Central that the amount of recyclable material collected by recycling bins once they were placed in their central locations would determine whether the town would put into place its own recycling program. The test has apparently been proven successful in quenching the worries of the council.

On Monday, Rivera said he was somewhat skeptical at first about the town’s responsiveness to the idea of recycling. However, he was surprised and pleased with the outcome.

“It’s been a really good success,” he said. “I at first thought ‘let’s see what happens’, and now it’s really taken off. People are wanting to do that, (curbside recycling) and we’re going to gauge that as time goes on. If there’s such a huge demand, the council might have to make a decision to go with a blue can per house and then we’d move the big cans to the businesses.”

On Thursday, the Thatcher recycling program collected 1,500 pounds of materials. At first, certain collection areas had only one or two cans, but they received so many materials that they asked for more.

“We’re going to keep those big cans,” Rivera said. “As a matter of fact, we’ve had to add in some areas. It’s been very successful. I think people are taking the time to do the right thing. We’re protecting our world and at the same time, we’re keeping the landfill from getting too full too fast. ”

Items that can be recycled:

What cannot be recycled:

Thatcher to test receptiveness to recycling