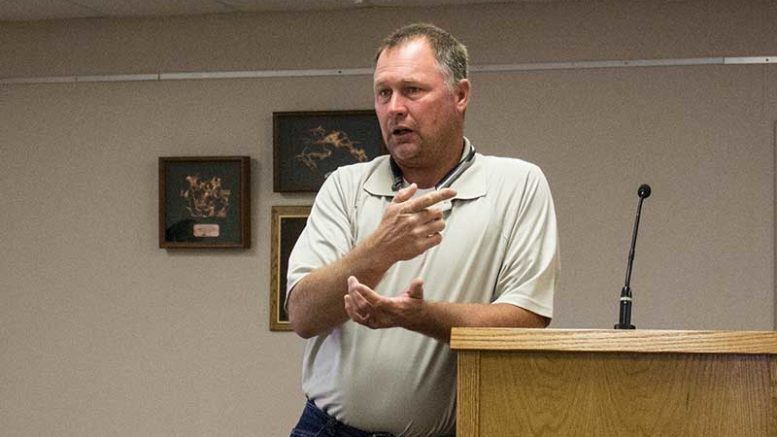 Brooke Curley Photo/Gila Valley Central: Metal Mite Recycling owner Ty Traylor informs the audience about his recycling business in Pima and the types of material, including appliances, he accepts.

SAFFORD- The progress and setbacks to recycling regarding city and town efforts to prolong the life of the Safford Regional Landfill were discussed at the Safford City-Graham County Library on Wednesday.

Individuals from one side of the Gila Valley to the other gathered together at the library to learn the latest on the recycling efforts operating within the community. Safford Utilities Director Jenny Howard, Metal Mite Recycling owner Ty Traylor and Thatcher city employee Gary Allred presented the current recycling situation to those attending, answering questions and requesting community feedback.

Recycling information was shared with the community, including where and what to recycle. Also, for those who may not know, there are recycling bins available at the landfill.

The landfill, according to Howard, has roughly six years left of life expectancy left. The landfill has no lining and only has one more section to be filled before it will be forced to close. At the current rate, roughly 10,000 pounds of trash go into the landfill every 90 days. Needless to say, through recycling the community can extend the life expectancy of the landfill.

The first to address the audience, Howard said that at this point, through the recycling efforts of the community, roughly 15 percent of the Safford city trash is being recycled.

“We made the adjustment (to recycling) and things are going well, but I would like to see more,” Howard said.

Allred spoke on the ever-expanding Thatcher recycling effort. He requested Thatcher residents keep in touch with the town officials to ensure the lines of communication stay open.

“We’re wanting to get feedback from our residents,” Allred said, “We want to know what their needs and wants are.”

Thatcher’s recycling program jumped to a running start from the first month it came into existence. The program began with eight recycling canisters placed at strategic areas, and has now more than doubled in size to include 19 canisters. Even with 19 containers, most of them are filled by the scheduled pickup days, which are on Mondays and Thursdays. However, Allred stressed that even though the pickup was going very well, contamination is one of the largest issues facing the recycling program.

“The number one contaminant are the plastic bags,” Allred said, “It just needs to be in there loose.”

Above is a chart of recyclable plastics.

When asked if there could possibly be a curbside recycling program in Thatcher’s future, Allred replied that he hadn’t heard of any curbside pickup options coming soon, but it might become an option in the future.

“Right now there’s not talk about it,” Allred said, “But as this grows, it might become an option.”

Metal Mite Recycling owner Ty Traylor was the last presenter and told those attending that his business, which is located in Pima, will accept all appliances. Traylor is also scheduled to organize and utilize recycling in Pima at a later date. Unlike the landfill, which will not accept refrigerators without the freon having already been drained, Traylor accepts refrigerators. Everything from cardboard, books, aluminum and appliances, Traylor will accept the recyclable materials and go through multiple channels to see that they are processed properly.

“I guess basically items that we recycle are all metals, refrigerators and appliances,” Traylor said. “It doesn’t matter what size they are. There’s nothing too big or too small.”

Although the efforts are in constant motion to elongate the life of the landfill, it will eventually be filled. Howard told Gila Valley Central that it is incredibly expensive to close down a landfill and open it once again.

“It will take millions of dollars to close and millions to open it,” Howard said.

The solution to this extremely costly endeavor is to simply build on top of the existing landfill. This layering option is called a vertical expansion, which requires a type 4 permit. The permit will add roughly 30 years to the landfill. However, since the bottom of the landfill was not sealed when it was first created, the government requires rigorous air and water testing to be done and massive amounts of paperwork to be completed and sent in first. The testing and paperwork have already begun, and the application has been in the works for a number of years. However, the landfill is still striving to attain the type 4 permit. Every recyclable material kept out of the landfill gives the landfill just a little more time.