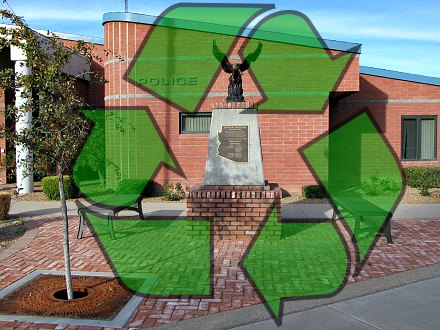 The Thatcher Town Council has decided to test the waters of recycling by putting out large containers in key locations to see if residents are interested.

THATCHER – The town of Thatcher will soon begin a test trial to see if it will create a full-blown recycling program in ths same mold as the one utilized by Safford, which alters residential recycling pickup with its residential trash pickup; each getting picked up once per week.

On Monday, the Thatcher Town Council voted to start its first recycling trial. However, the fate of Thatcher recycling depends on how receptive it is with town residents.

Thatcher has considered recycling since Safford began its program. Thatcher Mayor Bob Rivera told Gila Valley Central that large recycling bins will be placed in strategic areas in the town as a test to see if people will recycle.

“We’ll put them in strategic places, and that’s going to give us a sample of is it really going to be used, (and) do people really want it,” Rivera said. “There’s quite a huge expense. The cans alone will be $60,000 to $70,000. When we eliminate one garbage pickup, we will have to make the other one a second pickup for recyclables.”

Rivera said Thatcher staff had been working on estimations of cost and effectiveness. Unlike in Safford and what the town would ultimately do, the test program will place larger containers in specific areas located around town, and the residents must bring their recyclables to the bins.

“Staff has been investigating what type of containers to use,” Rivera said. “If they’re really interested in recycling, we’ll allow everybody to know that and they’ll have a place.”

The large bins that will be set out for recyclable materials will be located in key areas of the town, including Daily Estates and the commercial corridor of U.S. Highway 70. Rivera stressed to Gila Valley Central that the amount of recyclable material collected by these bins once they are placed in their central locations will determine whether the town will put into place its own recycling program.

“Like I said, that will be an indicator,” Rivera said. “We said we were going to look into (it) after Safford had been on it for over a year.”

The initial drop off recycling bins program appears to be in the same mold as the previous system in place at the Graham County Rehabilitation Center’s former recycling facility on 7th Avenue. That facility stopped its bulk recycling in August, 2015.

The date of the bins arrival has not yet been decided. Gila Valley Central will update this story as it develops. The standards for recyclables that apply for Safford’s recycle program will apply for Thatcher’s drop-off system.

Items that can be recycled:

What cannot be recycled: