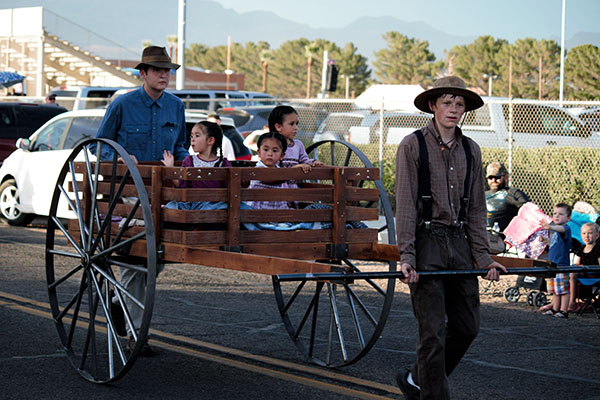 THATCHER – The Church of Jesus Christ of Latter-day Saints’ stakes of Safford, Thatcher and Pima sponsored the Gila Valley Pioneer Days celebration Saturday and the resounding opinion was that it was a stupendous success.

“It was so much fun this year,” Shawnda Bennett, of Thatcher, said. “My sons loved the fireworks and we really enjoyed the music.”

After a day of athletics, including a 5-K run, volleyball and basketball tournaments, the customary parade featured floats designed around the theme, “Your Heritage: Past, Present and Future.” 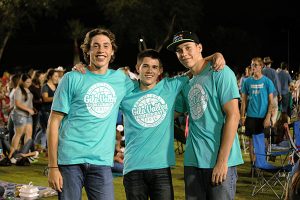 Jon Johnson Photo/Gila Valley Central:
From left, Pima’s team of Justin Kartchner, Trey Thompson and Jarrett Kartchner finished second to a team from Morenci for the 3 on 3 basketball title.

As the parade winded down, throngs of people descended upon John T. Mickelson Field at Eastern Arizona College as the patriotic-themed band “Tribute” set the crowd up to be bowled over by this year’s Battle of the Bands winner, “PB&H”.

Thousands of residents and visitors joined in on the family fun, which featured food and frivolity. After a full set that had event goers dancing in the field, “PB&H” played a musical medley of 80s hits before passing the torch to the pre-recorded music and fireworks show that lit up the stadium and elicited oohs and aahs from the crowd. 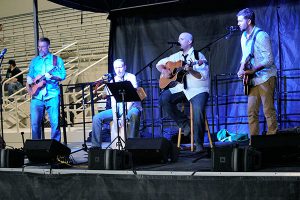 Lindsay Rasmussen and her family took a trip down from Utah to the Gila Valley to visit family. She said she was ecstatic with how the performance went.

“I loved the band, and the fireworks were great,” she said.

Larsen Bennet, of Florence, was also in town visiting family and summed up the overall theme of the event.

“It was a fantastic night that I enjoyed spending with my family,” he said. 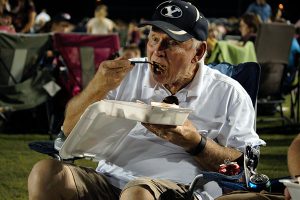 Jon Johnson Photo/Gila Valley Central:
People came from near and far to join in on the family fun and frivolity. Pictured, Larson Bennett, of Florence, enjoys a barbecue dinner.

Pioneer Day is an official holiday in Utah. The event commemorates the arrival of Brigham Young and the first group of LDS pioneers into the Salt Lake Valley on July 24, 1847. In the Gila Valley, the event also celebrates the LDS pioneers who helped establish settlements here and elsewhere in Arizona.