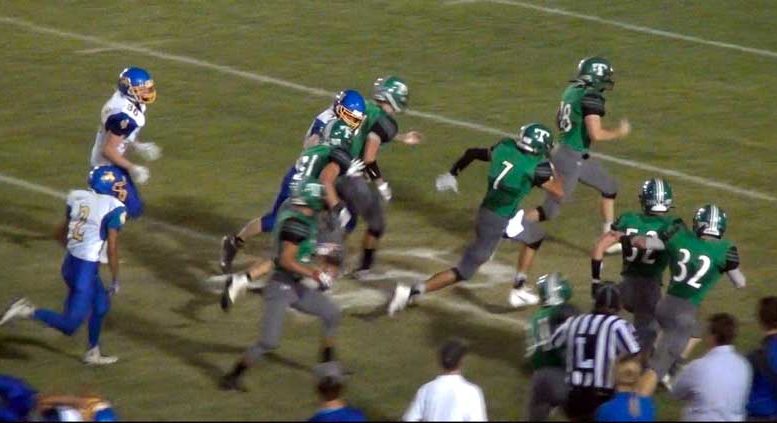 Jon Johnson Photo/Gila Valley Central: After playing to a stalemate in the first half, Jack Kortsen (7) and the Thatcher Eagles ran away with the game in the second half, beating Pima, 52-20.

Rough second half for the Roughriders

THATCHER – The Thatcher Eagles (4-0 conference, 6-0 overall) have never lost to the Pima Roughriders (4-2 conference, 4-2 overall) in the modern-era, 11-man football competition. But for 23 minutes of the first half during Friday night’s game at John T. Mickelson Stadium, the Roughriders were the better team and clung to a 6-point advantage. 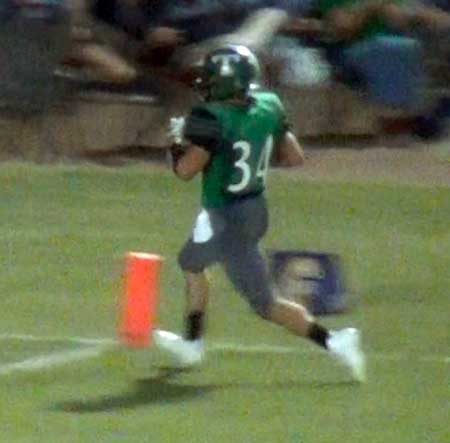 Jon Johnson Photo/Gila Valley Central: Quinton Turley glides into the end zone for Thatcher’s only points of the first half, narrowly escaping being held scoreless for the first time this year.

After Jack Kortsen intercepted Pima quarterback Joshua Whitaker in the waning seconds of the second quarter, however, Thatcher quarterback Tyler Roebuck hit his running back Quinton Turley on an 83-yard bomb for a touchdown that started a run of seven consecutive touchdowns for the rest of the game. Thatcher survived a five-turnover first half to come back and beat Pima, 52-20, to keep its unbeaten season intact.

“After playing so good of a first half when you’re playing back and forth and knowing what it takes to put points on the board to have to come back from two scores is pretty tough,” said Pima head coach Jace Hancock.

Defense ruled the first half of play as Pima stopped Thatcher on fourth down and short two times, forced a punt, and had three fumble recoveries.

Pima had its troubles in the red zone, however, and failed to capitalize three separate times and instead received penalties that pushed them out of scoring contention or just failed to punch it in. 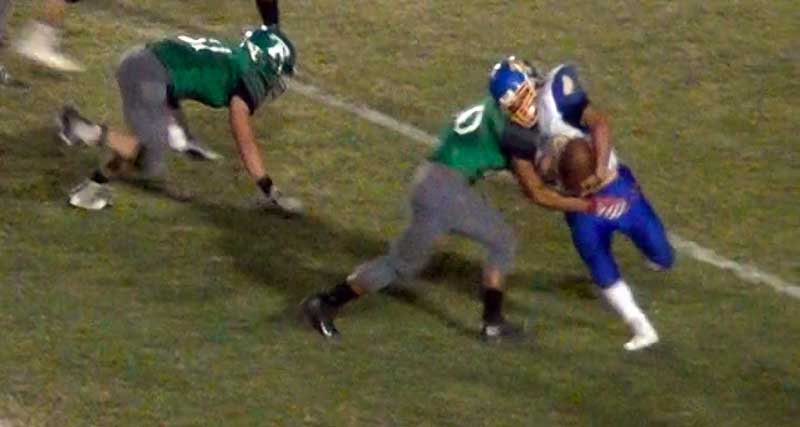 Jon Johnson Photo/Gila Valley Central: This forced fumble led to a touchdown and a 16-point lead for Thatcher early in the third quarter.

The Eagle defense also stood tall in the first half, causing a fumble on Pima’s initial possession, forcing two punts, two turnovers on downs and an interception. The Kortsen interception, which came on the heels of Thatcher turning the ball over on a fumble, really hurt the Roughriders. It gave Thatcher a crack in the door to stick its foot in and enabled the Eagles to avoid being shutout for the first time in the first half this year.

While the defense was the rage in the first half, Pima’s air attack looked enviable at times, and Whitaker showed off his arm on more than one occasion. Whenever the Roughriders needed a big play, Whitaker was there to put it up for his receivers.

Bradyn Brown had a big night catching the ball and opened the scoring with an 11-yard touchdown on fourth down and 8. He ended up bookending the night’s scoring by catching the game’s final touchdown pass as well.

“They played their hearts out,” Hancock said. “That’s all a coach can ask for.”

As the clock ticked toward halftime, Thatcher fans sat in stunned silence and may have contemplated their homecoming being upended by the smaller school from the west.

Those worries soon turned to loquacious cheers, however, as Thatcher owned the second half.

The Eagles came out of the break on a mission and marched down the field and scored on a 2-yard run by Brock Jones. 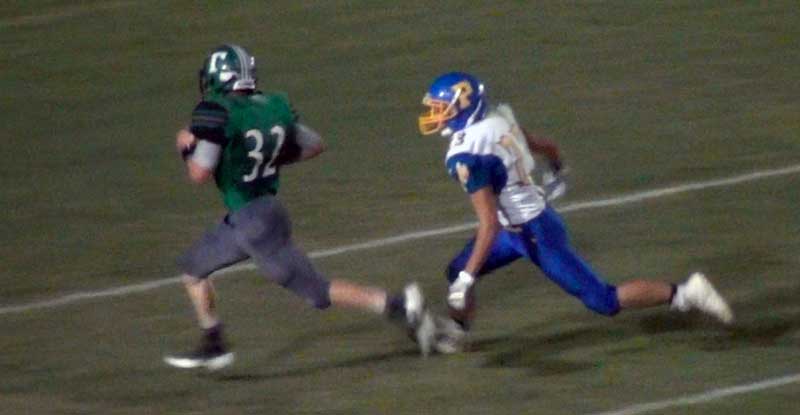 On the Roughriders’ next possession, Bretton Dodge dislodged the ball from the runner and Kortsen picked up the fumble on one bounce and ran it back for the score, giving Thatcher a 22-6 lead early in the third quarter. One other factor different from the first half was the absence of Pima’s starting center and tackle, who both suffered injuries.

“When we fumbled (and) they picked it up and ran it in that really took the wind out of our sails,” Hancock said. 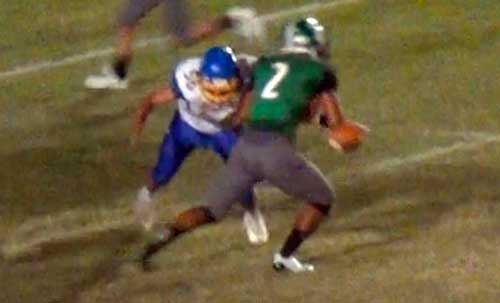 Pima bounced back behind the big arm of Whitaker and the sure hands of Brown as Whitaker danced in the pocket buying time for Brown to get wide open on a 54-yard touchdown bomb, lowering the score to 22-12. Pima would get no closer.

The big, green, offensive machine then kicked into overdrive as Jones punched in a 3-yard TD, followed by a Roebuck to Kortsen 34-yard touchdown reception, a Roebuck keeper 22 yards to pay dirt, and an impressive 47-yard jaunt by Jones, who somehow managed to shake one tackler, brush off another and then outrace everyone else to the end zone. 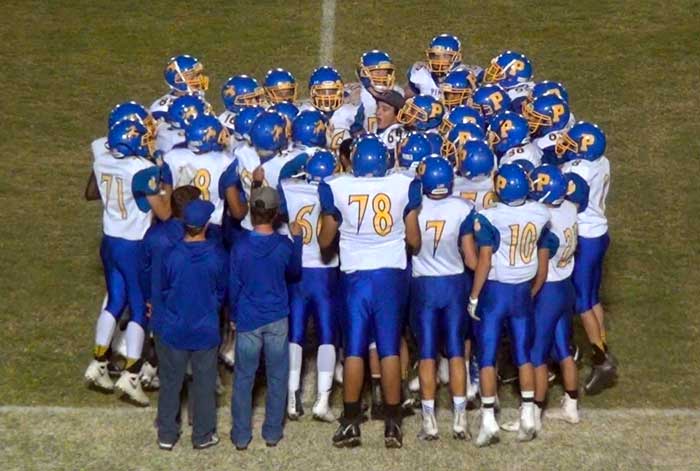 Pima never stopped playing, however, and Brown ended the night’s scoring with a  16-yard scramble reception for a touchdown, which was set up by a 59-yard end around run by Brown on the previous play. It was for naught for the Roughriders, however, as Thatcher prevailed yet again, 52-20. 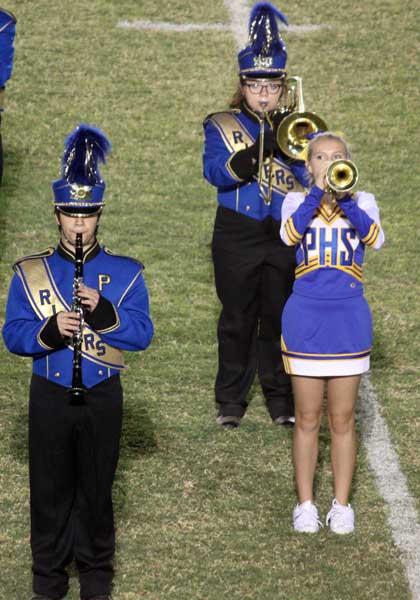 “I’d love to see them again, to be honest with you,” Hancock said. “I think we can regroup (and) correct a lot of things and come back out and play some football.”

Pima has a bye next week.

After winning their first two games of the season, the Safford Bulldogs (2-3 conference, 2-3 overall) continued their slide against very tough teams and lost to the Florence Gophers (4-0 conference, 5-0 overall) 61-7 for their fourth consecutive loss. Safford will host the Coolidge Bears (1-4 conference, 1-5 overall) next week. The Bears lost to Benjamin Franklin (5-1 conference, 5-1 overall) on Friday, 39-10. 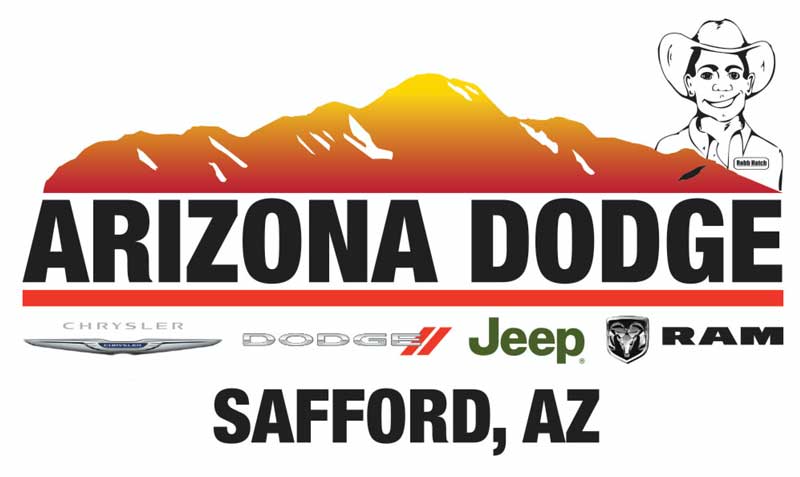 Special thanks to our sponsor Arizona Dodge for making this game story and highlight video available. Come down to the showroom at 1623 Thatcher Blvd. to see all the great vehicles and deals today.