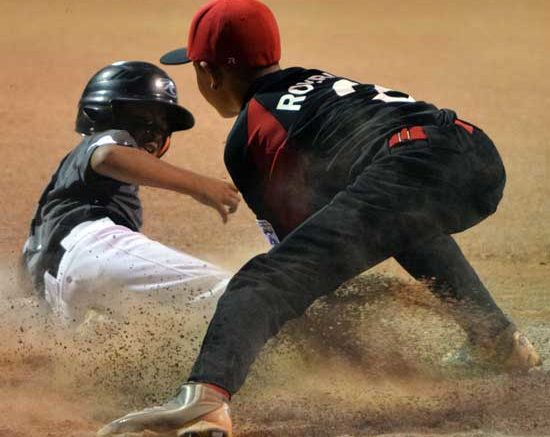 Photo By Raymundo Frasquillo: Mount Graham lead-off batter Derek Nabor slides in under the tag at home to score the game’s initial run. Morenci-Clifton would win the game, however, 2-1 on a walk-off homer.

SAFFORD – In football its the last-second touchdown; basketball has a three-pointer to win it all, and in baseball children pretend to hit the game-winning, walk-off homer to bring home the championship. For one Little League All-Star, that dream came scenario came true as Morenci-Clifton’s Daylen Johnson stepped up to the plate and had the biggest hit of his life during the District 11 tournament Saturday night at Safford High School’s softball field. 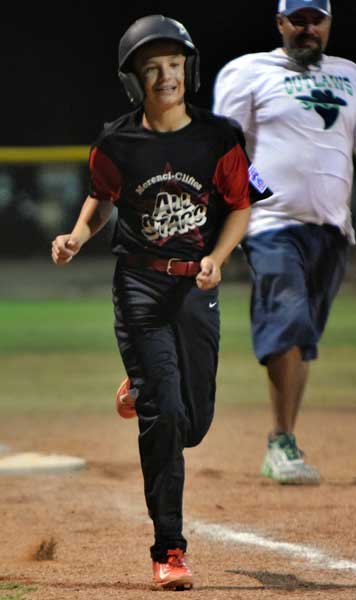 Photo By Raymundo Frasquillo: Morenci-Clifton Little League All-Star Daylen Johnson is all smiles as he rounds third base and heads for home after hitting the game-winning home run.

The first batter in the bottom of the sixth inning, Johnson stepped to the plate with a 1-1 deadlock, drilled a 2-1 pitch over the 200-foot left field fence, and the game was declared over as soon as he touched home plate. He left the field with an ear-to-ear smile and the game-winning ball. Morenci-Clifton advanced to the winner’s bracket by edging Mount Graham 2-1 amidst numerous wind delays.

Mount Graham scored the game’s initial run with its’ lead-off batter Derek Nabor singling on, advancing to second and third on separate passed balls, and scoring on a one out third passed ball. A strikeout and fly out halted further scoring. The Graham County team went three up and three down in the second inning and grounded into a bases loaded fielder’s choice with two outs in the third.

Morenci-Clifton tried to score on a two-out double but was thrown out by a relay from centerfield during the first inning and a strike out with two outs retired the side in the second. The Greenlee County team knotted the score in the third with number nine batter Michael Casillas, who reached first after getting beaned, advanced to second on a passed ball, took third on a Joseph Seballos’ double and scored on a one-out wide throw home.

Mount Graham singled with two outs in the fourth and was walked to get runners on second and third, but a strikeout squelched the threat. A three up and three down fifth led to a one-out walk in the sixth, followed by successive strikeouts.

Photo By Raymundo Frasquillo: Mount Graham reliever Wyatt Stahl struck out five, walked one, gave up a hit, and left with a 40-pitch count while facing 10 batters during 2 2/3 innings.

Morenci-Clifton also went three up and three down in the fourth but got a two-out walk followed by a strikeout in the fifth to set the stage for its final plate appearance of regulation play.

Kearny and Mount Graham both droped to the consolation bracket, and will face the losers of Monday night’s game on Tuesday (June 27) to continue the double-elimination meet. The championship game is slated for Friday, June 30 at 6:30 p.m. or, if needed, Saturday, July 1 at 6:30 p.m.