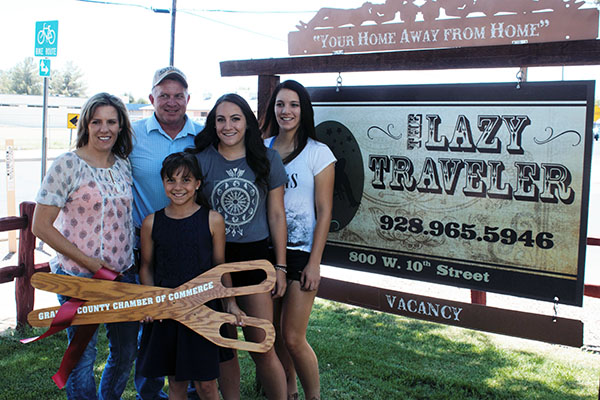 Jon Johnson Photo/Gila Valley Central: The Lazy Traveler family, from left, Frances Martinez, Jeff Taisto, Jaidyn, Jessica and Genesis Martinez, invite travelers and those who seek unique accommodations to experience their inn, which mixes the best of the old with modern conveniences.

SAFFORD – At the corner of 8th Avenue and 10th Street sits a historic building that has been transformed into one of the most unique places to stay when visiting the area.

The Lazy Traveler, located at 800 W. 10th Street, hails itself as “Your home away from home.” Owners and operators Jeff Taisto and Frances Martinez spent the last two years renovating the former Safford Hospital, originally built in 1920, into a bed and breakfast inn with 14 unique rooms for rent along with a 2-bedroom adjoining guest house. Their journey began in October, 2013, when Martinez noticed a for sale sign stapled on a tree at the property as she drove by to pick up her daughter from soccer practice.

“I told Jeff, ‘I want to go see what that building looks like,’ because I wanted to be nosey, that was it,” Martinez said. “I had no inkling to be a business owner.”

After touring the facility, Martinez and Taisto decided to take a chance on what they could create. Martinez wrote a business plan with the help of the Eastern Arizona College’s Small Business Development Center, and six months later they closed on the property and opened up the rooms that were ready for guests.

With both working other full-time jobs, Martinez and Taisto enlisted their daughters, Genesis, Jessica and Jaidyn Martinez, to help run the business as they renovated the rest of the property. The results were so good the girls have stayed on to help manage the inn.

The building is a unique mixture of original items, such as the wood floors, staircase and numerous historic nick knacks, mixed with modern accouterments, including flat screen televisions with DirecTV, mini refrigerators and microwaves in every room along with free Wi-Fi. Guests are also welcome to use the building’s kitchen for cooking as well as the laundry room in the basement at no charge. Guests are truly treated like family and are given a key to the front door and their room. They are then left to enjoy themselves without interruption with the knowledge that assistance, if they should need it, is just a phone call away.

The rooms themselves are an eclectic historically-themed variety and no two are exactly alike. Rates differ from smaller rooms with shared bathroom facilities to the larger suites with private facilities and are generally priced from $135 to $250 per week. One of the rooms sports a mural of Mount Graham that was reportedly painted by an escaped inmate who was hiding out from law enforcement. 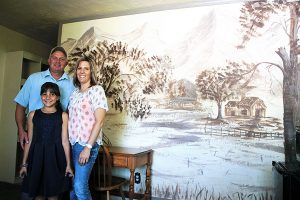 Jon Johnson Photo/Gila Valley Central:
The Lazy Traveler owners and operators, from left, Jeff Taisto, Jaidyn Martinez and Frances Martinez stand in front of a mural of Mount Graham reportedly painted by a prison escapee while on the lam. The mural is in one of 14 rooms available for rent.

“I was going to paint over it,” Taisto said. “But the story is way back there was an escapee from one of the prisons staying here with nothing to do and no place to go, so that’s what he did, he painted.”

For more information or to check room availability call The Lazy Traveler at 928-965-5496 or check out its Facebook page.