SAFFORD – The tranquility of a quiet Safford neighborhood was disrupted Wednesday morning when officers with the U.S. Department of Homeland Security (DHS) performed a federal search warrant.

According to various neighbors, a large contingent of officers wearing uniforms labeled “Police HSI” descended upon the neighborhood at about 9:30 a.m. The acronym stands for Homeland Security Investigations, which is the investigative arm of the DHS. 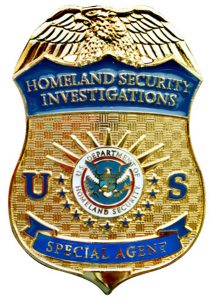 The officers performed a search warrant on the residence at 828 Kimball Ln. and seized evidence but did not make an arrest. Safford Police Chief Joe Brugman confirmed the action was taken by HSI and that his office was notified the day before the warrant execution. Safford officers were on scene in a liaison role only, and Brugman politely declined to comment on the results of the search due to it being another department’s action.

The resident of the home told authorities that the federal agents took his computers and thumb drives, according to a Safford Police report.

U.S. Immigration and Customs Enforcement Public Affairs Officer/Spokesman Yasmeen Pitts O’Keefe confirmed the search to Gila Valley Central but declined to comment further due to the nature of the investigation.

“Because this is an open and active investigation, I can’t give you any additional details,” O’Keefe said.

According to its website, HSI has broad legal authority to enforce a diverse array of federal statutes. It uses that authority to investigate all types of cross-border criminal activity, including: