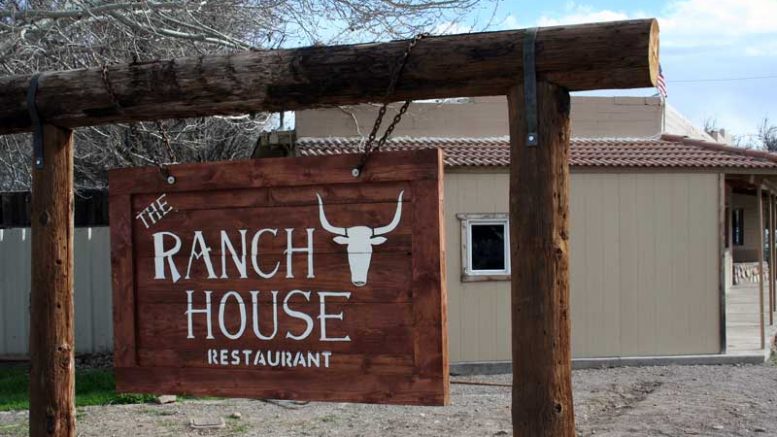 Photo By Gualterio Casias: A long horned steer's head is the logo of the Ranch House Restaurant in Duncan. It is conveniently located on U.S. Highway 70, which runs through the center of town. The Ranch House opened recently and is attracting many locals, as well as visitors, for breakfast, lunch and dinner. The restaurant may be reached by calling (928) 359-2643 or by email at theranchhouse17@gmail.com.

Steaks are hand cut, all else is homemade

DUNCAN – Charlie Carson did not give the Ranch House Restaurant a thumbs up. He was too busy eating his meal of steak, shrimp and french fries that filled his plate. He did, however, take a break from chewing and swallowing to rave about the special sauce he had poured on his steak and shrimp.

“This is mighty, mighty good,” said the long haul trucker from Mississippi, who was destined for California.

The sauce’s ingredients are a secret of the Ranch House that recently opened in Duncan. Karla Ellis and husband Stan have totally refurbished the restaurant that was formerly known as Ol’ Jo’s and then the Tumbleweed Café. The Ellises are proud not only of the new look the restaurant has, but also the food they serve. The menu, counting the cover, is five pages long and has a wide variety of offerings. It includes fare for breakfast, lunch and dinner.

Steaks are hand cut and french fries have the skins on them. Mashed potatoes are homemade and Karla Ellis said she would not have it any other way. The chile used on enchiladas and other Mexican delights is also homemade. It has a bit of a bite to it that a chile aficionado will appreciate, but not so much of a kick as to burn a person’s taste buds. 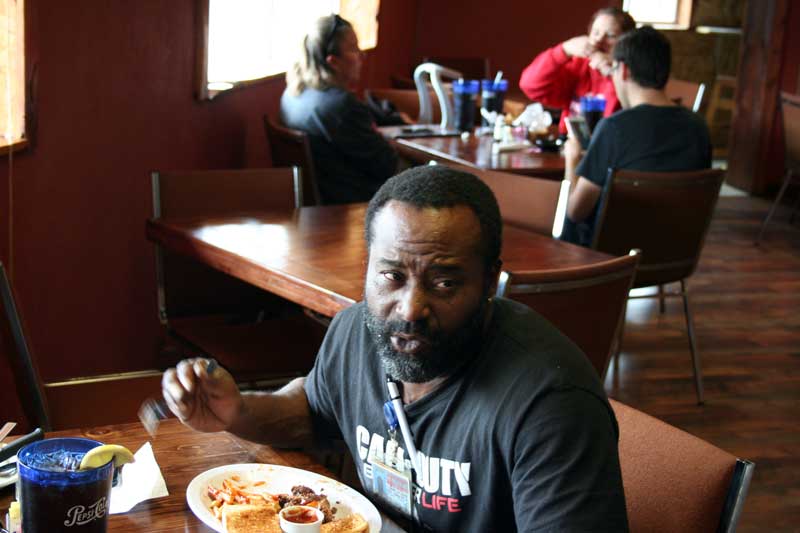 Photo By Gualterio Casias: Long haul trucker Charlie Carson, of Mississippi, enjoys his meal of steak, shrimp and french fries at Duncan’s Ranch House Restaurant. He used words such as “perfect” to describe his meal and the secret sauce accompanying it. The renovated restaurant is located at the former site of Ol’ Jo’s and the Tumbleweed Cafe.

Desert? All pies and other deserts, including carrot cake, are homemade.

Ellis asked Carson what he thought of the steak, shrimp and fries. He pronounced them as “perfect,” adding, “There are no better fries.” He said that in his profession he has come to know what is and is not good food. “This is very good,” he said as he prepared to take another forkful of steak.

Carson, 48, came to Duncan in a rather roundabout way. Big rigs such as his usually take Interstate 10, enroute to the west coast or east coast, but were rerouted that day, Feb. 26, due to a crash that closed the freeway, which passes through Lordsburg, N.M., 32 miles east of Duncan,. That meant traffic was rerouted through U.S. Highway 70 and had to pass through Duncan to Safford and eventually back to I-10.

Carson’s was only one of numerous big rigs that passed through Duncan that day. There were so many of the rigs passing through it actually created  something of a traffic jam that was most unusual for this town of about 700 people. The truck driver said he was hungry and when he saw the Ranch House sign that sports a steer’s head logo he knew he wanted to stop there and hopefully find a good, big steak – and that he did.

He said that while coming through Duncan on future trips will be out of his way, he feels absolutely certain he will return to the Ranch House. He said he is passing the word about the restaurant to other truckers. He also suggested to Ellis that she put up a sign, perhaps on the edge of town, saying “Trucker’s Special.”

Why not? The freeway was recently closed four times in less than two weeks, due either to a crash or blowing dust that obscures drivers’ visibility. All four times big trucks had to go through Duncan. 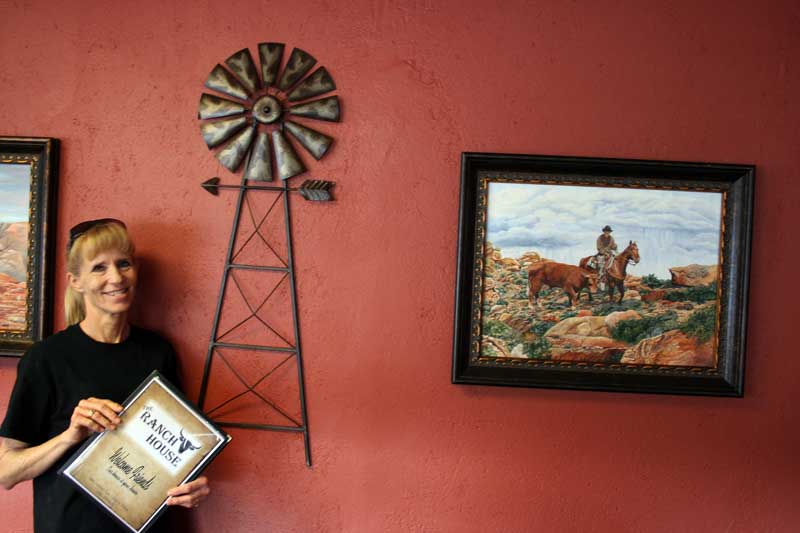 Photo By Gualterio Casias: Karla Ellis, who with husband, Stan, opened the Ranch House Restaurant in Duncan, displays some of her original artwork.

The Ranch House has been a big hit in Duncan and the surrounding area, according to Duncan Town Councilor and business owner Doug Barlow. “It’s really taken off and those folks (at the restaurant) are busy for breakfast, lunch and dinner,” he said. “It really has added something to our community.” He said he hopes the word about the Ranch House spreads throughout Greenlee and Graham counties. Barlow took pride in saying that a couple called from Safford to make a reservation because they had heard how good the restaurant’s food is.

Barlow said it makes a big difference that the Ellises are from the Duncan area and know what kind of food people like.

He also said he told a Clifton couple about the Ranch House. They stopped by a few days later. The wife had a cheeseburger with fries and the Ranch House secret sauce. She said, “It was dynamite and to die for.” Her husband had an order of beef enchiladas with red chile.  He said the enchiladas “were right on the money,” especially with the chile being spicy and not bland “like you get at most restaurants these days, especially in the city.”

Along with a new floor covering, the Ranch House’s walls have been painted and some of Ellis’s original  paintings – cowboy art – are displayed. A replica of a windmill also hangs on a wall.

A closed off section behind the restaurant remains from days past. It has potbellied stoves and bench-like tables and some décor that goes back to days when Lordsburg and Duncan enjoyed more prosperous days. On one wall is a metal black and yellow sign advertising the Hotel Hidalgo in Lordsburg. The sign boasts that baths are $2 and $2.50. It appears to be quite older than motel and hotel neon signs of the 1950s and early ‘60s that bragged about having “refrigeration,” which came to be known as air conditioning. 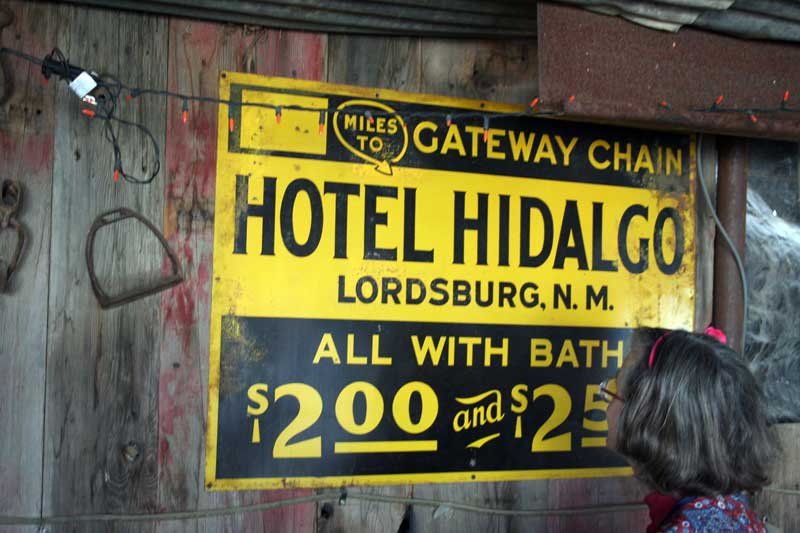 Photo By Gualterio Casias: A customer looks at a very old metal sign adorning a wall in the back room of the Ranch House Restaurant in Duncan. The sign advertises the Hotel Hidalgo in nearby Lordsburg, N.M. Note the sign boasts rooms including baths for $2 and $2.50. It obviously predates motel and hotel neon signs of the late 1950s and early ’60s, when “refrigeration” was a big plus for travelers. Today that feature is known as air conditioning.

Customers may opt to eat their meals in the back room. Smoking is allowed in the section as it is completely sealed off from the restaurant. The backroom also has a bar for those who like to have beer with their meals.

The Ranch House may be contacted at (928) 359-2634 or email at theranchhouse17@gmail.com for more information or to make reservations.