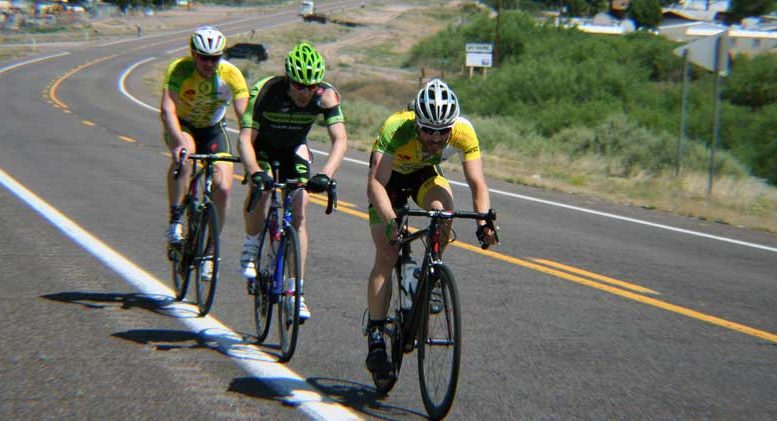 Photo By Gualterio Casias: Three cyclists leave York Valley about 15 miles from the finish line in the 72-mile course of the fourth annual Javelina Chase on May 6. They zipped by on flat areas and powered their way up hills toward the finish line at the Greenlee County Fairgrounds in Duncan.

The fourth annual Javelina Chase was undoubtedly a success. About 200 bicyclists from all over Arizona and elsewhere came to Duncan, a remote small town in southeastern Arizona, for the event. At least in the world of bicycling, it certainly put Duncan on the map.

John Lieberenz, one of the principle organizers of the Javelina Chase, had a somewhat different point of view about the event’s success. He said he measured it by the fact that nobody was injured.

“Everybody made it back safely,” he said. “That, to me, spelled success.” 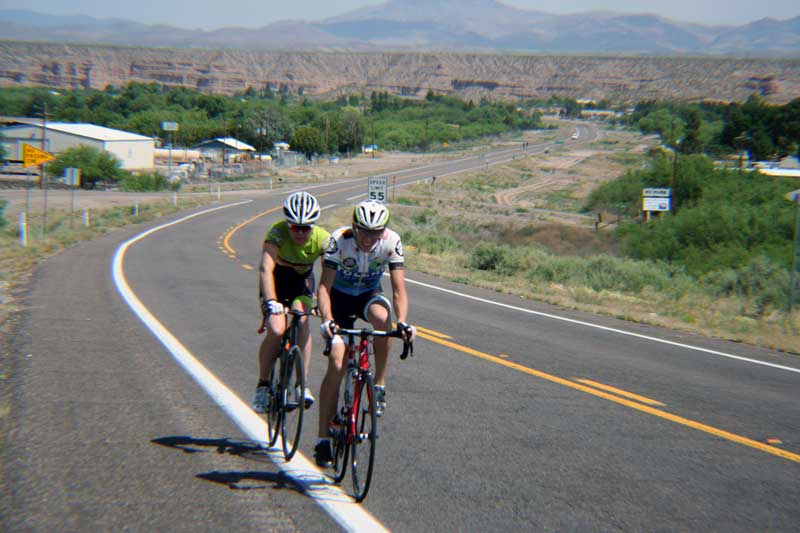 Photo By Gualterio Casias: Two competitors begin the climb out of York Valley during the 72-mile race of the Javelina Chase on May 6. They worked hard in climbing several steep hills over the course. The start and finish lines were at the Greenlee County Fairgrounds in Duncan.

Lieberenz said there were a few minor injuries – cuts and scrapes – but none of those occurred during the Chase.

The point would have been hard to argue with. There were at least four different courses the 200 racers could choose in which to compete. For most, the courses were not a casual ride. The Chase involved the Arizona State Championships. It also provided a means for racers to build up points toward their rankings in bicycle racing. 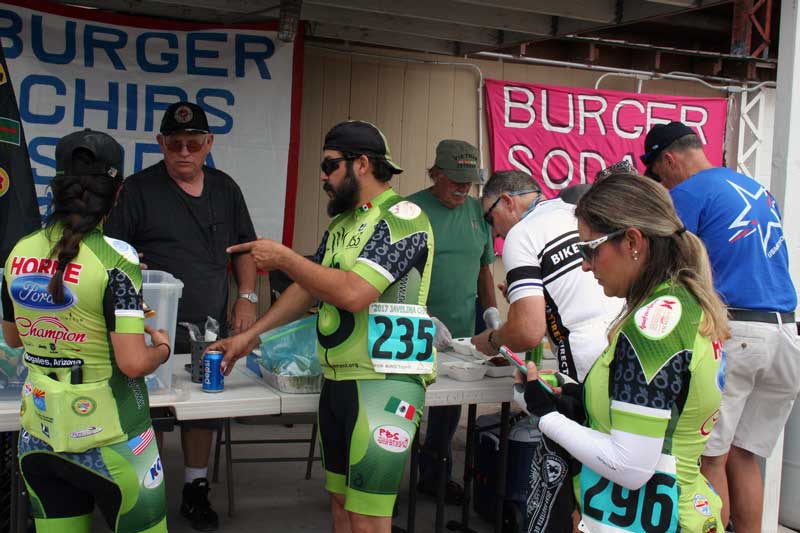 Photo By Gualterio Casias: Racers down some hamburgers made by veterans after the event.

Regardless of the length or difficulty of each race, bicyclists went all out in their efforts.

Safety was undoubtedly a major issue for those who rode the 72-mile course. It ran from the starting line at the Greenlee County Fairgrounds, over U.S. Highway 70, on to U.S. Highway 191, then to State Route 75 and down toward the finish line at the fairgrounds. From start to finish, the 72-mile course passed through steep hills to the intersection of U.S. 70 and 191 and at 3-Way junction from 191 to SR 75 in Duncan.

On SR 75, a section between York Valley and Duncan had several hills to climb. An observer who has countless times driven the road from York to Duncan followed or drove slightly ahead of racer Lynn Orchard, of Tucson, who had become separated from his teammates. 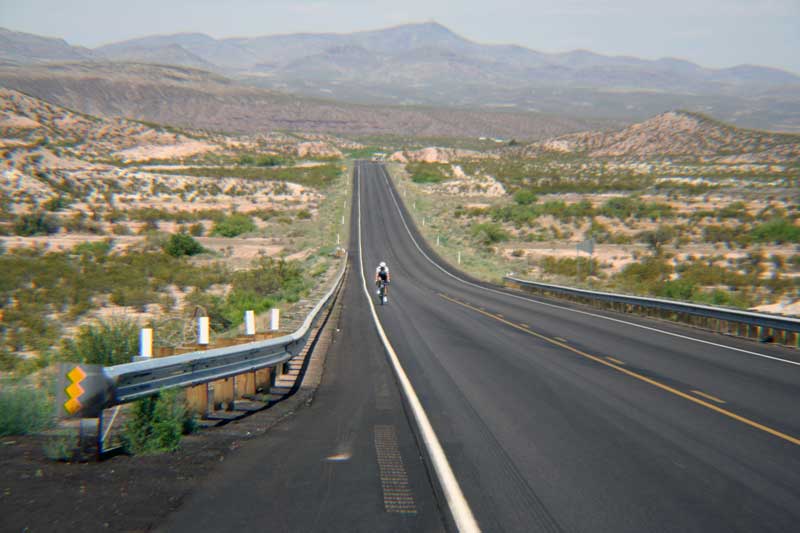 Photo By Gualterio Casias: Bicycle racer Lynn Orchard makes his way up a steep hill on State Route 75 between York Valley and Duncan during the fourth annual Javelina Chase on May 6. Although Orchard is by himself in this photo, he was not that far behind his teammates who were heading to the finish line at the Greenlee County Fairgrounds in Duncan, where the race also began. Orchard was riding in the 72-mile course of the event.

“You drive that road and you don’t think much about the hills,” the observer said. “Driving at a far slower speed keeping pace with a cyclist, you see the road from a whole different perspective and just how many steep hills there are to climb. You can see why any of the racers must have felt a real sense of relief when they finally dropped down into the Duncan Valley and were within sight of the finish line.” 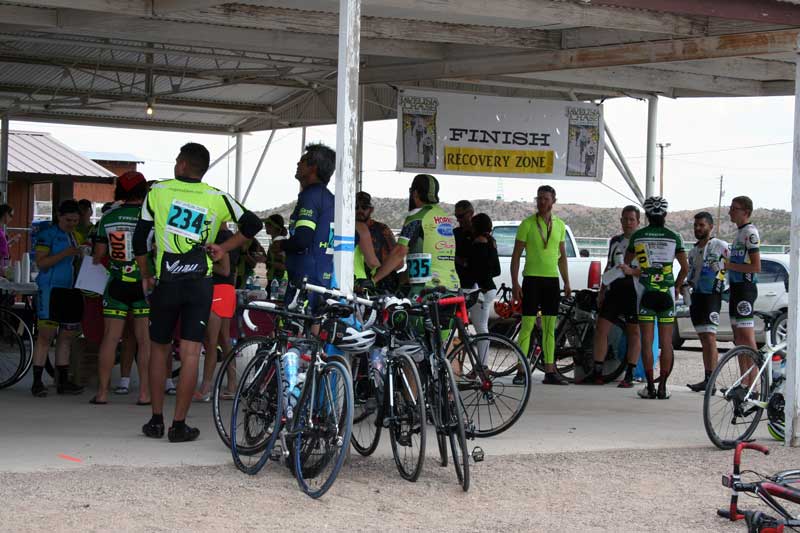 Photo By Gualterio Casias: Racers gather under a ramada after finishing the course.

Danger? Racers were accompanied by Arizona State Highway troopers through most of the course. They cleared the way with their flashing red a blue lights and motorists obediently pulled over to the side of the road. Greenlee County Sheriff officers directed traffic at key areas.

However, there were some cyclists who were well behind the main body of racers and did not have patrol vehicles to clear the way, but nobody reported having had any problem with traffic. In fact, a photograph taken of three racers coming off of the Gila River Bridge (El Puente) near 3-Way junction shows a blue semi- truck following at a close, but apparently safe, distance. 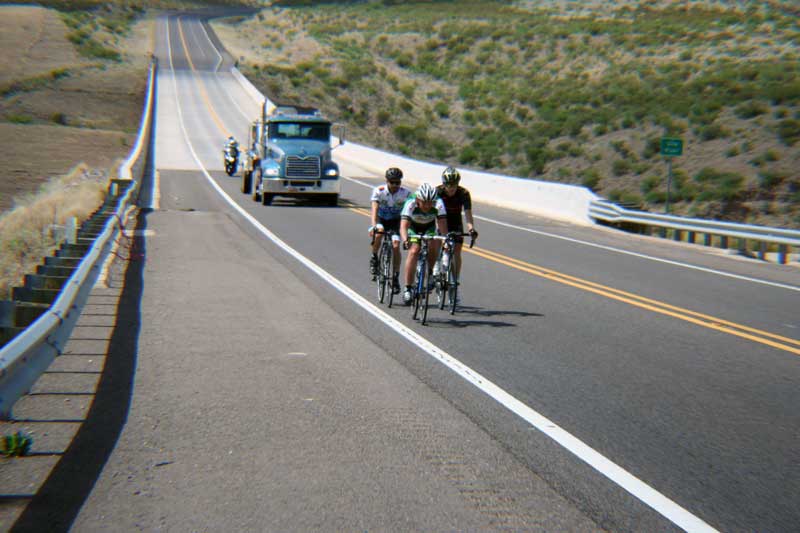 Photo By Gualterio Casias: The semi-truck looks quite imposing as it follows three bicycle racers as they cross the Gila River Bridge (El Puente) near 3-Way junction in the fourth annual Javelina Chase on May 6. The trucker kept his distance and the racers safely turned from U.S. 191 to State Route 75, about 20 miles to the finish line at the Greenlee County Fairgrounds in Duncan.

There was plenty or relief to be had after crossing the finish line. Hundreds of bottles of water were slammed down by racers to quench their thirsts. Most made their way to the fairgrounds’ ramada and either stood or sat in the shade. A few, such as Eric Collins and Francis Horton, relaxed fully stretched out on the cement floor. Neither looked strained, only well-worn and tired. They were just kicking back. Near them, Alissa Albrecht, of the Sabino racing team, and Ellie Wood, of Sabino Cycles, sat and chatted about their experiences in the race. The men and the women all wore smiles or were laughing about some particular experience. 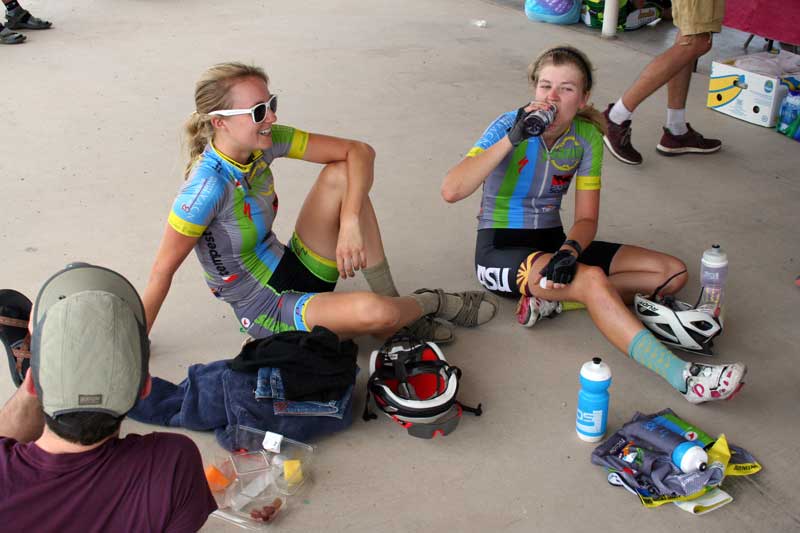 Photo By Gualterio Casias: Alissa Albrecht, left, of the Sabino Racing Team, and Ellie wood, of the Tolero team, take a well-deserved rest as they exchange details of racing experiences in the fourth annual Javelina Chase on May 6. The ladies are resting on the cement floor of the ramada at the Greenlee County Fairgrounds in Duncan, where the Chase started and finished.

They were hungry after all that effort. Cyclists surrounded the Mares Bluff Veterans Memorial food booth. The veterans manning the booth, all Vietnam War vets, sold hamburgers, sodas and chips. It was the only food booth at the fairgrounds, and the vets were swamped with orders for burgers. They received several compliments about the quality of the think, juicy burgers. 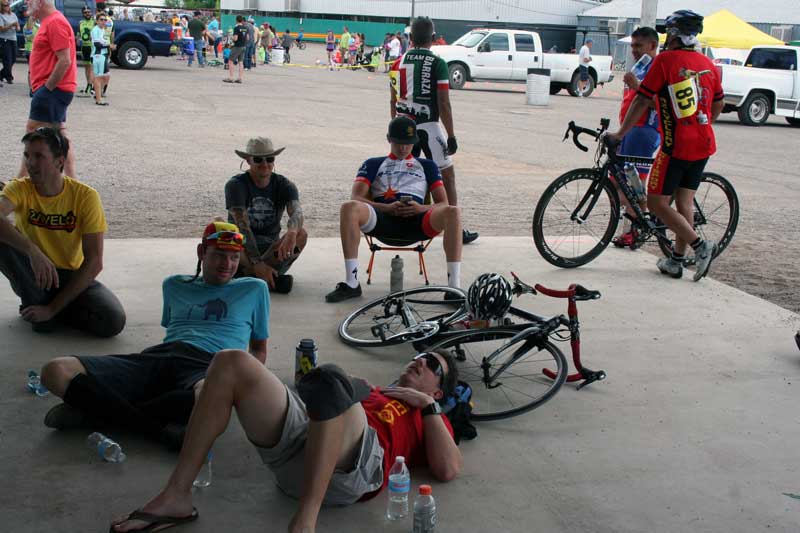 Photo By Gualterio Casias: Two of the bicycle racers participating in the fourth annual Javelina Chase in Duncan on May 6 lie on the floor after the end of the event. They are Eric Collins (in red) and Francis Horton (in blue). Many of the 200 racers who participated in the Chase found comfortable spots to kick back and cool down on the ramada floor at the Greenlee County Fairgrounds.

While competitors were on the road, a Bicycle Rodeo was held at the fairgrounds. About 70 local children participated. All proudly wore their light green T-shirts with the event’s logo printed on the front. The rodeo’s objective was to teach children bicycle safety. There was a gentle obstacle course in which riders weaved their way around bright orange traffic cones. Other activities included riding over a small ramp. Children rode onto the ramp, which front gently dropped forward as it was crossed. 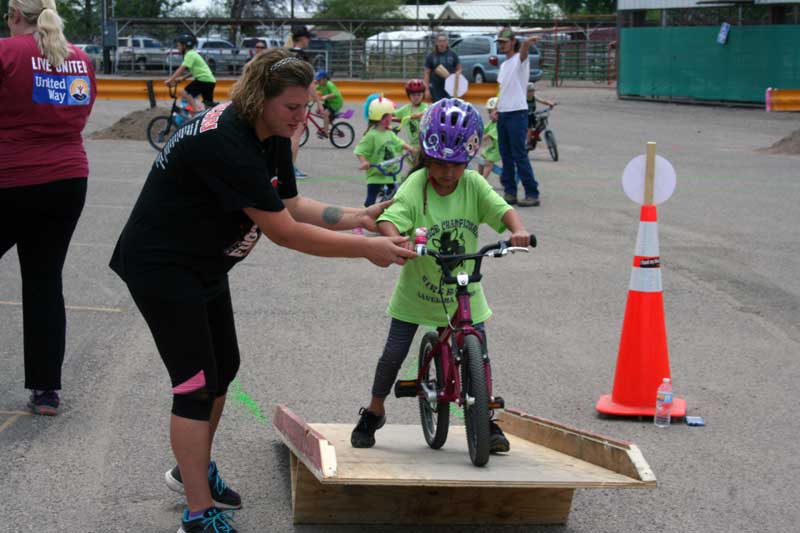 Photo By Gualterio Casias: A volunteer helps this youngster who concentrates on negotiating a ramp at the Javelina Chase Bike Rodeo. The event highlighted bicycle safety to the many children who participated.

Volunteers helped younger children as they approached and crossed the ramp. The exercise was aimed at improving youngsters’ confidence.

A crowd of children, along with some parents, stood before a podium from which volunteers announced award winners. Many fidgeted as they stood and no doubt hoped their names would be among those announced. As they waited, a young mother with her toddler in a stroller passed in front of the crowd and drew the attention of many. The child, in turn, looked at the crowd of children in what appeared to be a look of amazement – or at least a deep curiosity. 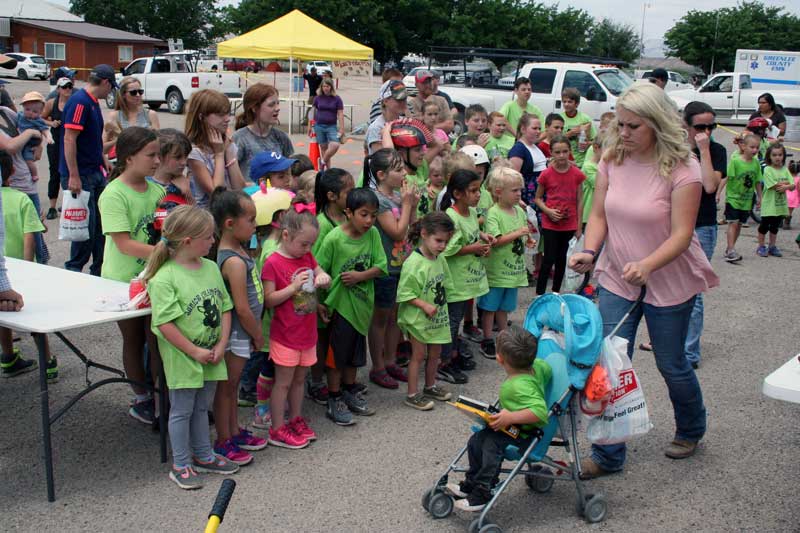 Photo By Gualterio Casias: A youngster catches the attention of some participants standing during the awards ceremony at the Bike Rodeo, which was part of the fourth annual Javelina Chase on May 6.

In the meantime, adults who participated in the Javelina Chase’s various races gathered under the ramada to receive their respective awards. Within an hour, everyone participating headed for home –to Phoenix, Tucson, Bisbee and other parts of Arizona. 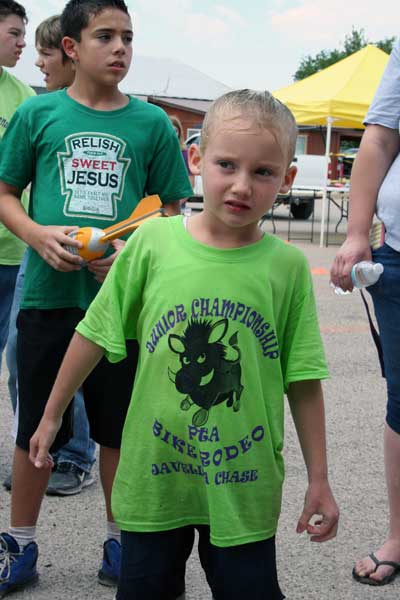 Photo By Gualterio Casias: A participant in the Bike Rodeo looks to cool off after the event.

Lieberenz, who with wife Pam headed up the event’s organization, pointed to the many volunteers who “put in some long hours and hard work” to make the event possible.

Lieberenz said the number of cyclists, 200, was about same number as those who participated in the 2016 Javelina Chase. There were those such as Duncan Town Council member Doug Barlow, who termed the event and the turnout as “fantastic.”

“Little Duncan (population of about 700) has gotten quite a bit of attention and notice through the Javelina Chase,” Barlow said. “It’s wonderful for the town and for Greenlee County (which is the least populous Arizona county). Word about the Javelina Chase, Duncan and Greenlee County is getting out there to the rest of Arizona, and we’re delighted and appreciative of that fact.”

He recalled how in its first year there were only 24 racers involved in the event. Barlow laughed and said, “Yeah, I think you can say it’s growing and it definitely has quite a future as more people around Arizona and elsewhere catch on to what’s happening here.”

Information, such as race winners and other details were not available as of press time. Look for those in future coverage of the Javelina Chase.