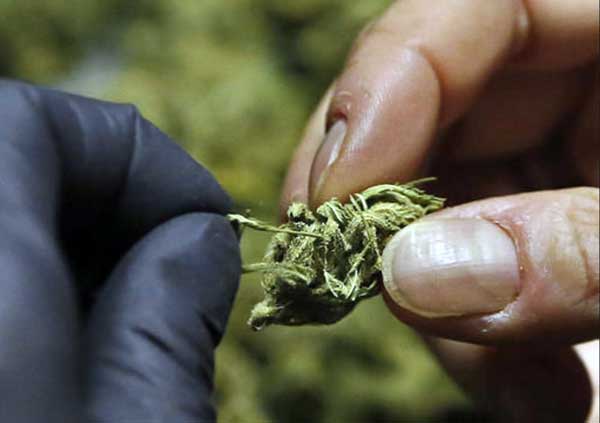 AP Photo: Despite passing in four other states, Arizona has apparently rejected an initiative to regulate marijuana like alcohol.

PHOENIX — Voters in several states across the nation decided their residents should have more access to marijuana — except Arizona.

Unofficial totals from Tuesday’s election show Proposition 205 failing by more than 80,000 votes out of more than 1.9 million ballots cast.

Yet similar measures to allow adults to buy and use marijuana for strictly recreational use were approved in California, Maine, Massachusetts and Nevada. And voters in Florida, Arkansas and North Dakota agreed to allow marijuana for medical use, something Arizona has had since 2010.

So what went wrong here?

Pro-205 spokesman Barrett Marson was not answering questions, insisting there are enough uncounted votes — close to 630,000 statewide as of Wednesday afternoon — to potentially push the measure over the top. But with the margin between supporters and foes having remained relatively static throughout the counting, Marson conceded “it’s a tough hill to climb.”

At the national Marijuana Policy Project, which provided the largest donation to the Arizona effort, the focus was on regrouping for another fight.

“The strategy in Arizona is certainly to try again,” said Rod Kampia, the organization’s executive director. “What that looks like hasn’t been determined.”

Ditto when that will happen.

Kampia said it could be as soon as 2018. But he said 2020 might be more favorable, what with a generally higher turnout in presidential election years.

As to what happened Tuesday, Kampia said the loss here came down to resources.

“Money matters in politics,” he said. “The governor of Arizona raised a wall of money in a way we have not seen in other states.”

Kampia said the estimated $6.1 million spent to kill Proposition 205 exceeds the tally of spending on anti-marijuana measures in Nevada, Massachusetts and Maine combined.

“Granted, we did raise a lot of money on our side out of necessity,” Kampia said. “We were still outspent.”

Donations reviewed by Capitol Media Services totaled $6.6 million. But much of that had to be spent in hiring paid circulators to get the signatures to put the measure on the ballot in the first place, an expense the other side did not need to match.

There may be another factor.

Nicholas Vita, chief executive of Columbia Care which operates medical marijuana dispensaries in Prescott, Tempe and elsewhere across the country, said the fact that Arizona already allows patients who need marijuana to buy and use it may have impacted the decision by voters not to expand the program to recreational use.

“When you’re dealing with a compassionate debate where somebody can really benefit and improve the quality of their life, that’s something that I think people feel very strongly about,” Vita said. “Recreational, it’s not as easy to get the same level of connection.”

Foes played on that point, saying those who need the drug can get it.

Existing law permits those with specified medical conditions and a doctor’s recommendation to obtain up to 2½ ounces of the drug every two weeks. More than 108,000 Arizonans are medical marijuana patients.

But much of the campaign against Proposition 205 was based instead on statements from officials in Colorado who legalized the drug for recreational use four years ago. While none claimed that Colorado voters are ready to repeal their law, they urged Arizonans to consider the detrimental effects of legalizing the drug and, if nothing else, wait a few more years to see how legalization is working out there.

Then there was the opposition of Gov. Doug Ducey who criticized the measure not only in public but at private events to raise money for the anti-205 cause.

“I don’t think that any state became stronger by being stoned,” Ducey said.

Another issue raised by foes of Proposition 205 is that the owners of medical marijuana dispensaries would have gotten priority for the limited number of licenses for recreational retail outlets. But Vita, who supported the initiative, said that preference made sense.

“You have people who are familiar with the business,” he said, and who know “how to operate within the confines of the law.”

Going forward, there also is the chance that there may be less need for a state-by-state effort.

Democratic Congressman Earl Blumenauer of Oregon, a supporter of legalized marijuana who campaigned for Proposition 205 here, said the fact that so many states now allow some form of legal use of the drug will put pressure on his colleagues to act at a federal level.