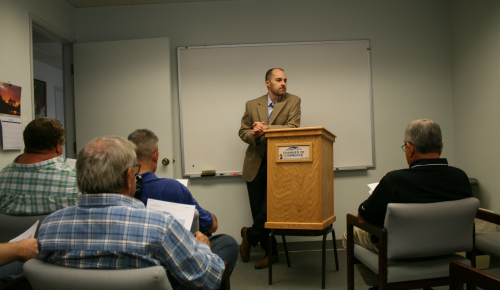 Brooke Curley Photo/Gila Valley Central: Gerrick Taylor addresses politicians and business owners at the Chamber of Commerce on Tuesday regarding propositions 205 and 206.

SAFFORD – Recreational marijuana and higher paid wages – two sensitive ballot issues that are on the mind of Arizona voters – were the hot topics at a lecture at the Graham County Chamber of Commerce on Tuesday.

The Chamber hosted a lecture by Gerrick Taylor, vice president of government relations for the Arizona Chamber of Commerce. Taylor discussed Proposition 205 and Proposition 206, which are on the upcoming November ballot.

Prop. 205, the Arizona Marijuana Legalization Initiative, would allow individuals to grow, possess and purchase marijuana from state-licensed facilities for recreational use.

Prop. 206 is the Arizonans for Fair Wages and Healthy Families Initiative. Prop. 206 would raise the state’s minimum wage pay to $12 per hour by 2020, beginning with an increase to $10 per hour in January, 2017. It would also require new paid leave mandates.

Taylor was adamantly against both Prop. 205 and 206. He started his lecture by discussing Prop. 205 and said the legalization of marijuana would cause public safety risks, protect special interest groups and endanger Arizona’s youth.

“Why does the Chamber of Commerce care? Why should the employers care? Certainly, the legalization of marijuana, it has public health implications,” Taylor said. “It has implications for our education system. It has law enforcement implications. Plus, our concern is accelerating the use of marijuana in your workplace.”

Taylor also argued against Prop. 206. He said that the increase in wages would stress smaller businesses, make it harder for the untrained and young to be hired and increase the use automation in the workplace.

According to a Cronkite News poll, however, most Arizonans favor the minimum wage hike by a 2-1 margin.

“We think it’s going to accelerate automation,” Taylor said. “Raising the minimum wage in such a dramatic fashion makes hiring more expensive. It makes it harder for you to bring new employees into your workplace.”

Graham County Superior Court Judge Michael Peterson was at the lecture and was also against Prop. 205 and Prop. 206. Peterson told Gila Valley Central that he believes marijuana is a gateway drug, leading many down the road to illegal drug use. However, he also said that the bill regarding raising the minimum wage would make it harder for individuals who have been in the justice system or on probation to find work.

“With respect to the proposition involving marijuana, I hope the good people of Graham County will recognize that it is fool’s gold,” Peterson said. “The reality is that it’s money driven. It’s by people from out of our state who are looking to make money in our state. The realities are that, unfortunately, many people (who) begin using marijuana in turn start using more harmful drugs. Mainly, the people I have to work with, unfortunately, start using marijuana and then start using other drugs like heroin. I don’t believe anybody when they tell me that marijuana is not a gateway drug. It is. With respect to the minimum wage proposition, from the standpoint of being the judge, I’m concerned that it will make it more difficult for people who have made mistakes in life and who are on probation to find work.”

What the initiative does:

What the initiative does not do:

Twenty-nine states and the District of Columbia now have a minimum wage higher than the federal minimum. Twenty-one states and D.C. have higher minimum wages than Arizona. Minimum wage measures also are on the ballot in Colorado, Maine and Washington. In Colorado and Maine, as in Arizona, the measures would increase the minimum to $12 over the next few years and then adjust it to the cost of living. The Washington measure, like the one in Arizona, would require employers to provide paid sick leave to their employees. The minimum would go to $13.50 in Washington by 2020. New York and California have minimum wage plans passed by their legislatures, which will lead to a $15 hourly minimum in small steps by 2022.

• Many minimum-wage workers, especially those with families, are barely earning enough to get by. The minimum wage has not kept up with inflation. The $8.05 rate brings in less than $17,000 a year, for someone who works 40 hours a week for 52 weeks.

• The measure will immediately help hundreds of thousands of workers, old and young, meet basic needs and living expenses. About 770,000 workers in Arizona make less than $10 per hour and 934,000 go without any paid sick leave.

• Increasing the minimum wage has benefits for businesses in improving worker morale and productivity, building a cohesive team of employees, reducing employee turnover and lowering recruiting and training expenses.

• Increasing the minimum wage increases the spending of low-wage workers, which, in turn, ripples through the economy, increasing the revenues of retailers and other businesses and boosting the economy across the state.

• The graduated increase in the minimum wage to $12 is likely to have only a low, if any, negative impact on employment levels.

• The measure could bring more unemployment because businesses, concerned with higher labor costs, might decide to eliminate jobs and/or reduce the number of people they hire.

• The measure could be especially devastating to small businesses because they have less ability to absorb inflated labor costs.

• The measure is likely lead to increases in the price of goods and services.

• The measure could encourage companies to invest more in automation in order to reduce the need for employees.

Jon Johnson contributed to this report.

Big changes in future for chamber of commerce