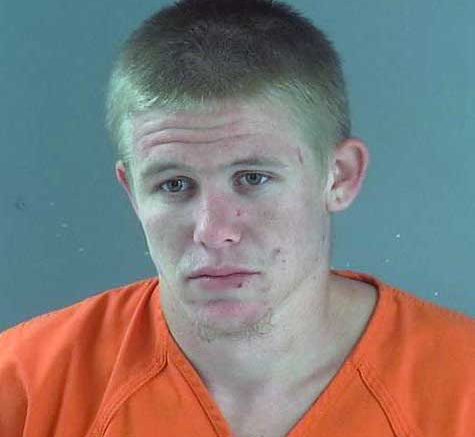 Dakota Alexander, 20, was booked into the jail on a charge of possession of drug paraphernalia after a store employee reported he was smoking meth in the restroom.

GRAHAM COUNTY – Convenience store restrooms can sometimes be not the most sanitary of places, but one usually doesn’t anticipate being exposed to airborne carcinogens.

Deputies were dispatched to Jo-Bi Convenience Market at 4520 S. U.S. Highway 191 south of Safford at about 8:43 a.m. on Nov. 2 regarding a person suspected of smoking methamphetamine in the store’s restroom.

According to an employee, the suspect, Dakota Alexander, 20, had been inside the locked restroom for roughly 30 minutes. After noticing multiple customers approach the restroom and then abruptly turn away, the employee knocked on the door but did not receive an answer.

After knocking on the door and not receiving an answer, the employee used a key to open the restroom door. Upon doing so, Alexander allegedly yelled that he was utilizing the facility and the employee closed the door. The employee said when the door was open he could see several propane torches. After the interaction, the employee called the police.

Alexander left soon after the employee opened the door, and he was not at the store when authorities arrived. A deputy soon spied him walking southbound on the western side of the highway while carrying two backpacks, and Alexander was taken into custody.

While Alexander allegedly admitted to recently smoking methamphetamine, he said he did not do so in the store’s restroom. A search of his backpacks yielded three brass torch tips, a propane bottle, a butane bottle, two butane torches, a small plastic bottle with a tube sticking out of it, several plastic tubes with apparent residue and a metal screen with apparent residue.

Alexander also allegedly said he planned on using the bottle to smoke meth but reiterated that he did not do so in the store. He said he used the torches to smoke meth but only had all the items on him because he was going to sell them. He said he wanted get rid of the items because after learning his girlfriend is pregnant he know has a desire to stop smoking meth.

Alexander was then placed under arrest and booked into the Graham County Jail on a charge of possession of drug paraphernalia. However, field tests on the screen and one of the tubes came up negative for methamphetamine. The alleged paraphernalia was submitted to the Arizona Department of Public Safety’s lab in Tucson for further testing.