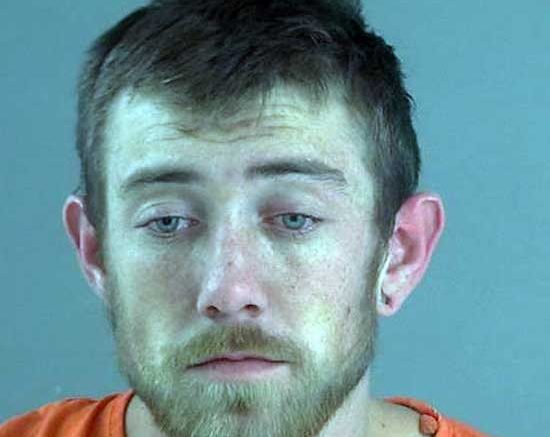 Contributed Photo/Courtesy GCSO: Tommy Pope was jailed after leading police on a chase exceeding 100 mph through the Safford and Solomon areas.

GRAHAM COUNTY – A motorcyclist on methamphetamine was speeding in a variety of ways the evening of Dec. 23, but he couldn’t escape the collaborative efforts of local law enforcement.

Tommy Pope, 27, of Safford, was arrested and booked into the Graham County Jail after exceeding 100 mph while fleeing from pursuing law enforcement. Pope was booked into the jail on just charges of aggressive driving, unlawful flight from law enforcement and an active warrant out of Safford Municipal Court for failing to comply on probation stemming from a drug paraphernalia guilty plea. Additional possible charges, including possession of a dangerous drug (methamphetamine), possession of drug paraphernalia, DUI-drug and aggravated DUI, are pending a review by the Graham County Attorney’s Office and blood test results. The County Attorney may also proceed with a charge of unlawful possession of weapons since Pope has previous felonies and is not legally allowed to possess certain weapons or ammunition.

According to a Graham County Sheriff’s Office Report, a deputy parked north of the Eighth Avenue Bridge clocked a motorcyclist (Pope) northbound on 8th Avenue at 67 mph in a 45 mph-zone at about 9 p.m. The officer initiated pursuit and witnessed Pope head east on Airport Road. Once there, the officer noted Pope continued to pull away from him as his patrol vehicle’s speedometer topped 100 mph. The officer reported Pope passed up another vehicle in a no-passing zone and seemed to be surprised when the officer continued his pursuit.

Another deputy attempted to block Pope at the railroad track crossing on Solomon Road, but Pope managed to negotiate around the parked vehicle.

Pope’s flight was then grounded when he entered into Safford as a collaborative group of Safford officers and a Thatcher officer formed their vehicles into a blockade at the intersection of U.S. Highway 191 (1st Avenue) and Solomon Road near Jensen Hill. With pursuing officers behind him and a blockade in front. Pope exited his motorcycle at gunpoint and was taken into custody.

When asked why he ran, Pope allegedly said that he just wanted to get home for Christmas and that his motorcycle’s brakes don’t work when cops are coming after him. He advised he didn’t want to stop because he had an active warrant for his arrest, the motorcycle wasn’t registered and he didn’t have a license to operate it.

While Pope advised he had only ingested “just some pot” that evening, the officers drug recognition training revealed he likely was under the influence of meth and a small quantity of the drug was found in the front pocket of a vest Pope was wearing. Officers also located a bolt with marijuana residue, a shotgun shell, two multi-tool knives and a rock hammer in Pope’s possession. While Pope said he didn’t own any guns, his Facebook page sports a picture of him holding what appears to be a Mossberg .20 shotgun.

The motorcycle was without a license plate and was not currently registered but did not come up as stolen. It was later towed from the scene and impounded.

Pope refused to submit to a blood test and officers were forced to procure a warrant. The blood was later sent to a lab for analysis.

After initially denying the meth was his, Pope allegedly admitted using it that day along with some weed. He was then booked into the jail.