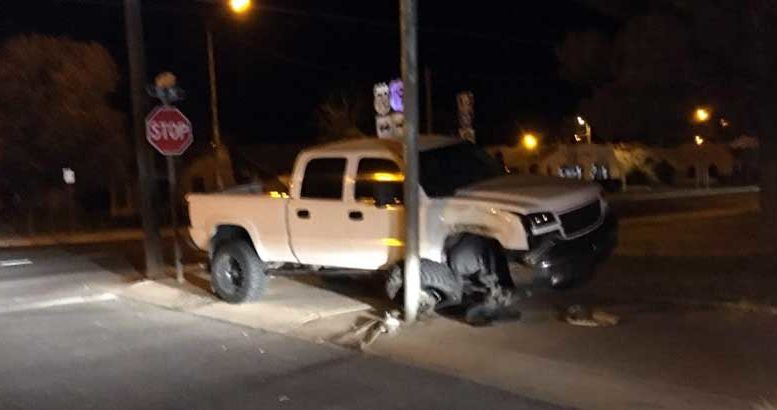 Contributed Photo: A man was arrested for DUI after allegedly crashing his truck into a light post while intoxicated.

SAFFORD – A night out with friends ended poorly as an allegedly inebriated driver wrecked his truck into a light pole in the early morning hours of Nov. 27.

According to a witness account, a white Chevrolet truck – later learned to be driven by Joseph Torrio – was northbound on 1st Avenue at about 4 a.m. when it suddenly swerved off the roadway and collided with a metal light pole just to the east of Main Street. The witness said he then saw two well-dressed women get out of the truck holding some sort of beverage cups exit the truck and flee from the scene.

As officers continued to investigate the crash scene, Torrio returned and said he had left to a nearby friend’s house to call the police. Gila Valley Central was not able to either corroborate or disprove his assertion.

Upon speaking with Torrio, the officer noticed an odor of an alcoholic beverage. Torrio allegedly said he hadn’t had anything to drink after the crash and that he had only drunk one beer at 11 p.m. the previous night.

After failing a field sobriety test, Torrio was administered a portable breath test that showed his breath/alcohol concentration to be at .104. He was then arrested for DUI and taken to the Safford Police Department, where he willingly submitted to a blood draw at about 4:30 a.m. for testing purposes. After completing a fingerprint form, Torrio was advised of pending formal charges for DUI and was released into the custody of his mother.

The truck was towed from the scene and the light pole was replaced.