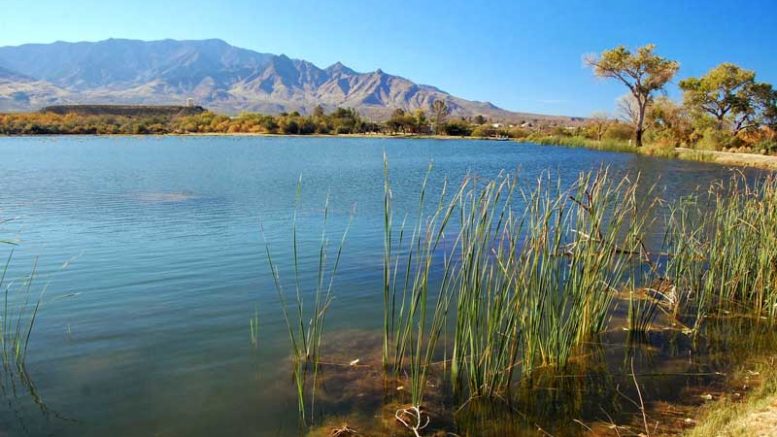 A date ended poorly at Dankworth Pond late Thursday night when an inebriated man wanted in Texas crashed a Chevy suburban into a tree.

DANKWORTH POND – First responders were dispatched to Dankworth Pond late Thursday night after a first date ended with a suburban crashed into a tree.

Deputies responded to the area at about 11:28 p.m. and located a man walking away from the crash scene. The man was later identified as Jeremy Vanocker, 32, and that he had a valid warrant or his arrest out of Colorado County, Texas issued April 18 for failing to appear on a charge of unlawful possession of a firearm by a felon in a weapon-free zone. The warrant has a $50,000 cash bond.

A female passenger was located still in the crashed, white, 1999 Chevrolet suburban and was assisted by a deputy. She was later taken to Mt. Graham Regional Medical Center (MGRMC), where she was treated for minor injury and released.

The passenger said she was on a first date with Vanocker and the two had been drinking shots at C&C Hideaway located at the intersection of U.S. Highway 191 and Highway 366 (Swift Trail). Afterward, the pair decided to go to Dankworth Pond and continue drinking there. 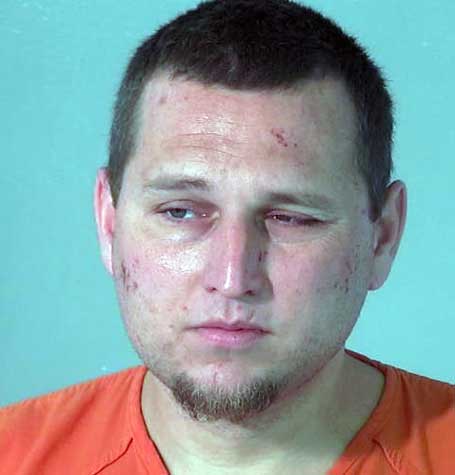 After a while, Vanocker appeared to become ill and repeatedly passed out and regurgitated. The passenger said she helped Vanocker lie down in the back of the suburban to wait off the effects of the alcohol, but he got impatient and tried to drive away. Faced with being left at the pond in the middle of the night alone in the dark or get in the suburban with a very intoxicated driver, the passenger, who was also intoxicated, got in the passenger seat and the suburban abruptly crashed into a tree. An inspection of the suburban also yielded a glass pipe with apparent drug residue and a usable amount of marijuana.

The area the crash took place was in a restricted part of the park open to authorized vehicles only, and the park closes at 10 p.m.

Vanocker appeared to be intoxicated and was combative with deputies, yelling obscenities at them and threatening to fight or kill them, according to Sheriff’s Office reports. He continued to resist arrest during transport to the jail, by kicking and screaming throughout. 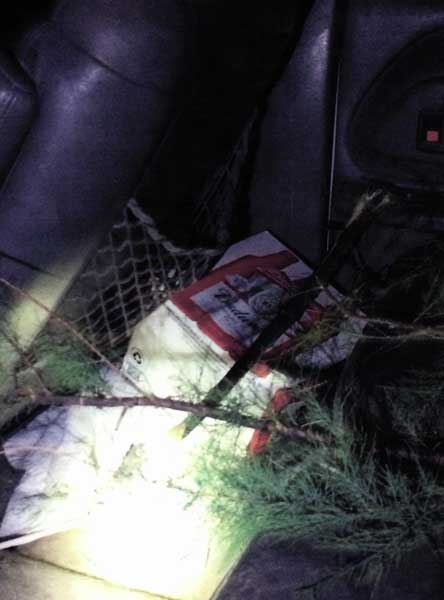 Contributed Photo/Courtesy GCSO: The interior of the suburban shows tree branches from the crash and a beer container.

Once at the jail, Vanocker was placed in a restraint chair but continued to be combative and would answer the intake officer’s questions by saying everyone there could fellate him, except he used cruder language. He also yelled at the other inmates and said he would fight them all. After threatening to spit on the officers, Vanocker was placed in a spit hood, and the jail said it could not accept him until he was medically cleared.

Vanocker was then taken to MGRMC, where he continued to be combative and spat on a health care worker’s face. He was then restrained in a hospital bed and continued to yell profanities until he was sedated.

Later on that day, Vanocker was transported back to the jail, where he was booked on charges of DUI, trespassing in the third degree, leaving the scene of an accident that caused injury, reckless driving, possession of marijuana, possession of drug paraphernalia, threatening or intimidating, aggravated assault, resisting arrest and his warrant.

Sierra charged with manslaughter in ATV death of daughter