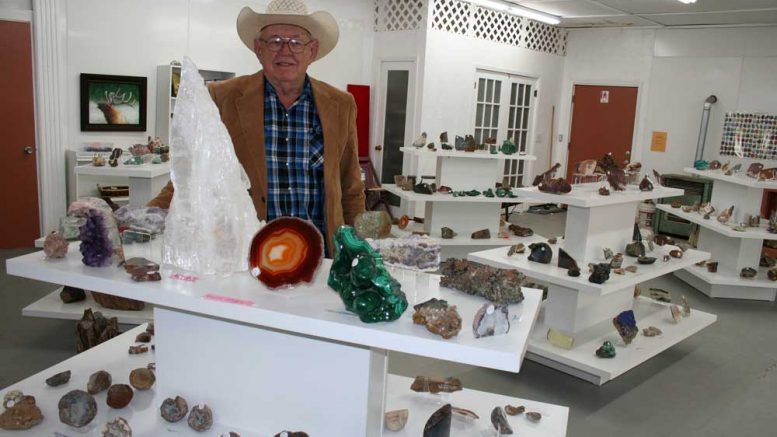 Photo By Walter Mares: Doug Barlow, owner of the Rock-A-Buy rock shop in Duncan, displays some of the beautiful, exotic rocks he has for sale. They include, from left, crystal amethyst, a huge white crystal of selinite, banded agate and a dark green specimen of malachite. The shop carries a wide variety of rocks, from large to smaller ones. The shop is located on U.S. Highway 70.

DUNCAN – It has been called a “gallery” and a “museum.” One Duncanite went so far as to call the shop a “community center” where locals gather to visit. Its formal name is the Rock-A-Buy rock shop. It is located in Duncan and is owned by Doug Barlow, a well-known figure in the community.

The Rock-A-Buy sits along U.S. Highway 70, which often carries quite a bit of passing-through traffic. 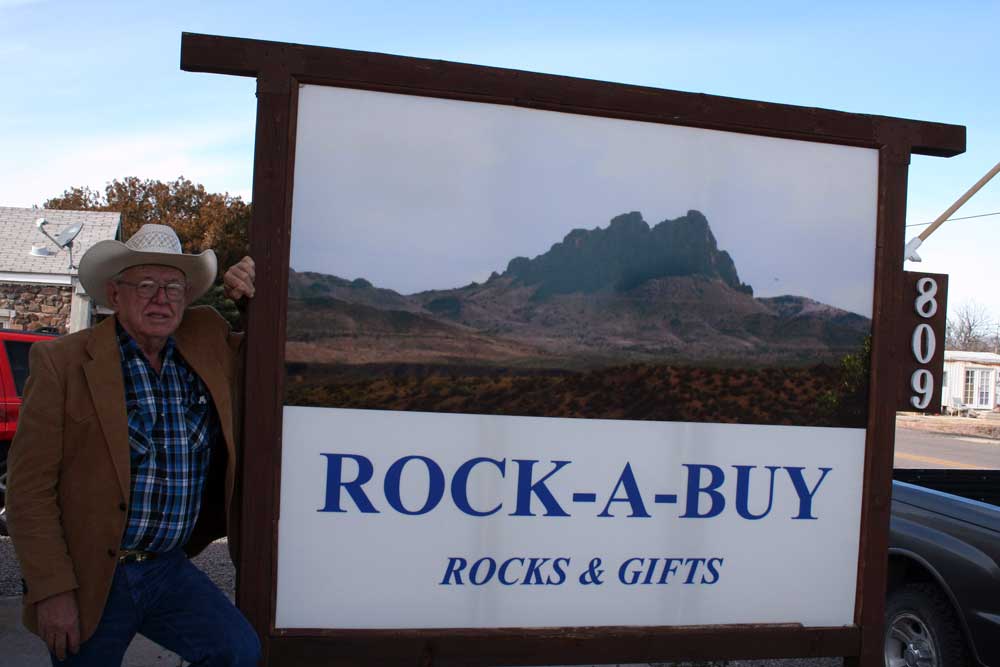 One of the shop’s features that has caught many an eye, besides the large assortment of rocks, is that the interior is well lit. Barlow said he had seen many rock shops that were dark, to the point of appearing gloomy. “It got to the point with some of them I felt like I was in a cavern,” he said.

A particularly interesting aspect of the Rock-A-Buy is it is the only rock shop in Greenlee County, which has a long, rich history of mining. In fact, it is the only full-blown rock shop in southeastern Arizona, though some businesses here and there do carry a few pretty rocks. It is also the only rock shop of its kind to exist for decades, if not longer, in this mineral-rich county. Even Greenlee natives in their 80s do not recall there ever having been a rock shop in any of the county’s three major communities – Duncan, Clifton and Morenci. Duncan is the smallest of the three with a population of about 700.

Barlow established the shop in 2014 in a building that used to be a garage. One of his first goals was to make the shop bright and still be eye-pleasing although its walls and ceiling are white. He initially installed fluorescent lighting in the ceiling panels but did not care for the effect it provided so he switched to LED lighting. He said it has made a definite difference in the shop’s overall appearance and enhances the illumination of light that is cast on the rocks. The lights are bright but are they are mellow and not blinding.

Anyone with even the slightest interest or curiosity about rocks may easily spend an hour looking at what the shop carries. That goes for the larger and smaller rocks. 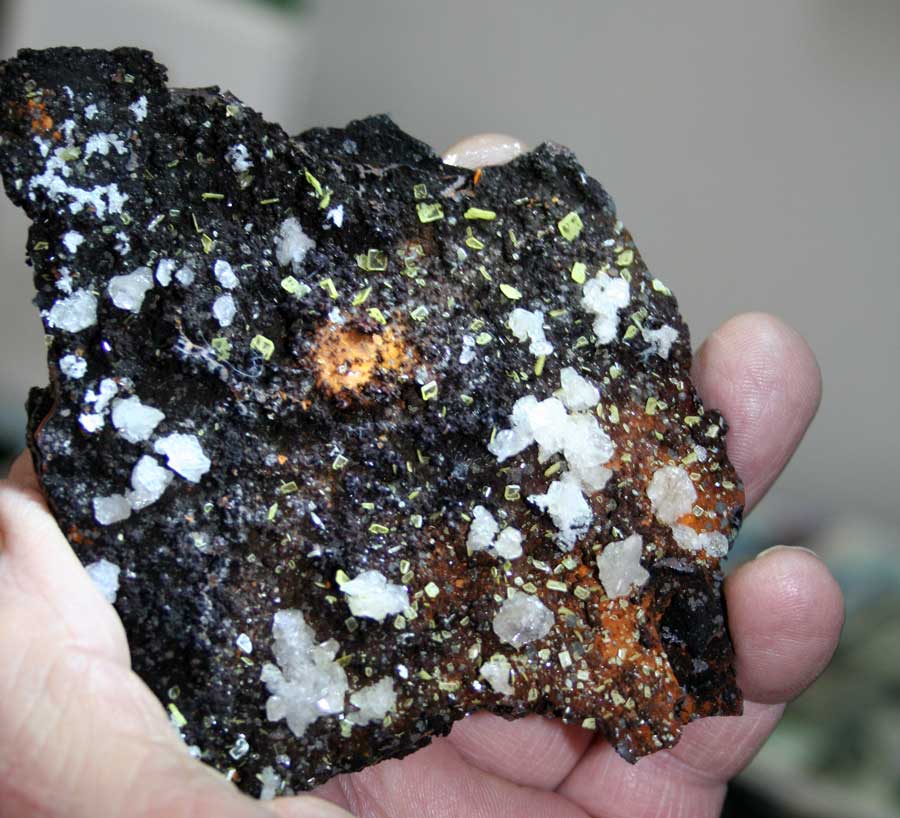 Photo By Walter Mares: The contrast of this black rock stands out more so in Doug Barlow’s hand. Barlow said the rock is a “mystery” and is not sure of what it consists.

Barlow told of an incident that occurred fairly recently that at first caused him to raise an eyebrow but resulted in what he considers a great compliment. He was in the shop’s back room when he heard some people enter. It was a man and a woman whom Barlow said “looked pretty rough”, and he hoped there was not any trouble in store.

It turned out the couple believed in the healing power of some rocks. He said they were very friendly and the man said the place was not a rock shop. “He called it a ‘gallery.’ I thought that was pretty neat of him to say,” Barlow said.

A stunningly attractive item in the shop is a large whitish crystal of selenite that looks somewhat like quartz. Barlow did not say anything about it other than it is unusual, very pretty and it came from a mine in Utah. Various Internet websites tell of how there are many people who believe selenite has healing powers.

Along with the selenite, there are highly attractive rocks, such as banded agate and several other types of agate, such as fire agate, which can be found locally.  The shop has Arizona petrified wood, including some found in Greenlee. There is a beautiful large green specimen of malachite. There is azurite and the gem stone chrysocolla, which is blue-green and is often mistaken for turquoise. 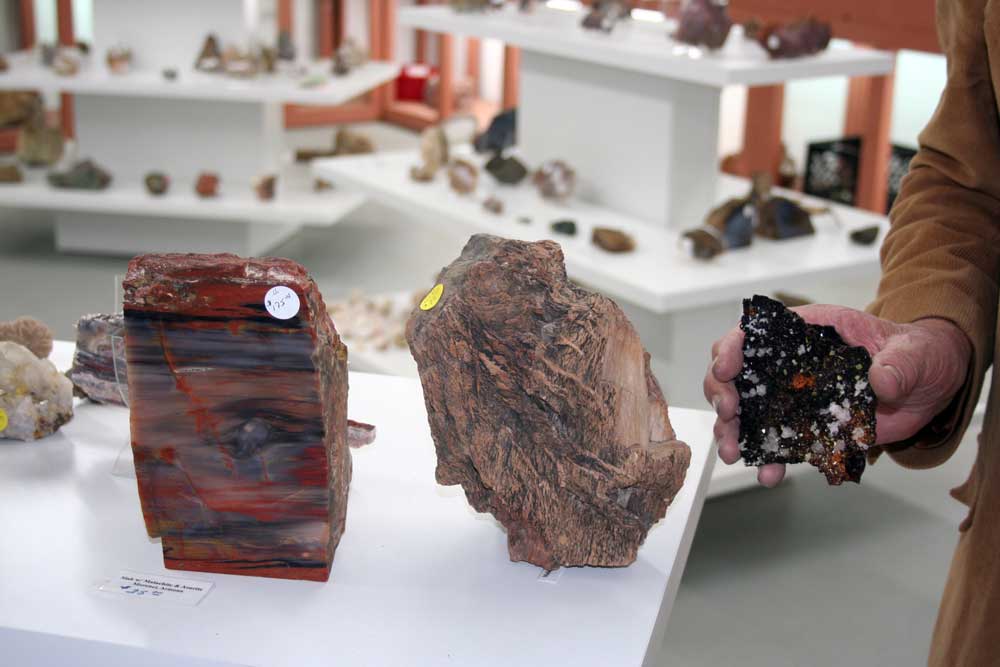 Photo By Walter Mares: A large piece of Arizona petrified wood, at left, along with another piece piece of Arizona petrified wood that comes from Greenlee County, and a mysterious black rock are displayed in a hand of Doug Barlow, owner of the Rock-A Buy rock shop in Duncan. Interestingly, Rock-A-Buy is the only rock shop in Greenlee County, which has a long and rich mining history. In fact, it is the only rock shop to exist in Greenlee in anybody’s memory, including local natives who are in their 70s and 80s.

Barlow also carries peridot, which is correctly pronounced (pair-a-doe). It is a French word. Regionally, it is pronounced as (pair-a dot), which is how the name of a community on the San Carlos Apache reservation is pronounced. 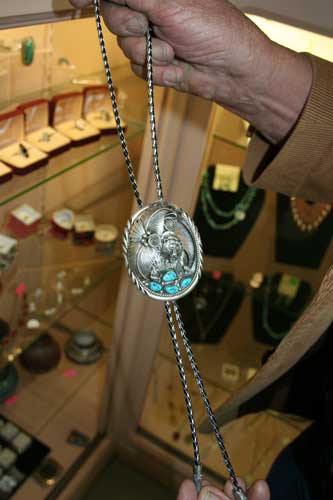 Photo By Walter Mares: This handsome pure silver bola tie made in the 1950s is among the top-notch Native American jewelry available at Doug Barlow’s Rock-A-Buy rock shop in Duncan. The bola carries the figure of a bear and took a great deal of silver to create.

Additionally, the shop has various cut and polished smaller pieces of rocks that are ideal for setting in a bola tie or larger pieces of jewelry such as bracelets.

The Rock-A-Buy also has a gift shop nook, which has delicate jewelry that includes necklaces and rings. Barlow said the jewelry is handmade by Zuni, Navajo and Apache artisans. “They are the real thing,” he said. “They are definitely made by Native Americans.” One of the standout pieces is a large bola tie created in the 1950s. It depicts a bear on it. “A lot of silver and meticulous work went into making it”, Barlow said as he proudly showed it to a visitor.

The nook has locally handcrafted goods such as knitted scarves, hats and blankets,  fragrant soaps and candles.

Barlow said one particular aspect of the shop that he enjoys is meeting people who are passing through town and stop at the shop. He said about 80 percent of his business comes “off the highway- folks just passing through” on U.S. 70.

Some travel specifically to Duncan to see his shop. He said he has people come by who are involved with the internationally renowned Gem & Mineral Show held annually in Tucson in late January and early February. “It’s come to be that many of those folks know who I am and come to Duncan specifically to visit and check out what I have.”

He said part of the reason in establishing the rock shop was to help his nephew, who plans to retire to Duncan in a couple of years and told of how he would like to start up a rock shop. Barlow said he will sorely miss the setting where he sees and speak with out-of-towners. The same goes for the many locals who stop by to shoot the breeze.

Duncan businesswoman Deborah Mendolsohn, who owns and operates the Simpson Hotel, commented, “It’s as much a community center as it is a shop. Doug is very entertaining and people enjoy being around him. Doug and the rock shop are what the best of a small community are all about.”

Among Barlow’s traits Mendolsohn said she has observed is his kind-heartedness and his generosity. “He doesn’t hesitate to give a kid a memento, like a little rock that’s pretty,” she said. “He’s bringing people to this town. I think of his place as a museum as much as a rock shop.”

She just may be right, considering that rocks are far older than anything ever created or built by mankind. For more information contact Barlow at 928-215-1641. 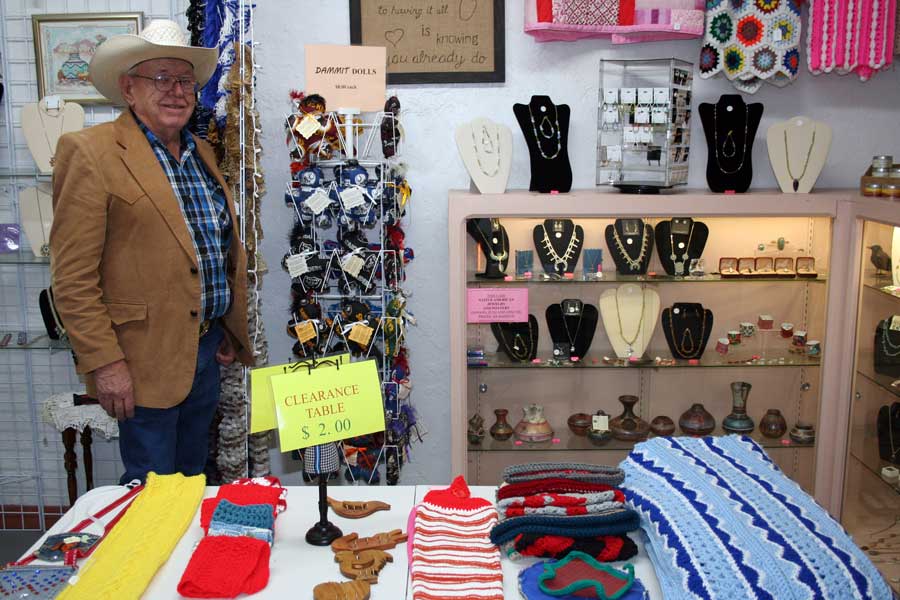 Photo By Walter Mares: Doug Barlow displays a crafts and gifts nook in his Rock-A-Buy rock shop in Duncan. The necklaces were made by Native Americans from the Navajo, Apache and Zuni tribes. The crafts in the foreground and at right include locally made fragrant soaps and candles