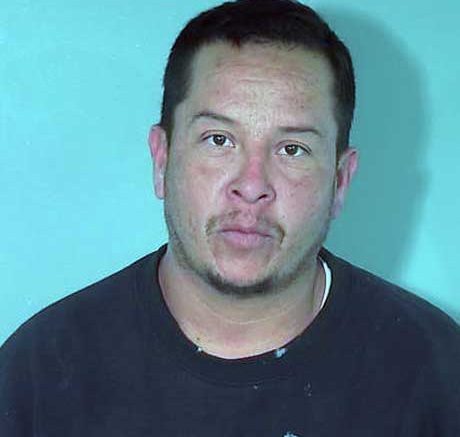 Contributed Photo/Courtesy GCSO: Eloy Otero was booked into jail on four warrants after being pulled over for a traffic violation. He was later charged with possession of marijuana and possession of drug paraphernalia.

SAFFORD – Those who regularly consume alcohol and/or other drugs may have a high-tolerance to their effects and not show outward signs of impairment, but they still don’t make the best transport drivers.

On March 3, Eloy Raymond Otero’s past caught up with him when he was pulled over for a minor traffic infraction.

A Safford officer was eastbound on U.S. Highway 70 at about 10 p.m. when he noticed a red truck enter the highway from 11th Avenue and fail to take the nearest available lane.

Upon initiating a traffic stop, the officer came upon Otero, 38, of Central, at the helm with three 14-year-old passengers. According to a Safford Police report, the car smelled of alcohol and marijuana, and the officer asked Otero to step outside for a field sobriety test after Otero allegedly admitted to drinking four beers.

Otero didn’t show any signs of impairment, but County Dispatch alerted the officer that the driver had four outstanding warrants for past driving infractions, including failing to pay fines for driving on a suspended license and speeding, and that his driver’s license was currently suspended.

After being placed under arrest, Otero allegedly admitted to having the end remains of multiple marijuana joints in the car in the center console. The officer found the remains, as well as a pipe with apparent marijuana residue and a small, usable amount of weed. When asked if he had a medical marijuana card, Otero said his card had lapsed.

An officer waited at the scene for a family member to pick up the youths and vehicle as another officer transported Otero to the Graham County Jail, where he was booked in on his warrants. He was later charged in Safford Municipal Court for possession of marijuana and possession of drug paraphernalia.