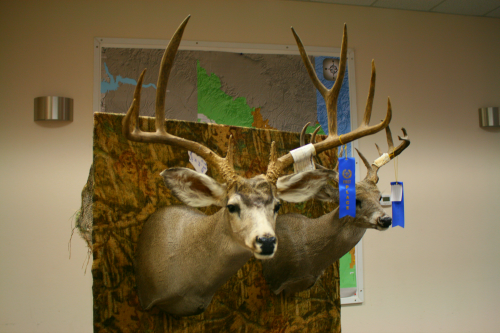 SAFFORD – When there’s a bite in the air and the seasons start to change, hunters begin to feel the call of the wild.

The 10th annual Youth Deer Hunting Seminar was held at the Graham County General Services Building on Monday. Hot dogs, hamburgers and barbecue were served to attendees, who packed the building into a standing room only event.

Wade Sanders of the Southeastern Arizona Sportsman Club (SEAZSC) and two other wildlife managers presented lectures on deer habitats and biology. Door prizes, including a new .243 caliber deer hunting rifle and a vortex ranger, were given to youth winners.

After everyone enjoyed their barbecue supper, the crowd quieted down for the presentation. Sanders opened the seminar by pointing out last year’s winners of the Big Buck contest in the youth division. He explained the prizes were awarded on the amount of buck points and the weight of the animal. Afterward, he went on to describe where to shoot deer and the basic senses of a dear.

“What do they see? They can see green and blue better than orange,” Sanders said. “Camouflage works because it breaks up the pattern.”

Sanders also conveyed some bad news to the individuals who invest in truck whistles to ward off deer from the road.

“That deer whistle that we can’t hear, they can’t hear either,” he said. Sanders explained that deer can hear roughly as well as a human can, but since they depend on their hearing for survival, they are more attuned.

Later on in the lecture, Sanders discussed the size and habit locations of various types of deer. He also discussed the impact of the seasons and location on a deer’s weight.

Throughout the evening, members of the SEAZSC busied themselves by enlisting new members into the club and renewing current memberships. 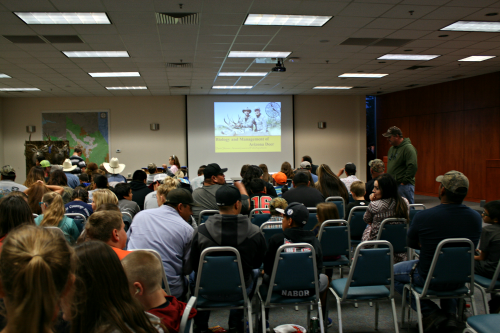 Brooke Curley Photo/Gila Valley Central: Attendance was at an all time high at the youth deer hunting seminar, according to many long-term SEAZSC members.