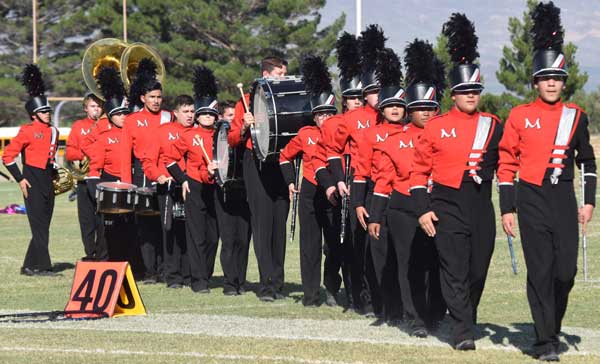 Photo By Raymundo Frasquillo: The 35-member Morenci Pride Band exits the field after its performance during Eastern Arizona College’s 51st Band Day on Saturday. The group earned a Superior rating.

The goal for 17 marching bands on a warm Fall day in Thatcher was to be perfect during their performances.

Morenci’s Pride Band left John T. Mickelson Stadium with a Superior rating following the conclusion of Eastern Arizona College’s 51st Band Day on Oct. 22.  It was the third consecutive superior earned by the band at the event under the direction of Jared Collins but the first in the Class 3A/4A division. The Wildcats were also recognized for Outstanding Marching during the presentation of awards. 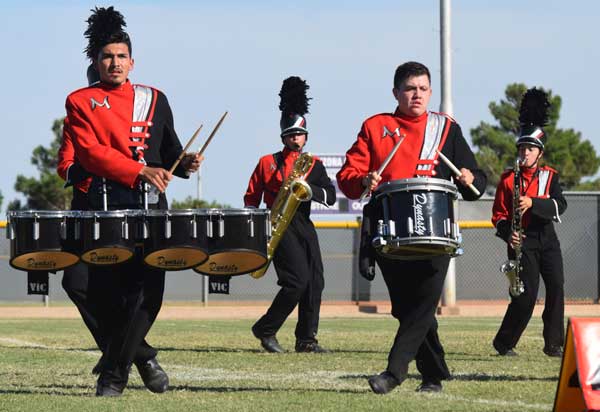 The 2015 Wildcats also left EAC with Outstanding Music, Percussion, and Drum Major plaques while the 2014 group also had the Auxiliary award. Collins’ first two bands, the 2013 and 2012 were both rated excellent. The 2013 version was invited to and participated in halftime activities of the Holiday Bowl in San Diego. Morenci ended as 2A state champions in 2011.

It is not the culmination of hours of hard work, dedication, sacrifice, and attention to detail by the 30 musicians and five-member color guard.

Perfection is not far away, only polishing on the critiques given by judges remains. 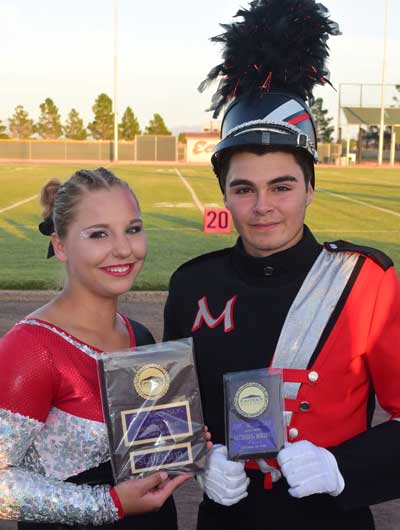 The next step is the state-qualifying competition at Tucson Ironwood Ridge High School on Saturday, Oct. 29, which could propel the band toward the ultimate goal as state champions following its Nov. 5 performance at Tempe McClintock High School.

What began as a week of physical conditioning for endurance followed by marching and music fundamentals during the summer is about to end.

Eleven seniors, seven juniors, 11 sophomores and five freshmen performed the Pride Band’s ‘Into the Cosmos’ program. The instrumentation was nine woodwinds including an alto saxophone, a base saxophone, a base clarinet, two clarinets and four flutes; nine brass, including four trumpets, two French horns, a baritone and two Sousaphones; 10 percussion players and a base guitar.

Collins was a 2016 Arizona Rural Schools Greenlee County Teacher of the Year nominee. Juana Verlander directs the color guard for an 11th year, and Placencio is the drum major. 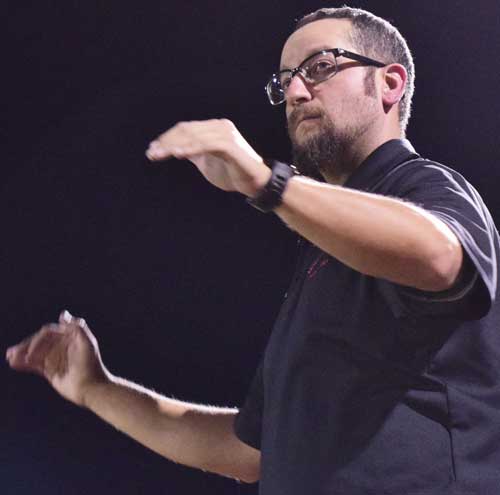 Photo By Raymundo Frasquillo: Morenci Pride Band director Jared Collins conducts the National Anthem during pre-game for home football contests in Lawson Stadium. Collins was recently feted during a banquet hosted by the Arizona Rural Schools Association at Little America in Flagstaff. During the gathering, the area resident was in the running for the 2016 Greenlee County Teacher of the Year award. He returned as a nominee along with a plaque.

The open class bands were from New Mexico schools Chaparral and Silver along with Texas El Paso Burgess. Each of the out-of-state bands rated Superior, with Chaparral having Outstanding Drum Major, Burgess Outstanding Percussion and Silver Outstanding Music, Marching and Auxiliary.