PIMA – Don’t let the sticker shock scare you. The town of Pima is looking to increase its expenditure limitation by slightly more than $5 million with Proposition 401, but it won’t increase property or any other kind of taxes in the town.

An expenditure limitation is simply how much a municipality can spend on its expenditures, including employee salaries, amenities and other town services. Municipalities are either allotted a state-issued expenditure limitation or, if approved by voters, it can raise its limitation on its own through permanent base adjustments or through what is called a Home Rule limitation. The limitation doesn’t mean the town will spend up to that amount – it currently doesn’t have the resources to do so – but that if the revenue was there it could.

Pima has been on a Home Rule limitation since fiscal year 2009/10. The Home Rule limitation was extended in 2012 after voters approved it in the primary election. A Home Rule limitation is only good for up to four years. That means if Pima does not vote in favor of the permanent base increase proposition, it will automatically revert to the state-mandated limitation of roughly $1.4 million, which is based on its population. That scenario would cause the town to cut nearly $1 million from its current budget, according to a publicity pamphlet released by the town.

The proposed ballot measure is a permanent base adjustment that wouldn’t have to be voted on in another four years. That is why the amount is so high, so the town will not be anywhere near spending over its limitation for many years to come, according to Pima Town Mayor Tom Claridge, who wrote a statement of support for the proposition.

“The town of Pima believes increasing the spending limitation to $6.5 million will allow room for the small, yearly increases in the spending ceiling for years into the future,” Claridge wrote. “Considering the limited amount of revenue the town receives each year, based mainly on its population, it would take a number of years for the ceiling to be reached.” 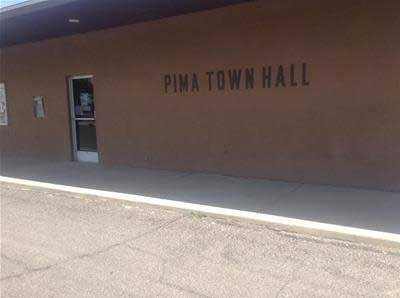 The Pima Town Council unanimously voted at its August meeting to pass the permanent base adjustment and with good reason. Pima has come precariously close to exceeding the previous state-mandated limitation several times and accidentally exceeded its fiscal year 2006/07 limitation of $959,138 by $127,670 when an employee sent in a check to pay for a chip-sealing project too early. The project was slated to be paid on the fiscal year 2007/08 limitation.

Even though it was a simple clerical gaffe, the state imposed a $93,905 fine to the town for exceeding the limitation. Pima began paying the fine in yearly installments of $18,781 and had paid $37,562 before Governor Jan Brewer signed HB 1087 in 2011, which forgave the rest of the fine.

To prevent such an incident from occurring again, Pima voted in a one-year expenditure increase in 2008 that raised the limitation from roughly $1.1 million to slightly more than $2.2 million.

According to the town’s budgetary numbers released in a publicity pamphlet, the town’s current budget is about $2.4 million, which is roughly $1.6 million under its current Home Rule limitation. 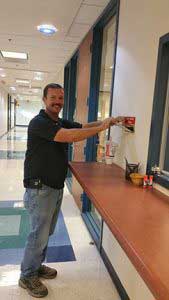 Contributed Photo: McCoy Hawkins, Graham County Deputy Information Technology Director of Operations, was first to cast his early vote for the General Election. Early voting is underway and will continue through Friday, Nov. 4.

Voters can also vote early through Nov. 4 at the Recorder’s Office in the Graham County General Services Building at 921 W. Thatcher Blvd. in Safford.