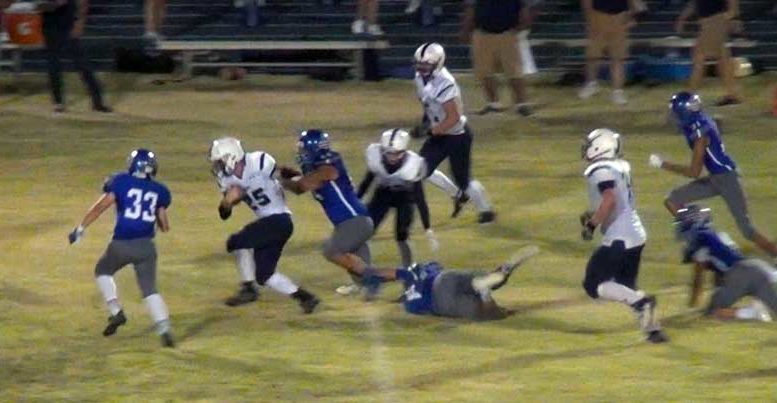 SAFFORD –  The Safford Bulldogs (2-1 conference, 2-2 overall) tried to bounce back from its 1-point loss last week and stand tall but instead they were trampled by the crusading Lions of Pusch Ridge Christian Academy (2-0 conference, 3-0 overall), 51-6.

The Lions garnered more than 600 yards rushing on a night that saw Pusch Ridge score touchdowns on its last six consecutive possessions, not counting when it took a knee in victory formation.

“They were the better team, flat out, in all three phases,” Safford head coach Michael Alba said.

Pusch Ridge controlled both the offensive and defensive line of scrimmage throughout the night, and Safford had trouble revving up its usual high-octane offense. The Bulldogs punted six times on the night and had four turnovers, including two lost fumbles, an interception, and a loss on downs, compared to just a lone touchdown. 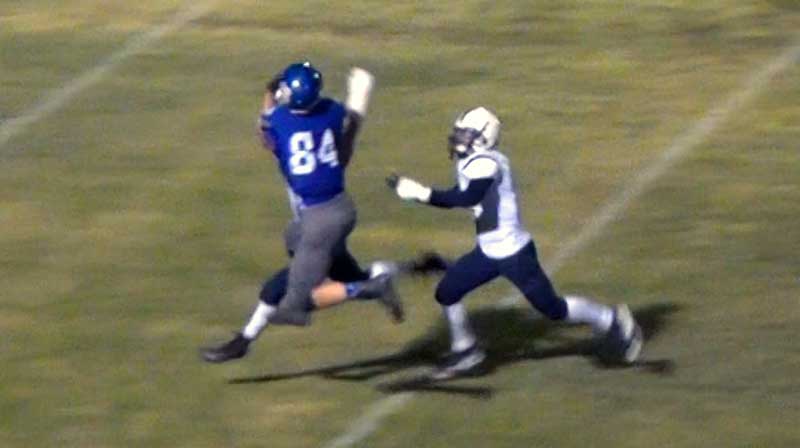 Jon Johnson Photo/Gila Valley Central: One bright spot for the Bulldogs was the play of Cameron Abril, who had three catches for 76 yards.

Conversely, Pusch Ridge had little trouble moving the ball and only punted twice all night, compared to seven touchdowns, a field goal, and no turnovers.

“Our offensive line did an awesome job tonight,” Pusch Ridge Christian Academy head coach Jerry Harris said. “It opened up some holes and our backs hit them hard.”

After running the ball to midfield in a succession of plays, Pusch Ridge quarterback Christian Fetsis hit Turner Harris on a 48-yard TD pass to open up the scoring on the Lions’ first possession. The Bulldogs held their own early, however, and the score was just 7-0 after the first quarter. 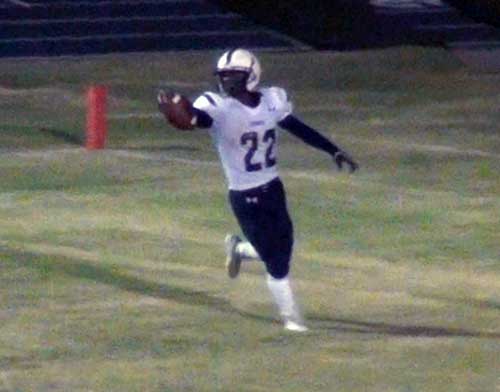 After Safford went three-and-out on its first two possessions, it forced Pusch Ridge into its only two punts on the night. On its third possession, however, Taylor Hornelaz bobbled a handoff and lost a fumble to the Lions on the Bulldogs’ 5-yard line.

The Bulldogs held their own, however, and pushed the Lions back until they were forced to kick a 35-yard field goal to go up 10-0.

For a while it looked like the teams might go into halftime with that score, but the Lions came on strong late in the second quarter. Gila Valley Central’s Player of the Game, Matthew Mcleod, scored on a 23-yard run, zigging and zagging through the defense. After a Safford fumble, Mcleod capitalized on the turnover on the very next play, taking a pass from Fetsis 73 yards down the left sideline to put the Lions up 24-0 going into halftime.

“We executed what we were supposed to do,” Mcleod said. “We did great today.” 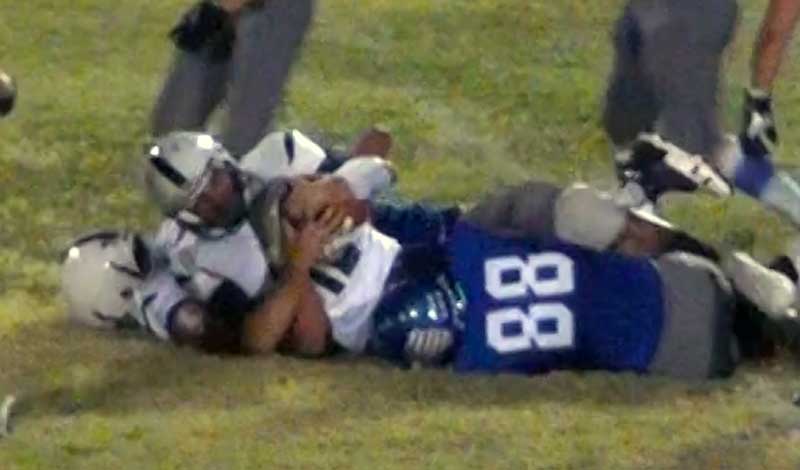 Mcleod also expressed his gratitude to the Bulldog players and acknowledged them.

One bright spot for the Bulldogs was the continued excellent play by Cameron Abril, who caught three balls for 76 yards and his booming punts continued to change field position all game and make the Lions earn their points by marching down the field, which, unfortunately for Bulldog fans, they did. 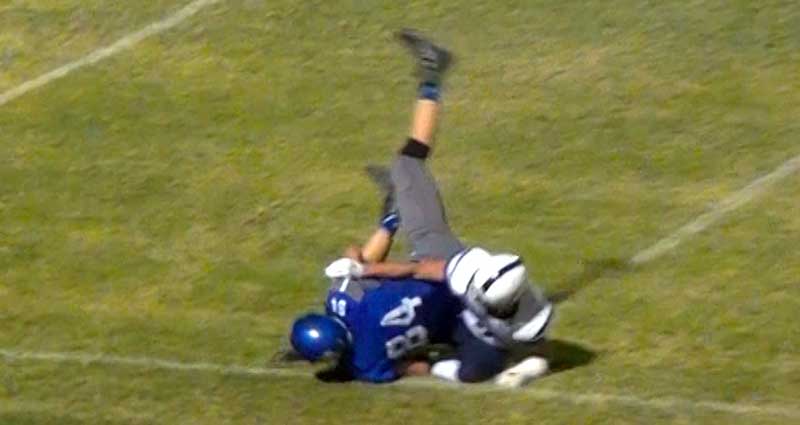 The Lions picked up where they left off in the second half, scoring at will on a 10-yard run by Fetsis and a 5-yard run by Mcleod, both in the third quarter.

Safford never quit, however, and quarterback Mason Duros put them in scoring position with a big 47-yard run down to the 14-yard line. Duros later scored on the drive on a 5-yard plunge to avoid the shutout.

Jon Johnson Photo/Gila Valley Central: Late in the game both of Safford’s starting quarterbacks were knocked out due to injury. They are both questionable for next week’s game.

The Lions came right back, however, and scored on a 6-yard run by Fetsis in the fourth quarter and with a final, back breaking 60-yard run by Dakota Haynes to finish off the Bulldogs, 51-6.

While the loss hurt, the loss of Safford’s two starting quarterbacks may continue to hurt into next week. Manuel Aparicio, who was hampered by a heel bruise during the week, had a subpar game for him and finished with just 18 yards on 10 carries. He left the game in the third quarter and did not return.

Jon Johnson Photo/Gila Valley Central: After the game the two teams came together at mid-field and shared a prayer.

In other Gila Valley prep action:

The Pima Roughriders (3-1 conference, 3-1 overall) stomped the Tombstone Yellow Jackets (0-3 conference, 0-3 overall), 60-7. Pima will next host the Bourgade Catholic Golden Eagles (2-1 conference, 2-1 overall) this Friday. See our game story for a full write up of the Pima/Tombstone game.