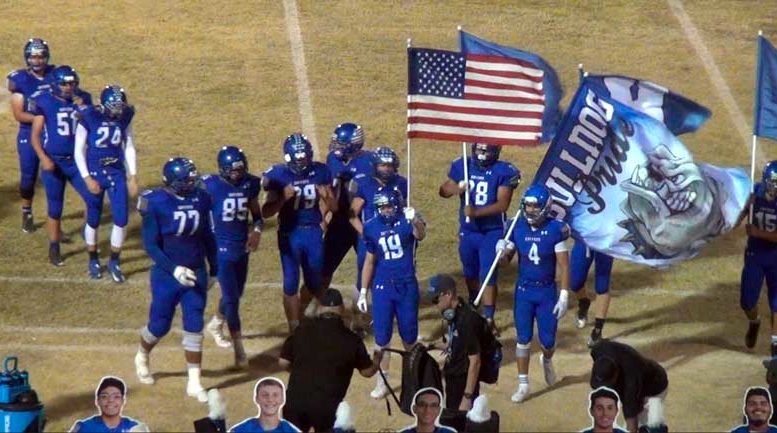 Jon Johnson Photo/Gila Valley Central: The Safford Bulldogs honored our nation's veterans before the game with the Coolidge Bears and gave the fans a treat with a 35-6 homecoming victory.

SAFFORD – After suffering through a four-game skid against some of the top teams in the state, the Safford Bulldogs (3-3 conference, 3-4 overall) broke their fall with a dominating victory over the Coolidge Bears (1-5 conference, 1-6 overall), 35-6 at Safford’s homecoming game Friday night. 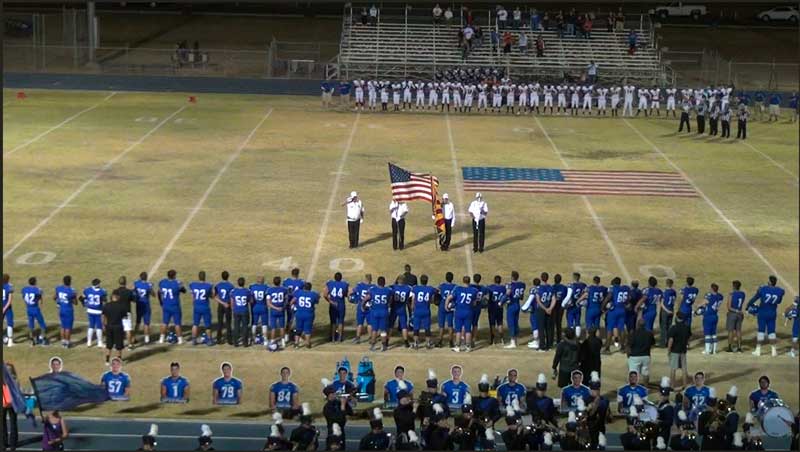 Jon Johnson Photo/Gila Valley Central: Players, coaches, and fans all stood for the playing of the National Anthem prior to the game.

The Safford faithful filled the stands to capacity as many were in town for class reunions and to root on the Bulldogs.

With 12 players sitting out due to injury, including quarterbacks Manny Aparicio, Mason Duros and wide receiver/kicker Cameron Abril, the next-man-up mantra was put to the test. 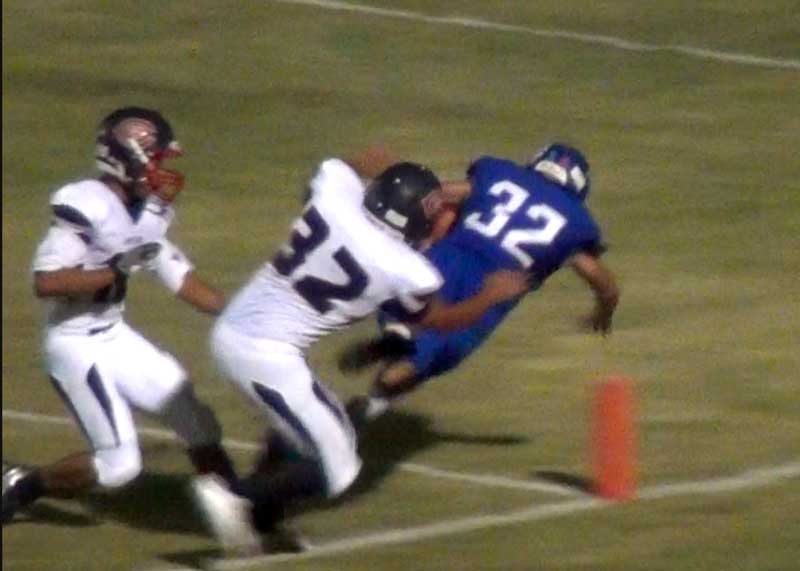 Jon Johnson Photo/Gila Valley Central: Keaton John dives for the end zone. While he stepped out of bounds on this attempt, John did score two touchdowns on the night.

Keaton John had one of his best games of the year and finished with a game-high 152 yards rushing on 17 carries with two touchdowns to average 8.9 yards per rush. The Bulldogs recorded a total of 327 team rushing yards on the night on 44 carries for a 7.4 average.

Payson Harsh stepped into the quarterback role for most of the game, and while he didn’t throw much, he eclipsed the century mark for rushing as well and finished with 106 yards on 8 carries for two touchdowns to average 13.3 yards per carry.

Josh Romero took over kicking duties and was perfect on the night, going 5-5 on extra-point attempts.

“We had quite a few (players who sat with) injuries tonight,” head coach Michael Alba said. “So, we just tried to get some other guys in and they stepped up and played well.” 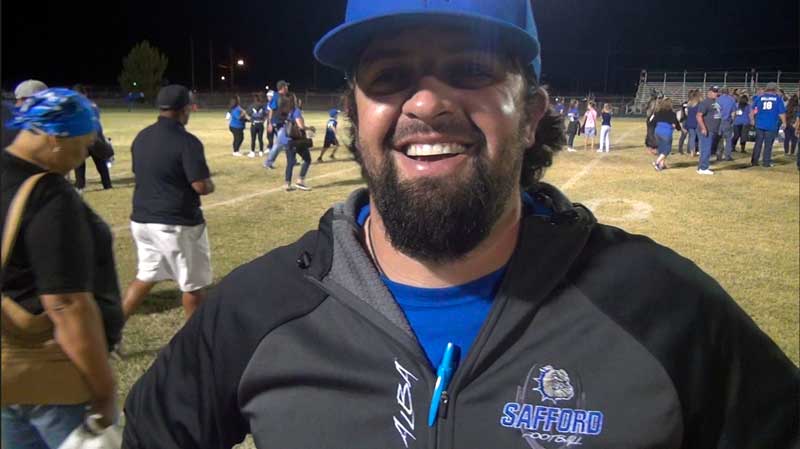 After punting on their initial possession, the Bulldogs’ defense stepped up and forced a fumble that was recovered by Bailey Sanford for the Bears’ first of four turnovers on the night. With 10 unassisted tackles, three assisted tackles, a quarterback sack, and a fumble recovery, Sanford was chosen as Gila Valley Central’s Player of the Game. 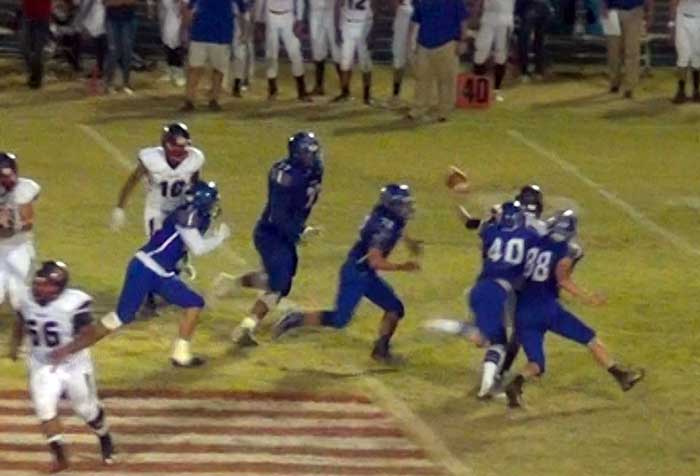 “I was just getting some luck on the “A” gaps,” Sanford said. “It (the win) feels great, refreshing. You know, four losses, that was rough. But I’m glad to get the “W” tonight for homecoming.”

The defense was big for Safford, especially in the first half as the Bulldogs held the Bears to roughly 40 yards of total offense. 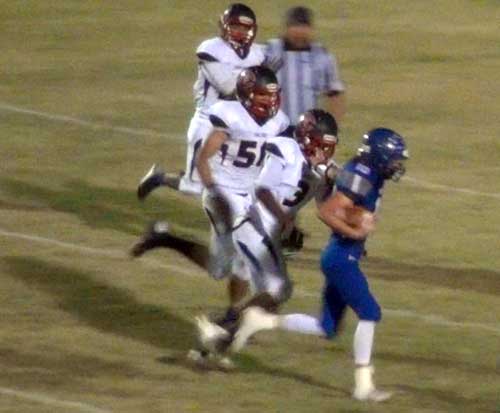 John then opened the night’s scoring with his first touchdown as he went 17 yards around the right side into the end zone. John then repeated himself in the second quarter and went 20 yards around the left side for the score to put Safford up 14-0.

The Bulldogs weren’t finished, however, as sophomore Dylan Dorrell scored from four yards out and, after another Bears turnover, Harsh scampered in from 15 yards out to put the Bulldogs up comfortably at the half, 28-0.

The Bears looked to make a game of it coming back from halftime and had more yardage on their single possession in the third quarter than they did for the entire first half.

Coolidge moved the ball effectively with both the run and pass during their eight-minute possession and capped off the drive with a 19-yard touchdown by Jared Hunt on a tipped snap on fourth and four. It would be the only points on the night for the Bears, however, as the omnipresent JoPaul Arbizo got his paw on the extra-point attempt for the block. 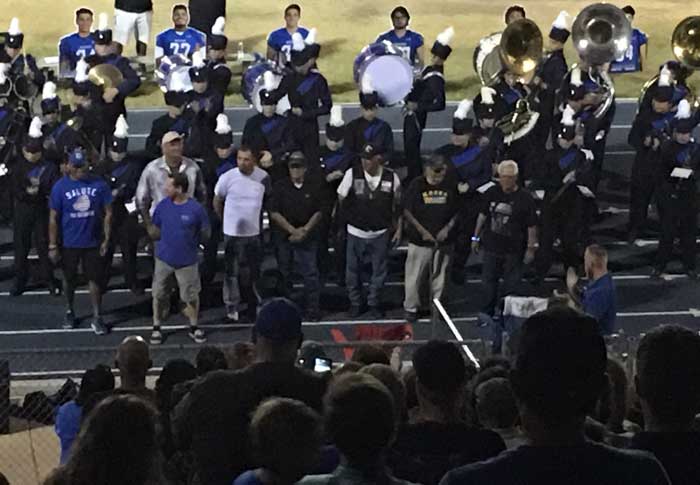 The Bulldogs then answered on the first play of the fourth quarter as Harsh ran around the right side for 15 yards and dove into the end zone, and Safford left the field with the victory, 35-6.

Safford will next travel to Queen Creek to face the Benjamin Franklin Chargers (5-1 conference, 6-1 overall) on Thursday, Oct. 5. The Chargers dispatched the San Tan Foothills Sabercats (4-1 conference, 4-2 overall) on Friday, 34-0, and previously beat Coolidge, 39-10. It should be a good test for the Bulldogs, who should compete well if healthy. 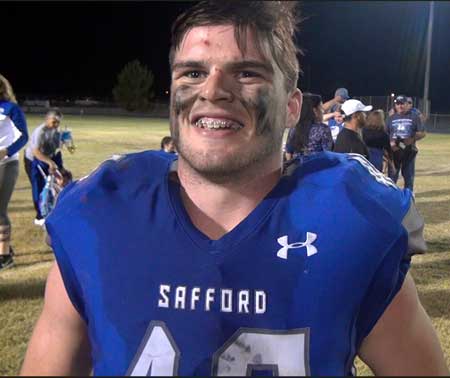 Jon Johnson Photo/Gila Valley Central: Bailey Sanford was chosen as the GVC Player of the Game for Safford.

The unbeaten Thatcher Eagles (5-0 conference, 7-0 overall) continue their quest to repeat as 2A State Champions by mowing down yet another 2A East Region team. The Eagles trounced the St. Johns Redskins (4-1 conference, 4-2 overall) 56-18 in a game that wasn’t even as close as the score reflects.

Thatcher had a huge offensive explosion in the first half and jumped out to a 50-6 halftime advantage.

The Redskins will have to quickly lick their wounds because they will make a return trip to the Gila Valley on Oct. 6 to face the Pima Roughriders (4-2 conference, 4-2 overall) who are looking to bounce back from their own loss to Thatcher.

The Eagles have a break to heal any nagging injuries with a bye next week before their much-anticipated home matchup against the currently unbeaten Round Valley Elks (3-0 conference, 6-0 overall) on Oct. 13. Both Thatcher and Round Valley have been equally dominant this season with the Elks winning all of their games by double digits. Thatcher has beaten all of its opponents by double digits as well except for its barn-burner victory over Safford on Sept. 1, 42-41.

Round Valley will first have to battle with Morenci (4-2 conference, 4-2 overall) on Oct. 6 before meeting Thatcher to see who will sit atop the perch in first place in the 2A East Region. Morenci dispatched San Carlos (2-4 conference, 2-4 overall) on Friday, 65-6.

The streak could end next week for Duncan as it plays the winless Baboquivari Warriors (0-6 conference, 0-6 overall) in the somebody-is-going-to-get-a-victory game.