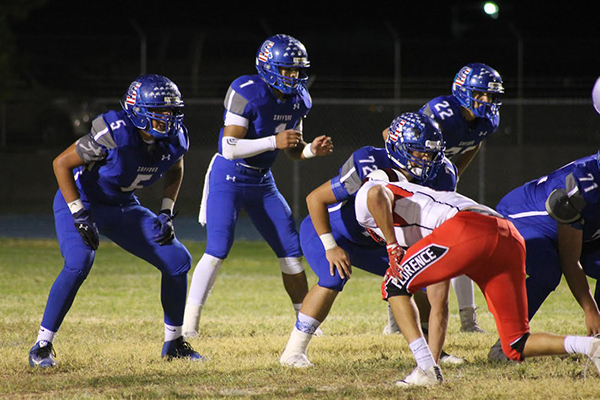 Contributed Photo/Courtesy L. Scott Bennett: The Safford Bulldogs couldn't keep up with the offense of the Florence Gophers and lost 58-28.

The Florence Gophers (6-0) put a damper on the homecoming festivities for the Safford Bulldogs (2-4) on Friday night as its high-octane offense ran away with a 58-28 victory.

The Gophers have averaged over 55 points per game this season, and despite high-intensity play on both sides of the ball by the Bulldogs, Safford could not match the Gophers’ go-fast and go-hard offense.

After winning the toss and electing to defer, the Bulldogs kicked off to Florence, which needed less than a minute to move down the field and take a 7-0 lead.  The Gophers would hit pay dirt two more times before Safford was able to get in to the scoring action. 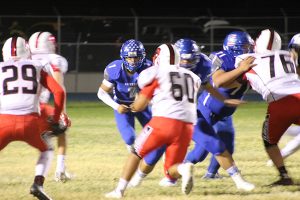 Down 21-0 and with time running out in the first half, Safford put together its first scoring drive.   After starting the at their own 22 and converting a fourth and 1 play to keep the drive alive, Safford junior quarterback Manuel Aparicio called his own number, and, after a play action, Aparicio rolled out for a 9-yard touchdown run.

It appeared that Safford would go in to the locker room at the half very much in the game, however Florence dashed those hopes as the second quarter came to an end.  After running an extremely efficient two-minute offense, the Gophers punched it in with only five seconds left in the half to take a 28-7 lead.

After giving up another TD to the Gophers early in the second half, the Bulldogs would find the end zone for the second time on the night with six minutes remaining in the third quarter.  After a 30-yard run from Riley DeSpain to get the Bulldogs close, Aparicio once again took it in for what would be the second of his three touchdowns on the night.  After the score and a successful PAT, Safford was down 42-14.

As the third quarter came to an end, Safford made a game of it.  Right after a missed onside kick attempt by the Bulldogs, Safford safety Payson Harsh jumped in front of a Gopher pass for the interception.  The play gave Safford the ball back with a short field, and the Bulldogs needed just 24 seconds to capitalize on the turnover and close the gap to 42-21 on a 10-yard run from DeSpain.

Despite excellent defensive play by Safford, which included a sack by JoPaul Arbizo and a blocked PAT by Ralph Frias, the Gophers would add two more TD’s and a field goal, sealing the Bulldogs’ fate.

With less than two minutes left in the game, and down by 37, Safford continued to fight.  The offense, which had maintained its intensity for the entire game, ran a two-minute offense which would get them in to the end zone one more time.  After Aparicio hit Cameron Abril for a 44-yard pass to get the Bulldogs back in to the red zone, Aparicio once again took it in himself for the score.  With 16 seconds left in the game the Bulldogs scored one last time to make the final 58-28.

“I am proud of the way our kids never gave up and fought to the end,” he said.

Safford Head Coach Michael Alba echoed Peterson’s thoughts on the game.  Alba expressed how proud he was of the way his team fought and did not give up.  He went on to praise the Gophers and said they “are a very good team.”  Alba also commented on his defense.

“We missed some one on-one matchups, but our defense had that same intensity that our offense had most of the game,” Alba said.

Florence will look to remain undefeated when they travel to take on Queen Creek’s American Leadership Academy (5-1). Safford will attempt to get back on track and keep their playoff hopes alive as they travel to face the Coolidge Bears (1-5).