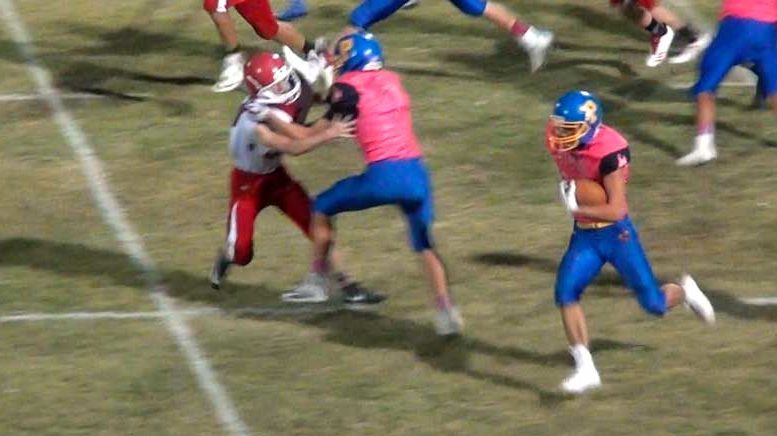 PIMA – It might have been a pink-out at Edd Hubbard Field but the Pima Roughriders (4-3 conference, 4-3 overall) left with a black eye after falling to the visiting St. Johns Redskins (5-1 conference, 5-2 overall), 20-14. 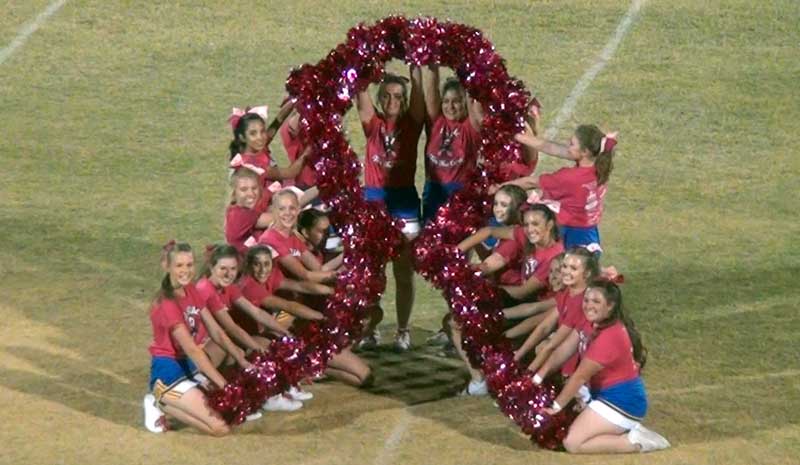 After getting walloped by Thatcher the previous week (as most teams have this year) St. Johns head coach Mike Morgan said he whipped his players into shape with three-hour long practices with the intention of heading back to the Gila Valley and showing they had more to offer.

“We said that we were going to try to redeem ourselves by going back to the Gila Valley and play some decent football,” Morgan said. “We knew they’re good. They kicked our butt last year, 44-14.” 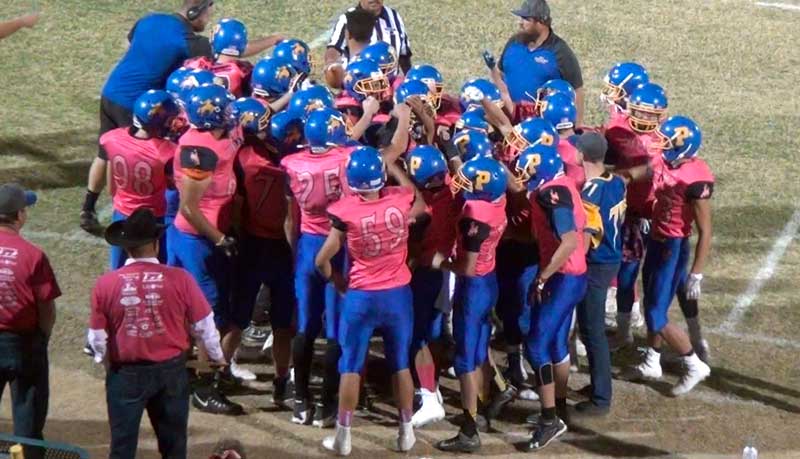 Pima moved the ball well Friday night, but the Roughriders had trouble finishing their drives all night and it cost them the victory. 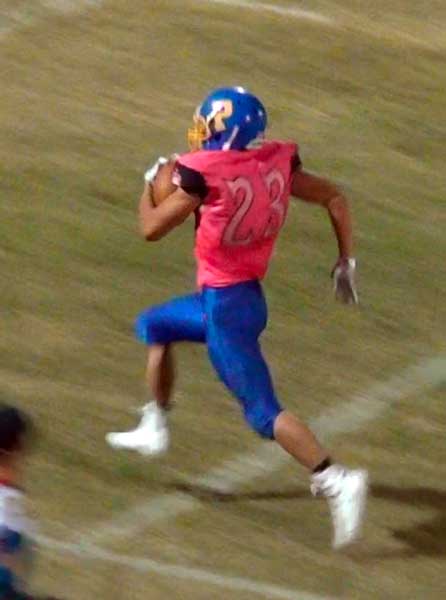 Pima finished the game with five turnovers compared to just three for St. Johns, but it wasn’t the times it gave up the ball but rather when they weren’t able to take it that cost them the game, according to Pima head coach Jace Hancock.

“Defensively we should have had three easy interceptions and we didn’t get those easy balls,” Hancock said. “Offensively, we just never got it going.”

After a flurry of a first quarter where both teams lost fumbles on their opening drives and St. Johns tried to air it out with Pima, things settled down in the second quarter as the Redskins ramped up their run game.

Led by their crafty tailback Joseph Ramsey, the Redskins garnered 5- to 7-yards per carry as they marched down the field. Ramsey attributed their success to the men in the trenches.

“It was) great blocking by our line and our lead blockers,” he said. “Last week was rough, but we’re going to get back on top. (We’re) going back to quality football like we used to play.”

Ramsey opened the scoring with a 15-yard sweep around the left end to the corner to give St. Johns a 6-0 lead.

Following a re-kick after initially knocking the kickoff out of bounds, Aaron Judd fielded the second offering and took it back 83 yards for the TD. He then followed that up by scoring the 2-point conversion to put Pima up 8-6. 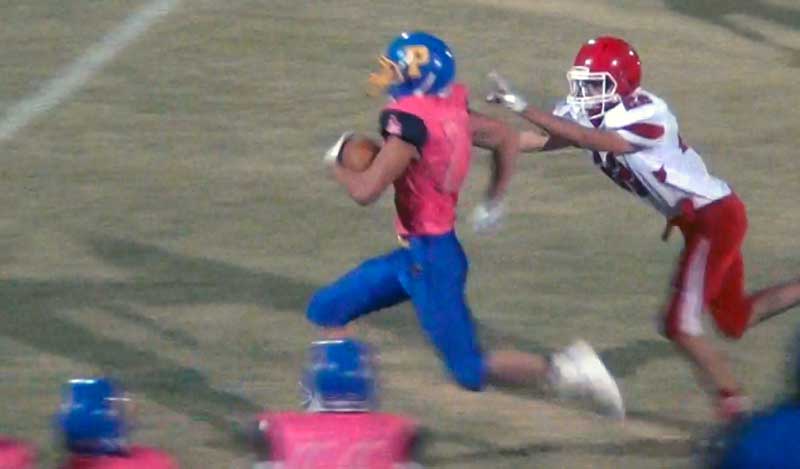 Jon Johnson Photo/Gila Valley Central: Aaron Judd just evades the grasp of a would-be tackler on his way to the end zone.

The Roughrider defense then showed its mettle. After forcing St. Johns into a long third down, Brayden Brown intercepted Redskins quarterback Ramon Sanchez’s pass and took it back 34 yards, and the Roughriders went into halftime clinging to its 8-6 lead.

Early in the third quarter, Kyren Ulibarri stepped in front of a Joshua Whitaker offering and returned the interception to the house for a pick-6. Fortunately for Pima, St. Johns was flagged for an illegal block during the runback, so the touchdown was removed.

The Redskins again owned the time of possession in the third like they had done in the second, however, and methodically marched downfield until finally scoring on a 1-yard plunge by fullback T.J. Heap. This time Ramsey took in the pitch on the 2-point conversion and St. Johns regained the lead, 14-8.

“I think the key was ball control,” Morgan said. “It kept the ball away from their quarterback, which is really good, and their receivers. I think clock control and the way these guys ran was the key to victory.”

Pima valiantly fought back and appeared to be poised to regain the lead early in the fourth quarter but their drive stalled in the red zone at the 10-yard line with an incomplete pass.

A huge momentum shift then occurred on the very next play as Redskins’ running back Jarred Fielder burst through the middle of the line untouched and raced all the way to a 90-yard touchdown, giving the Redskins a 20-8 lead. 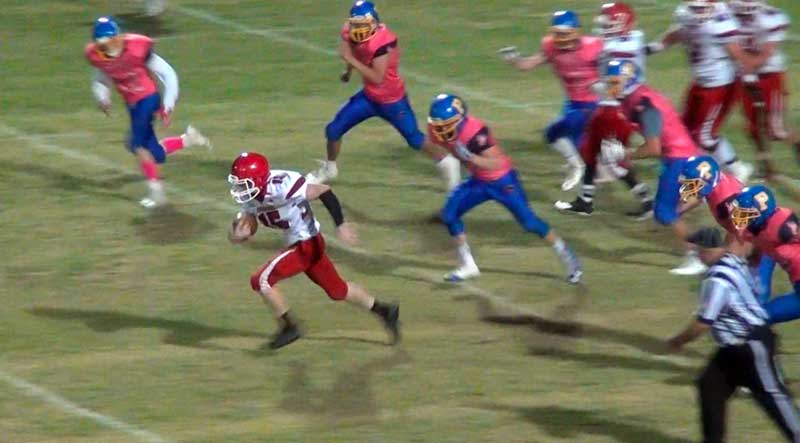 Jon Johnson Photo/Gila Valley Central: Jarred Fielder bursts away from the pack on his way to a 90-yard TD.

“It felt amazing,” Fielder said. “Our line did their job and gave me that hole so I could do it. It was practice that made us do this good, and we’re going to keep it up.”

Undaunted, Pima’s big air attack came right back and Whitaker hit Trey Thompson on a 55-yard TD to bring the game within reach at 20-14.

Pima then had a sneaky call set up for the onside kick and St. Johns appeared to not notice one of the players that pretended to head to the sidelines actually was still in the field of play. The onside kick was hit too far inside and not down the sideline where the lone Pima player was, however, and St. Johns managed to run out the clock on the game and perhaps on Pima’s playoff hopes.

“It’s just one of those games,” Hancock said. “You sort of cry a little bit and then you regroup and you move on. That’s about all we can do.”

Pima will look to rebound on the road at San Carlos (2-5, conference, 2-5 overall) this Friday. 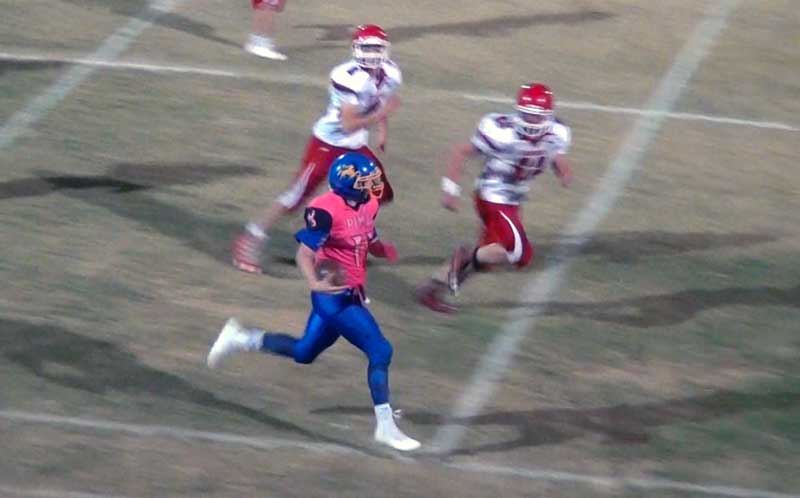 Safford will look to lick their wounds at Globe (1-4 conference, 2-5 overall) on Friday.

Morenci (4-3 conference, 4-3 overall) visited Round Valley (4-0 conference, 7-0 overall) and probably wished they hadn’t as they got spanked 44-0. The Wildcats look to rebound at creampuff Tombstone (0-7 conference, 0-7 overall) on Friday.

Thatcher (5-0 conference, 7-0 overall) had a bye at the right time and got to rest and study up for its game-of-the-season in the 2A East Region this Friday against equally unbeaten Round Valley to see who indeed is the top seed in the region. The game will take place at John T. Mickelson Stadium in Thatcher and it is likely one not to be missed.