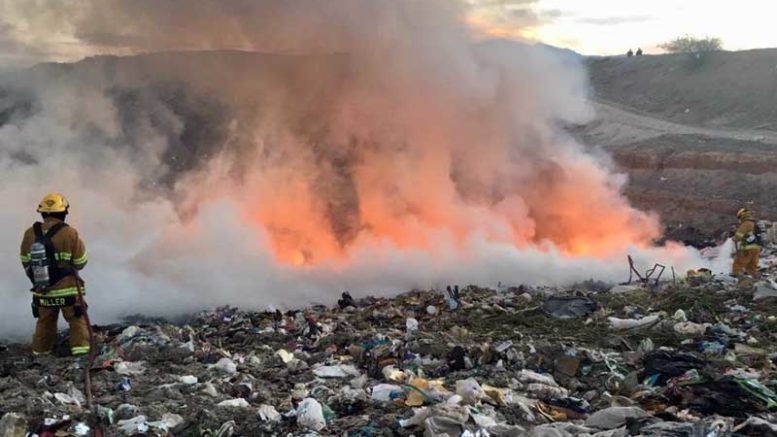 Contributed Photo/Courtesy SFD: The Safford Fire Department responded to a fire at the Safford Landfill on Wednesday.

SAFFORD – This isn’t Springfield, and I suppose we’re lucky it’s not tires that are on fire. 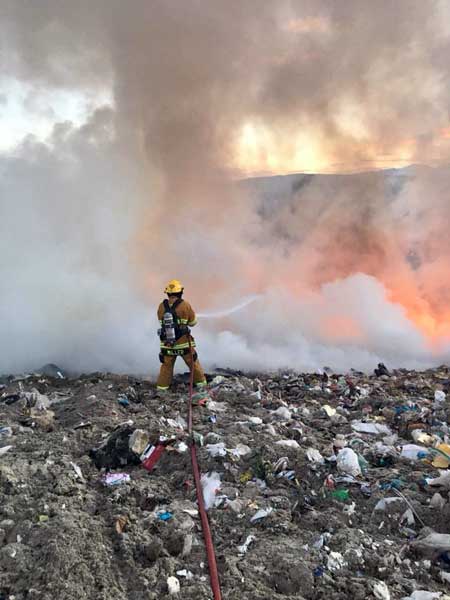 Contributed Photo/Courtesy SFD: A firefighter sprays down a blaze at the landfill.

The Safford Regional Landfill caught fire for the second time in a week Thursday, prompting firefighters to have to traverse the trash to extinguish the blaze.

Safford Firefighters were dispatched to the site at around 5:30 p.m., according to Safford Fire Chief Clark Bingham. The firefighters doused the trash with water and a little soap and then landfill workers removed the smoldering debris from the rest of the trash to continue to wet it and make sure it was completely extinguished before putting it back into the landfill.

Bingham said a landfill fire can be extremely hazardous to those battling it and extra precautions were taken to ensure no injuries occurred. On top of chemical toxins in the smoke, there is the ever-present danger of a puncture injury while wading through the community’s trash.

“It’s really nasty,” Bingham said. “You don’t want to be waddling around in your own garbage let alone everybody else’s in the Valley . . . You don’t know what people put in there. Exposing ourselves is what we’re really concerned about.” 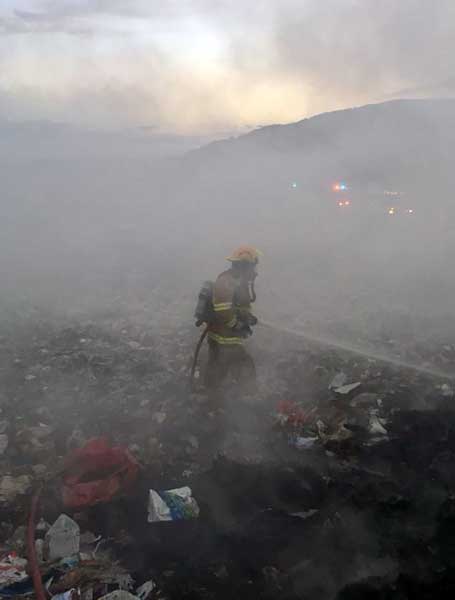 Contributed Photo/Courtesy SFD: A firefighter walks through the contaminated smoke.

Due to the dangers associated with a landfill fire, everyone working it was properly equipped with all their safety gear, including a breathing apparatus for each firefighter.

Unlike a cotton module fire that is generally started by the friction of a rolling stone during the gathering process that smolders and starts the module on fire, Bingham said the landfill fires are likely the culprit of someone disposing of something in the trash that they shouldn’t.

“It could be anything from a chemical reaction from what people put in the landfill or it could be ashes from a barbecue that sat and smoldered,” Bingham said. “It could pretty much be anything. It’s so hard to tell.”

Unlike a brush fire or a controlled burn, a landfill fire must be extinguished due to the possible trash and the containments burning it would release into the air.

“You have to put it out,” Bingham said. “You can’t let a landfill fire burn. Some people say, ‘let it burn, we’ll have more room’ but you can’t do that because of the air pollutants and we don’t want that smoke being out in the Valley. It isn’t like brush, limbs and trees and stuff like that, it’s trash, plastics and you name it, it’s burning.” 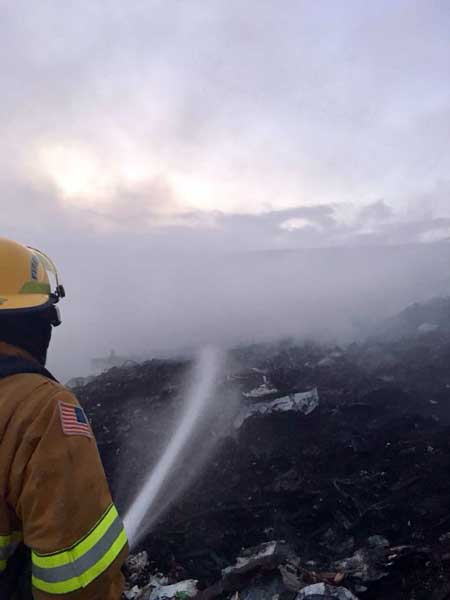 Landfill Supervisor Chad Hogle told Gila Valley Central that fires are a common occurrence at the landfill and they can’t say why they erupt.

“We never know what causes them,” Hogle said. “We just assume its stuff that’s in there that shouldn’t be.”

The landfill does accept burned material and when they do they take extra precaution in handling it.

“When there’s a house fire people bring all that material out here,” Hogle said. “We generally dump that in a different area, let it cool for a couple of days and soak it down again. Even though the fire (that burned the material) has been out for a week or so, we still cover ourselves, soak it again and make sure it’s out before we put it in the landfill and cover it.”

“The landfill has guidelines of what they accept and it’s pretty important for people to follow those guidelines because of this type of incident,” Bingham said. “It’s really important to dispose of your trash properly.”

Materials not accepted at the landfill are:

* Tire not on rims and batteries are accepted only in designated areas.