Contributed Photo: The Safford Downtown Association has partnered with the Gila Valley Historic Preservation Committee to restore the Safford Theatre into an open-air venue.

SAFFORD – It’s been 42 years since the Safford Theatre on Main Street last played a movie, (Camino Y El Mio on Oct. 6, 1975) and, after several failed starts a couple of influentially-backed groups are in the process of re-making the facility into an open-air venue. 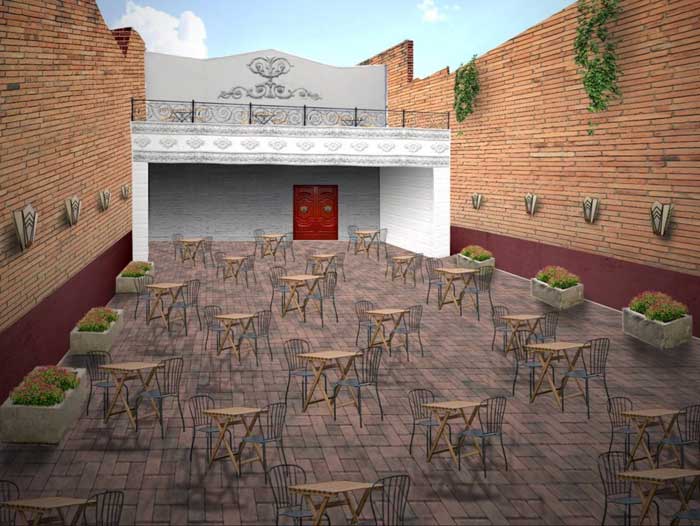 Contributed Photo/Illustration by Dillon McGaughey: An artist’s illustration shows what the open-air facility could look like.

Graham County Supervisor Danny Smith also serves as the president of the Safford Downtown Association. He said the project could be a catalyst to revitalize Downtown and breathe a fresh breath of air into the current sterile environment of the building.

“It’s like there’s a missing tooth in the smile of that block,” Smith said. 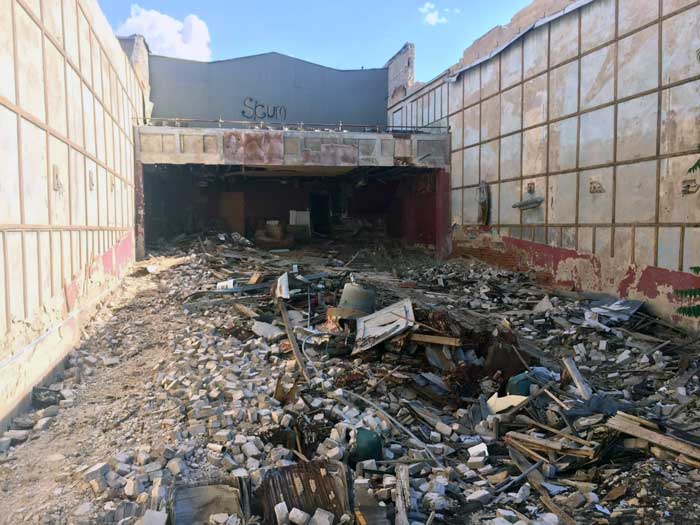 Contributed Photo: This is the current state of the rear portion of the “building”.

He added that adding an entertainment facility to Downtown will help the other businesses in the area by completing the last necessary piece to modern retail.

“The internet has changed retail so much in the last decade where retail in a downtown environment is all about the experience – the shopping, the food, and the entertainment,” Smith said. “You separate any one of those and it doesn’t work.”

According to plans, the back three-quarters of the facility will be resurrected as an open patio with a stage at the northern end of the building, and the front quarter of the building will be restored in grand style with new restrooms, concession stand, and a ticket booth. The group hopes to have the theatre reopened by October 2019.

Smith said what initiated the downtown group helping with the project was when David and Susan Duros donated the building to the Gila Valley Historic Preservation Committee because, as a publicly-owned property, it would be that much easier to generate funds to make it into a viable community property.

The group has reported that 67 individuals and businesses have kept the building project alive for the past 12 years with financial contributions recognized on bricks on the sidewalk.

The budget for the project is roughly $385,000 and, so far, the group has received about $110,000 in cash and in-kind labor donations with another $225,000 possibly available from more than 70 other sources. The group is asking the general public to help fill in the rest of the money needed by sponsoring a portion or aspect of the building. 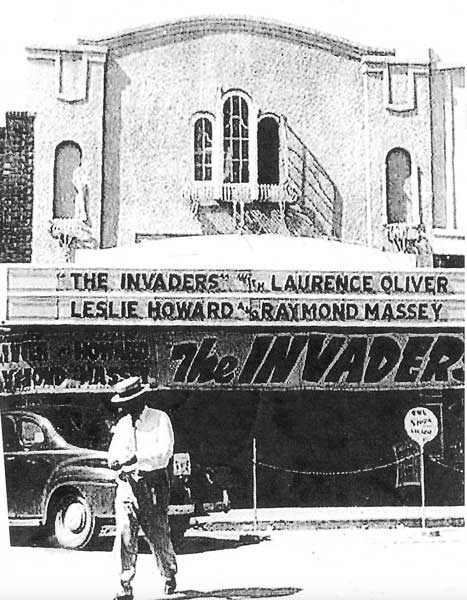 A GoFundMe page will be started to help with fundraising and existing pieces of the old theatre may be sold as well. Additionally, the group is selling bricks to be engraved with donors’ names for $50 per brick. For more information visit the Safford Theatre Project on Facebook at facebook.com/SaffordTheatre/.

Smith said he warmed up to the idea of making the facility an open-air venue after learning that it was how it was originated.

He also added that to renovate the building back into a regular theatre would have likely cost $2.5 to $3.5 million, while the group’s open-air concept project is just $385,000.

“We think we will have a usable space there that will be utilized for all sorts of things,” Smith said.

History of the theatre

The theater opened in May 1911 as the Airdome Theatre and was enclosed with a building and a roof in October the same year. It was remodeled in the fall of 1915, and the Safford Theatre as it is now known – complete with high brick walls stuccoed on the outside and plastered with stenciling and paneling on the inside – came into being. 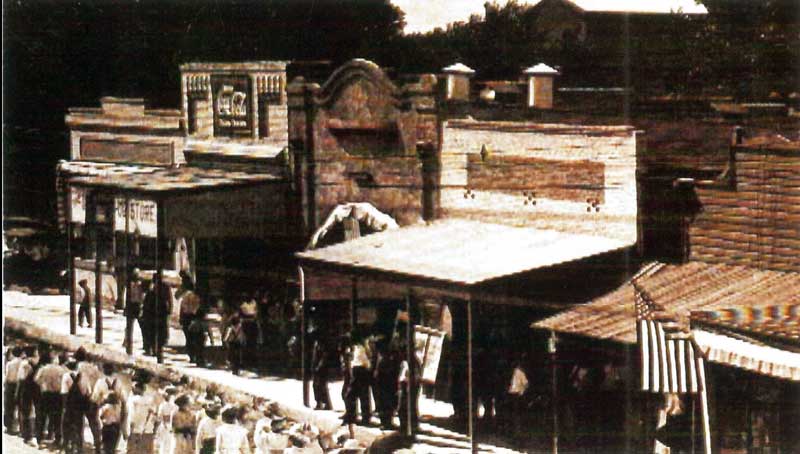 Contributed Photo: The theatre originally opened in May 1911 as the Airdome Theatre.

Those high brick walls have ended up being the theatre’s latest threat of demise.

In 1983, Rudy Maldonado, then grants coordinator for Safford, contacted the State Historic Preservation Office to discuss nominating the building to the National Register of Historic Places. 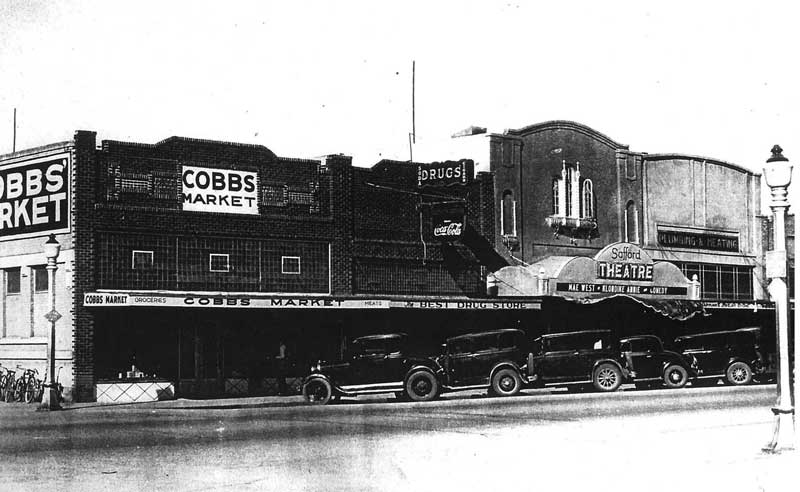 Maldonado was informed then and again in 2004 that the building was too deteriorated to be considered for nomination and the city had not demonstrated the historical significance of the structure.

In 2005, then owners David and Susan Duros planned on tearing down the theatre and putting up a parking lot. After removing the front, however, they discovered an architectural style they felt was worth preserving, thus starting an epic 12-year-long odyssey to save the Historic Safford Theatre.

The building was previously condemned in 2007 after David and Susan Duros asked the city to consider taking over the title. The request prompted a thorough evaluation by city staff, Durrant Architects, and TLCP, a structural engineering firm, to identify the condition of the theatre and address any structural concerns.

Contributed Photo: An inside view of the theatre in 2005 prior to the collapse of the roof.

Then-Special Projects Manager Robert Porter and then- Planning and Community Development Director Pete Stasiak gave a report to the Safford City Council in October 2007. Porter reported the walls were made of unreinforced masonry, and the city erected a 6-foot fence to deter the public from entering the building due to the rotting condition of the walls, roof, and trusses.

Restoration plans continued to be stalled due to lack of funding, however, and in 2007 the alley behind the theatre from Central Avenue to 5th Avenue was eventually closed.

However, the dangerous roof situation that caused the city to close off the alley was taken care of when the roof was dismantled in 2010. The front facade was then given a face lift through donations from local businesses and volunteers working in conjunction with an Eagle Scout project by Boy Scout Trevor Efros in August 2011.

A fire then erupted in the theatre in April 2013 and was so dangerous to fight it prompted Safford Fire Chief to say he wouldn’t send any of his men back into the structure if another fire broke out.

The following have been acknowledged for assisting in the project to date: The GVHPC, The city of Safford, the SDA, David and Susan Duros, Bill Lewis, Joe Dominquez, Safford High School Art Department, CMI Signs, B.C. McKinney Theater consultants, City Electric Supply, Volvo Rental, Home Depot, Safford Builders,  Attorney Jared Smith, Layton Financial, Mark Efros the Graham County Juvenile Probation Department and many more volunteers have already donated hundreds of hours of labor and in-kind services.  The façade of the building has been redone with several façade grants from the SDA funded by the city of Safford and business and property owners in downtown Safford.