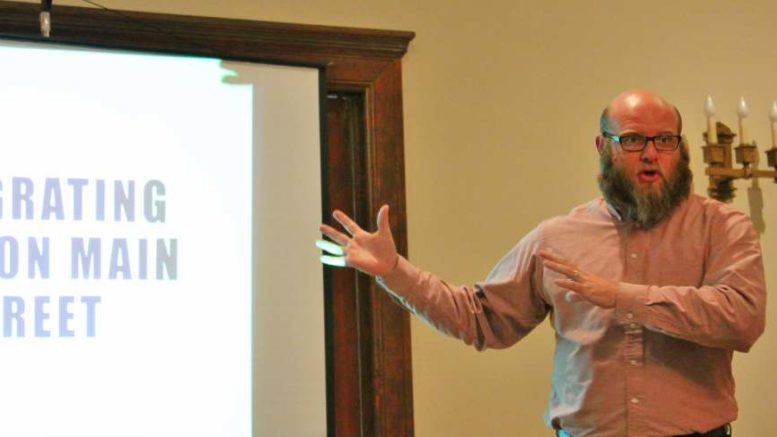 SAFFORD-Art, music, and history are all key aspects of the local main street scene, and a visitor from out of town brought up some possible ideas to hopefully liven up and intensify the local Main Street atmosphere.

Local individuals from multiple areas of the Gila Valley community gathered Wednesday night at the Safford City Annex building to listen to the lecture of David Crummey, from Mesa. Crummey was one of the key designers in the Mesa Main Street rejuvenation 5 years ago, taking the beige-plagued sleepy street in Mesa and turning it into a lively area featuring the arts and community.

“We used to be the sleepiest town in Arizona,” Crummey said. “We just had all of this energy that hadn’t come down before because we hadn’t asked.”

Crummey’s presentation included how to make plans on creating attractive art pieces and interest pieces in the Main Street area in weeks and not years. One of Crummey’s major points was to create ways to engage with the community, and bringing people’s interests back to the Main Street. Stressing the fact that a community should use whatever it has as an asset, Crummy began his presentation with Mesa’s first and smallest effort, which was painting rocks. These projects gradually intensified, to include murals that weren’t actually murals. According to Mesa’s code, a mural can only be placed once it has been passed by a board, and an extremely high fine has been paid. To skirt around, while not completely disobeying this ordinance, Crummy and his associates worked with the artists of the community to create removable works of art painted on plywood. The next goal  after having something for the locals to see, was to get them to come see it. The answer was simple: Throw a party.

“We must have had over 200 people show up,” Crummey said, “People want stuff to do!”

Lastly, Crummey told the audience that by making subtle improvements, sprucing up paint and cleaning up entryways, other business owners followed suit. The efforts of several passionate individuals had ripple effects, causing others to be inspired. 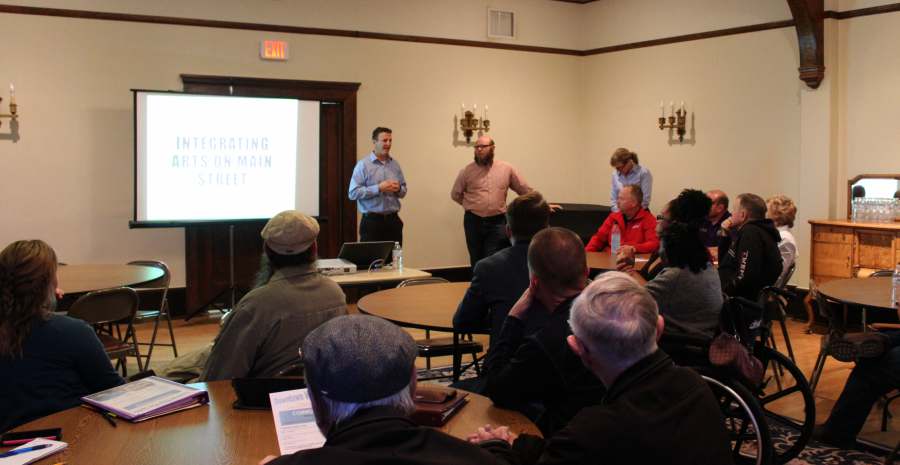 Brooke Curley Photo/Gila Valley Central: Individuals from all over the Gila Valley community came to the event to listen to David Crummey’s ideas and experiences for sprucing up the downtown area.

Back alleyways were also addressed, and Crummey said that although he couldn’t get some business owners to rejuvenate their entire business backs, the simple additions of a new paint job, awnings, and light, did miracles for exterior aesthetics. Near the end of his presentation, Crummey urged attendees to work closely with leaders within the community, find allies, and have a fun time. However, he did have a warning that not every endeavor might succeed.

“Just do something with your neighbors and have fun. Work closely with community leaders, and find your allies and co-conspirators,” Crummey said. “Part of experimenting is failing. But find what works for you and gives you joy.”

Owner of the Creative Flow Studio, and member of the Downtown Association, Brianna DeRusha Morris, attended the event with her husband David. Brianna Gila Valley Central that she has high hopes for the future of Safford’s main street and downtown. She also said that she appreciated Crummey’s ideas, and hopes to work with the local youth to gain feedback as to what they want from their hometown.

“David’s ideas were great. I want to make the art in downtown happen! I plan to work with the local youth to get feedback on what the next generation wants. I’m having more yoga classes on Saturdays and offering youth classes. We are open for Massage seven days a week and we now offer esthetics and reiki therapy too. Bringing in visionaries was a great plan and the more community involvement the better,” Brianna said. “We want to encourage more walking, so we’re going to get the buildings decorated and honored with art from the people that love Safford so walking is pleasant!”

David Morris, told Gila Valley Central that he believed that the downtown in Safford is already great and that the people of the Gila Valley already have the heart and time to make it even better.

Brianna later went on to say that on behalf of her husband and herself, she would like to thank the individuals who are already working so hard on the Main Street area, and would encourage them to invite their friends to come to the meetings.

“I want to say thank you to everyone that’s already doing their part, and encourage them to keep inviting friends to join these meetings and show up and act,” Brianna said.