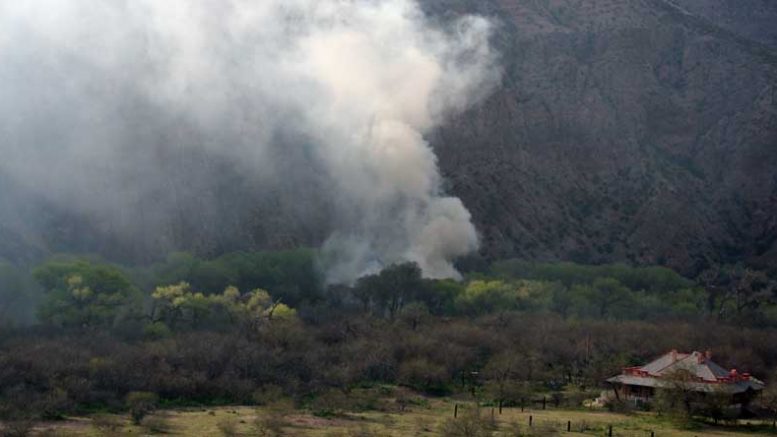 Photo By Gualterio Casias: Smoke rises from a driftwood fire along the San Francisco River on Feb. 28 and makes for a smoky scene as it spreads across the canyon due to occasional strong gusts of wind. The blaze was only about 150 yards from the historic Potter ranch house. Quick response by the Clifton and Morenci fire departments kept the fire from moving any closer to the house, located in the San Francisco Canyon about two miles north of Clifton.

A famous poem asks “Who has seen the wind?” One might say that Clifton and Morenci firefighters saw it via the thick smoke in the San Francisco River Canyon. It came from a driftwood fire that burned close to the historic Potter ranch house about two miles north of Clifton on Tuesday, Feb. 28.

The smoke was at times a thick, white column rising into the air. At other times, smoke was dissipated by occasional bursts of strong winds, which caused it to spread across the canyon. The fire burned about 150 yards from the ranch house and was located and contained along one bank of the river. The house, which was built in 1901 and is listed on the National Register of Historic Places, never appeared to be under threat from the blaze because of the firefighters’ rapid response. 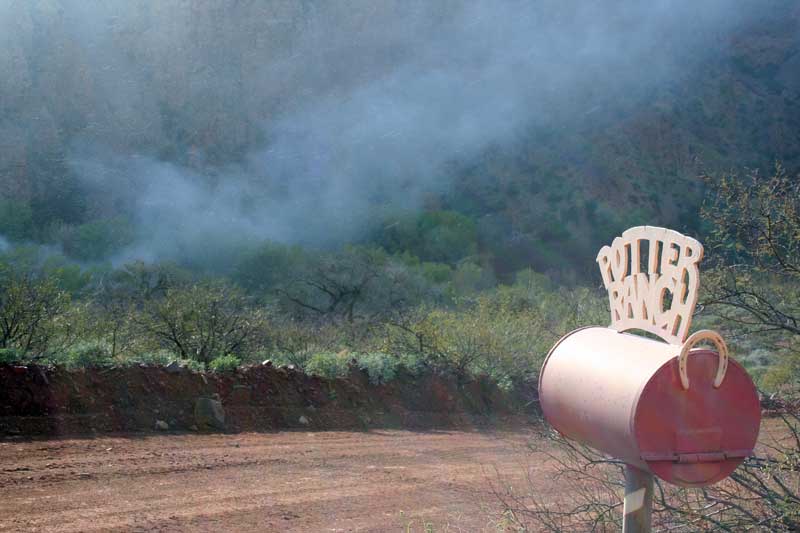 Photo by Gualterio Casias: A trace of smoke can be seen drifting by the mailbox of the historic Potter ranch house along the San Francisco River Road north of Clifton. A large column of smoke slightly downstream from this scene was the result of a driftwood fire along the river.

Clifton Fire Chief Peter Ortega said the alert was called in at 3:14 p.m. Clifton immediately dispatched two large trucks. The Morenci Fire Association quickly sent two of its large firetrucks to join Clifton’s crews at the scene. Driftwood, such as that which was on fire, is not uncommon along the banks of the rapid-flowing San Francisco River. According to the U.S. Geological survey, it is one of the eight fastest running rivers in North America. It is also one of only four rivers in Arizona that flows year round.

Ortega said the alert came from Greenlee County Public Works road grader operator Toni Lawrence, who was grading the San Francisco River Road. It runs alongside and high above the canyon where the Potter ranch house is located. 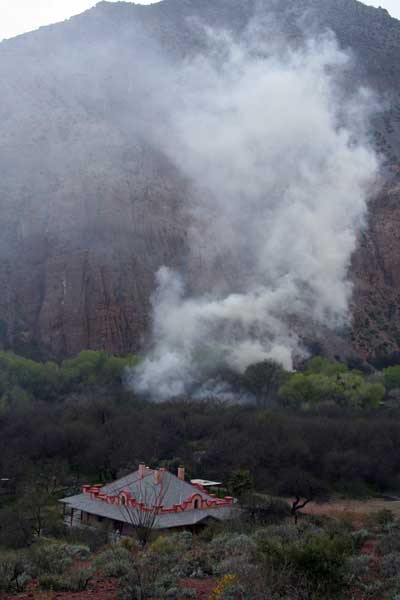 Photo by Gualterio Casias: Heavy smoke rises from a driftwood fire along the San Francisco River north of Clifton on Feb. 28. It came within about 150 yards of the historic Potter ranch house, but a quick response by Clifton and Morenci firefighters kept the fire at bay and stopped any threat to the residence.

The road provides the only access to the ranch house. Its primary use is for public access to the river for recreation purposes: fishing, picnics and camping. It is most heavily used in the summer.

The chief said of the overall response that included the Morenci Fire Association and the county, “This was a great job with everybody working together.”

Although there was still some smoke by 5 p.m., the fire was well under control. Firefighters returned to their stations by 7:30 p.m. Ortega said the cause of the fire is unknown. He said he asked Lawrence if she had seen anyone in the immediate area and she said she had not. He also said he doubted any speculation about the fire being caused by lightning.

While storm clouds hovered over Clifton and Morenci until late Tuesday morning, only a sprinkle of rain fell over the area. No lightning was seen nor any thunder heard during that time. The sun shined most of the afternoon although dark clouds did linger in the horizon.