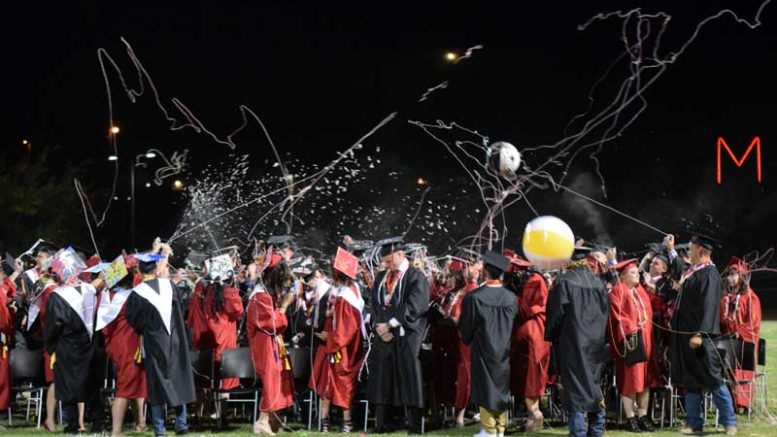 Photo By Raymundo Frasquillo: The Morenci graduating Class of 2017 was offered more than $935,000 in scholarships.

The time to work was temporarily put on hold for a pause to celebrate and enjoy the fruits of one’s labor.

Morenci’s highly self-motivated Class of 2017 was collectively offered 109 scholarship awards worth more than $935,488, some to specific institutions of higher learning, others to a vocational field of their choice. One student amassed a six-figure total, 20 a five-figure total, while others were awarded a two-figure sum. Regardless of the amount, with continual rising costs of higher education, it all helps. 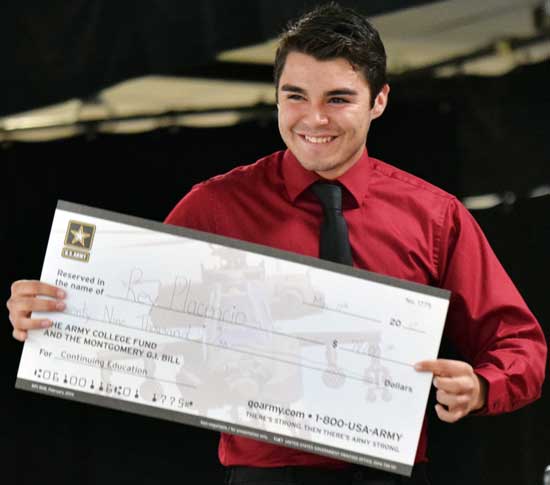 Photo By Raymundo Frasquillo: Reynaldo Placencio walks off the stage with a check from a U.S. Army enlistment for his continuing education.

The Wildcat Country’s graduating class lists a 79-member roster, some more academically accomplished than others, but all of them understanding the purpose of being in high school. Not only did the top 10 percent (8) get financial assistance, but 37 total, or 48 percent, (37-79) of the class members were offered scholarships.

“Their GPA (grade point average) and or ACT (American College Testing) test or SAT (Scholastic Aptitude Test, SAT Reasoning Test – SAT-I, SAT Subject Tests – SAT-II) test score determines who gets some scholarships,” fourth-year Morenci guidance counselor Veronica Morales said. “Some scholarship applications I can hand out to students as they pass by, but I don’t have time to hand out all the forms. They are available on the counselor school web page.”

Photo By Raymundo Frasquillo: Morenci native son Casey Woodall gave the keynote talk to the graduating class. The two-time collegiate All-American and three-time Academic All-American was near giving up following his first year as a wrestler at Adams State College, but decided to return and work harder. His message was to not be afraid to fail, learn from your mistakes.

All students are aware of what is available as an orientation takes place before students set foot in a high school classroom. A session is held in May for eighth graders prior to being promoted to high school.

“We have a meeting with parents and students before they take a class to explain how they can leave high school with further education being paid for,” Morales said. “We have another meeting during their sophomore year to see if they are eligible to take college-level classes in their junior and senior years.”

There is also one-on-one guidance throughout the school year.

“Not all students apply for available scholarships,” she said. “They fail to take the time to fill out forms or turn in by the deadline.”

The following students were offered scholarships.

Photo By Raymundo Frasquillo: Top 10 percent class member Elyssa Vigil wears an ear-to-ear smile as she returns to her seat after receiving her high school diploma. She was one of 15 Morenci students to receive an Associate Degree from EAC this spring.

Photo By Raymundo Frasquillo: Christian White checks his legacy as he prepares to leave Wildcat Memorial Gymnasium for a final time as a high school student. The 3-time state wrestling champion is one of six Morenci grads who will have further education paid for by his athletic prowess. 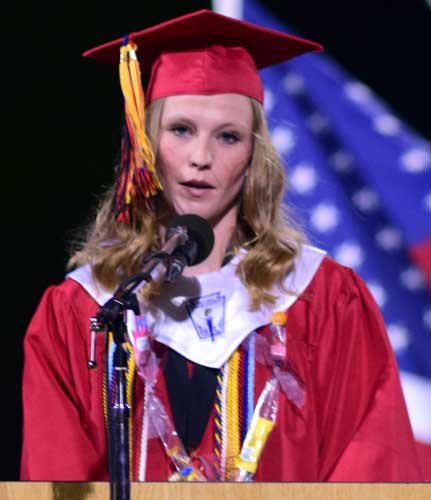 Photo By Raymundo Frasquillo: Student speaker Madelyn Olmsted used herself as an example of overcoming a language barrier to become the class valedictorian. The New Mexico State University bound student needed to learn a foreign language to start school in South America.

During the previous five years (2012-16), Morenci graduates have been offered more than $4,346,715 worth of scholarships for 223 of 431 students, or 53 percent. Some scholarships had an unknown amount when the totals were compiled. 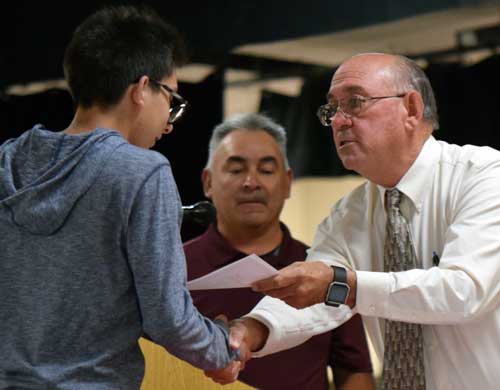 There were three students receiving an AGEC-A (Arizona General Education Curriculum) status, of being able to transfer to a public university without loss of credits. Those were Sabyn Martinez, Alyssa Murillo and Shae Sanchez.

Morenci High School is an A+ School of Excellence  award recipient presented by the Arizona Educational Foundation.