SAFFORD – The zombies took to the streets, but nobody lost their brains.

It was the inaugural 5K and Fun Run benefiting the Safford High School Band and Wrestling departments Saturday morning. Students were decked out in zombie wear and armed with bottles of red liquid signifying blood, ready to chase the runners.

The races began at 10 a.m. at the Safford High School. Parents and students volunteered in the event, which featured breakfast and snacks for sale, rounding out a morning of exercise and carbs. However, no brains were digested.

Contributed Photo Courtesy Phelan Bauman: Safford students stand at the ready and in full zombie garb and makeup to chase down the runners.

Phelan Bauman, one of the Safford High School Band directors, organized and planned the fundraiser. 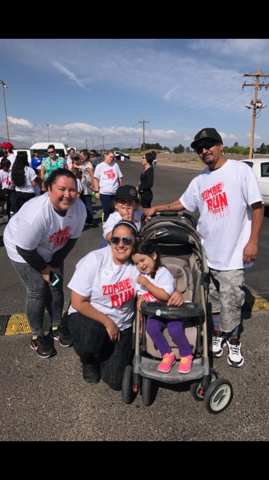 Contributed Photo Courtesy/Phelan Bauman: This family participated in the fun run portion of the zombie run.

“A wrestling student named Hayden Finch came to me with the idea and helped me organize and plan,” Bauman said. “Hayden and our band drum major and club president reached out to the community and got donations for prizes and the concession stands.”

“It was a great fundraiser bringing together a unique combination of students with band and wrestlers.” Bauman said. “Both groups had a great time and we were able to raise some money. We plan to do it next year and hope to have it be even bigger and better.”