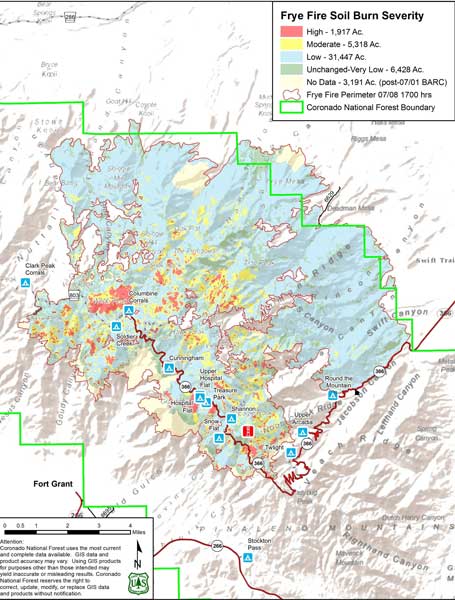 The Coronado National Forest recently received funding to implement the BAER’s plan, which includes aerial reseeding of 1,023 acres of the fire that burned at the high-severity level.

According to a burn severity map previously released, roughly 1,917 acres burned at a high severity (about 5 percent), with 5,318 at moderate severity and the majority of the fire, 31,447 acres at low severity.

The approved funding will allow for the reseeding as well as additional projects, such as clearing drainage canals of debris and stabilizing and protecting roads, trails, and developed sites.

The monsoon rains that helped put out the Frye Fire are now adding its own dangerous element as burned areas become more prone to flash floods. Rain has caused debris to cascade through canyons downstream recently, including very dangerous conditions in Wet Canyon. 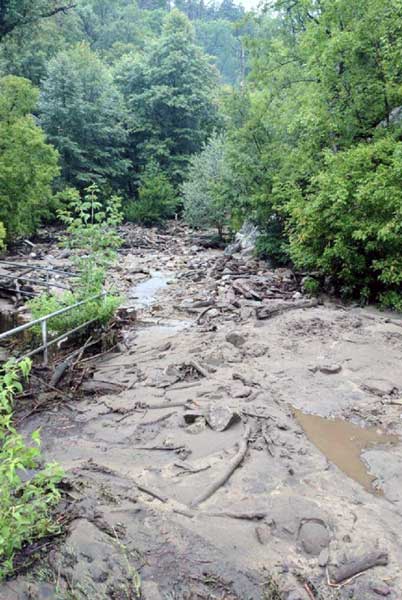 Contributed Photo: Wet Canyon on Mount Graham turned into a river filled with flowing debris after rains poured on the mountain Saturday.

Rain gauges were installed by the Arizona Department of Water Resources in various locations on the mountain and provide real-time information on rainfall totals. Weather-related hazards such as the potential for flash flooding, however, are issued by the National Weather Service, which has issued multiple flash flood watches and at least one warning for the area.

The mountain receives various amounts of rain. A gauge in Jacobson Canyon listed nearly half an inch of rain for Sunday and one at Frye Mesa showed .39 of an inch, while Heliograph Peak only measured .12 of an inch for Sunday and just .19 at Emerald Peak. The total for the past two weeks, however, shows Emerald Peak with 4.25 inches, compared with 1.10 inches for Jacobson Canyon, .94 of an inch for Frye Mesa and 2.40 inches for Heliograph Peak. In contrast, the Arizona Meteorological Network’s measuring station in Solomon last measured precipitation registered nearly on inch falling July 19 to bring the yearly total of the area to 3.29 inches.

According to a news release, the Forest Service will move forward with the BAER treatments over the next several weeks. The projects will be monitored to determine their success, but the effectiveness will not be known for several months, according to the release.

Mount Graham remains closed to the general public above Ladybug Saddle, but lower areas, including Noon Creek Day Use Site, Round the Mountain Campsite, Upper and Lower Arcadia Campground and Turkey Flat Cabin Tract have opened. Due to the flooding, however, Noon Creek Day Use Site and Wet Canyon have been reclosed until the debris is removed.