Contributed Photo: A plane drops retardant on the Crack Fire on Friday. The new fire has burned about 100 acres roughly 12 miles west of the Frye Fire.

MOUNT GRAHAM – As the major Frye Fire on Mount Graham is starting to be corralled and wind down, another start just 12 miles away continues to build despite immediate suppression efforts. 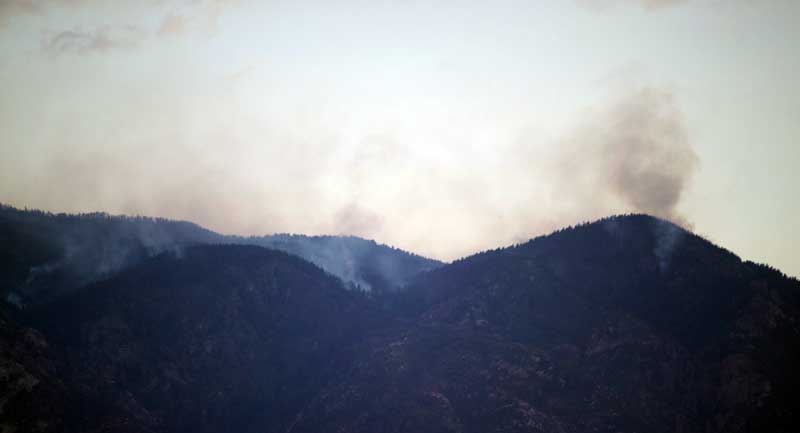 Jon Johnson Photo/Gila Valley Central: Pockets on the north side of Mount Graham continue to ignite, but most of the fire has moved onto the southern side of the mountain.

With the Frye Fire at minimal activity, the Forest Service authorized a couple of crews, a dozer and air support, including helicopters, a tanker and single-engine planes, to attack the Crack Tank Fire, which is burning near Lindsey Canyon southwest of Safford. The fire is burning on Arizona State Land. Crews also responded to the Black Rock Fire on Bureau of Land Management property northwest of Safford, according to a news release.

The Southwest Area Type 2 Team 5 took over management of the Frye Fire at 6 p.m., Friday. Public information officer Clifton Russell said resources from the Frye Fire were initially used on the fires because the resources were available. 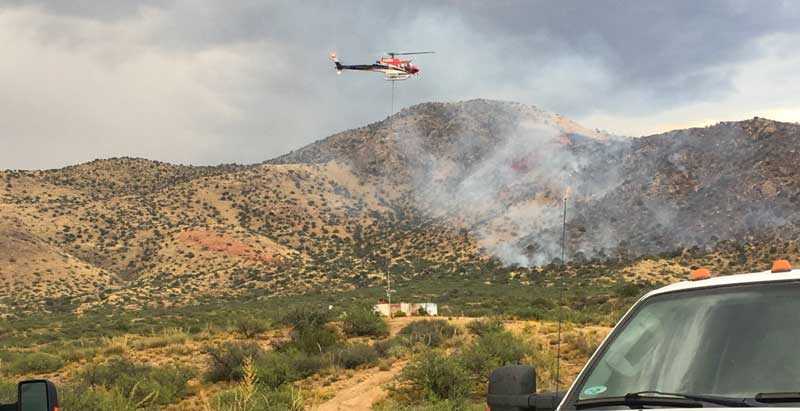 Contributed Photo: A helicopter fills its payload before making another drop at the Crack Tank Fire on Friday.

“Because we already had resources out here and the fire behavior was a little slow they felt comfortable enough to send them out since they were already here,” Russell said. “We were happy to respond and help out local crews.”

With the new team coming in, the group is getting a feeling for the fire and examining its behavior and growth pattern. The new team has installed a spike camp with roughly 100 firefighters in the Fort Grant area to be on scene 24 hours a day to fight the southern progression of the fire. 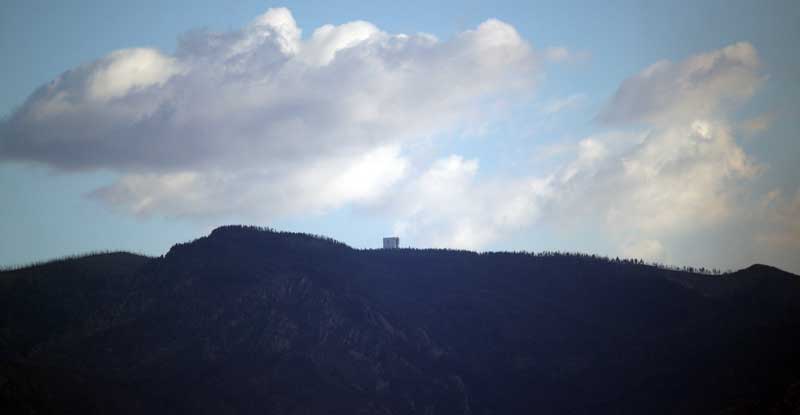 Jon Johnson Photo/Gila Valley Central: The MGIO, including the LBT seen here, escaped without serious damage after the fire swept through the area.

“Since we just got on scene, we’re assessing everything, checking all the control lines that we have over there and just kind of sizing it up for us,” Russell said.

Helicopters continue to check the Frye Fire with water drops northeast of Fort Grant, and retardant was utilized to halt the fire from spreading toward upper Babcock Canyon along the western side of the Riggs Lake area.

Crews also continue to thwart the fire’s advance into Turkey Flat, which also has various fire suppression assets on the ground. The same goes for Angle Orchard.

Rain is forecast in the region for this weekend and the monsoon season is eagerly anticipated to help mitigate the fire and fully extinguish it.

Mount Graham remains closed to the general public and the Coronado National Forest is still under Stage 2 Fire Restrictions. Additionally, the area near the Frye Fire is under temporary flight restrictions, including unmanned vehicles (drones.)