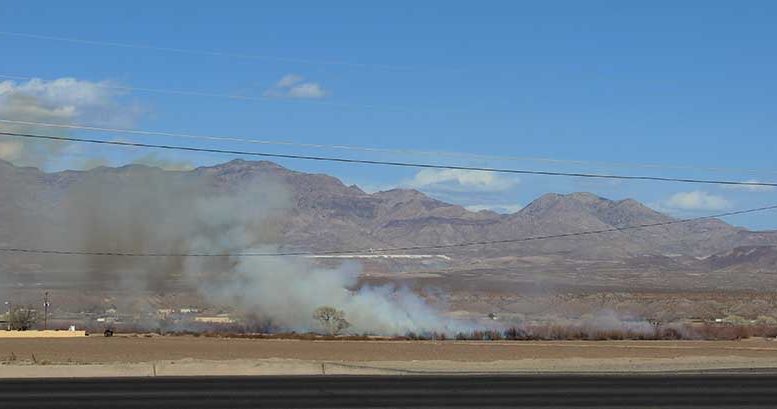 Contributed photo/ Courtesy of Dove Schnebly: The fire began at roughly 1:30 pm, and billowed up into the sky above Thatcher.

THATCHER- At roughly 2:00 pm on Monday, black and gray smoke billowed up above the Gila River in Thatcher as local farmers attempted to clear a waterway.

Gila Valley Central contacted the Thatcher Fire Chief Mike Payne, and was informed the fire was created by local farmers. Apparently, the farmers were attempting to clear a culvert that emptied rainwater into the river. The Thatcher Fire Department was called to the scene, where the newly refurbished pumper humvee vehicle was used to cross over field roads and check on the situation while the tanker waited for instruction. Chief Payne told Gila Valley Central that the fire hadn’t been reported as a controlled burn. However, local farmers were doing brush clearing that did get into the bottom of the river.

“It hadn’t been reported, but the farmers were burning out a waste way down there, (it’s) a big ditch that takes stormwater from the shopping center to that area,” Payne said. “It (the fire) got into the river bottom, but it was an area where it burned just a few years ago, so there wasn’t a lot of big stuff in there.”

Chief Payne told Gila Valley Central that several years ago the Gila River had burned, but the Thatcher Fire Department had managed to get it under control. Because of the previous fire, the new fire that started in the bottom of the river didn’t have any new fuel to consume.

“We stopped it at the West end that time, and the East end. So it was pretty much contained to one area in there. They (the farmers) burnt it out so that all the tailwate would go down into the ditch and not be backed up into the fields.”

Chief Payne said that although it can be sad for the river to burn from time to time, it also can be effective for the underbrush to be taken out of the river by natural elements, to prevent overflow.

Wildfire near Pima a controlled burn