THATCHER – The pink house had been used as college student housing for decades, but on Saturday, it was burned to the ground and used as an area of practice for the Thatcher Fire Department.

Brooke Curley Photo/Gila Valley Central: In this practice scenario, the roof collapses and the firemen are forced to break a hole in a wall to escape the flames. As you can see here, the firemen have already hacked a hole the wall and are in the process of climbing through it.

Thatcher Fire Chief Mike Payne told Gila Valley Central that the other fire departments were alerted to the practice burn earlier, but were over scheduled and couldn’t attend. However, even though the Thatcher Fire Department was the only department attending, they had the entire street blocked off with multiple families watching the practice procedures.

Brooke Curley Photo/Gila Valley Central: At this point in the scenario, the roof has fallen in and the firefighters communicate through a hole they have made to escape the flames.

The practice procedures included fire ventilation, in which the fire fighters cut holes in the roof of the building in order to allow the fire’s heat and smoke to be released into the outside environment. By venting the hot air of the fire, the firefighters are able to keep a fire contained and to put it out. Otherwise, the fire would spread much easier through the entire house, engulfing everything in heat and flame.

Another practice procedure was to find a victim, or in this case a mannequin, which has been secured somewhere in the burning house and retrieve the victim. However, not only did firefighters have to retrieve the victim, they had to go through a maze inside of the house. This maze was created by the fire department and included scenario and environmental challenges.

“Right now what they’re doing is they’re going in and searching for victim,” Payne said. “They’re going into this room right here and we have it rigged so there’s a porch in there and that’s where the floor collapses. They get out of that then they go through another room that has wires all over the place and (they) get tangled up in it.”

After finding the victim, firefighters eventually had to cut open a hole in the wall to come to an easy exit. Each team going through the house had to make new holes and crawl through them, dragging the mannequin behind them.

Contributed Photo/Courtesy David Fick: Once the flames were left to demolish the house, the heat intensified and the smoke became black and was seen for miles throughout the Gila Valley.

“When they’re in with the victim, some of the roof collapses and they are trapped in that room, so what they have to do is breech the wall,” Payne said.

Eventually, the house was left to burn, with the Thatcher Fire Department keeping a careful watch on it. The house began burning at 10 a.m., and was mostly out before 3 p.m. 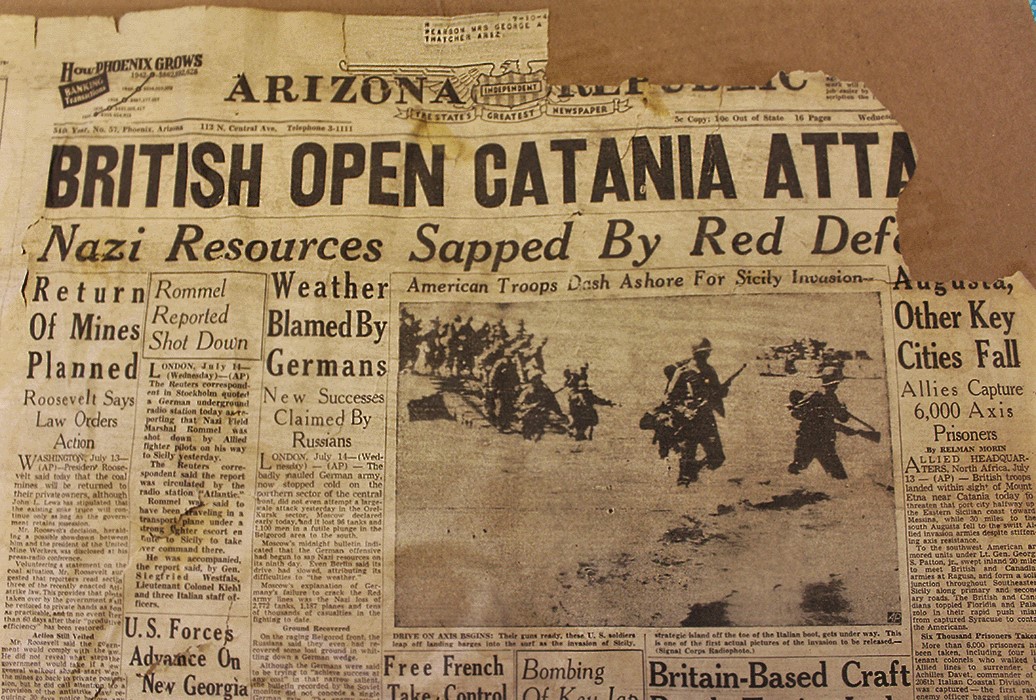 Brooke Curley Photo/Gila Valley Central: Saved from the blaze by Fire Chief Mike Payne, this front page of the Arizona Republic from July, 1943, was under the flooring in the home. The photo in the paper of the U.S forces storming a Sicily beach is one of the first to be released depicting the event. If one looks closely, they can see the original paper subscribers to be Mr. and Mrs. George A. Pearson of Thatcher.

Wildfire near Pima a controlled burn