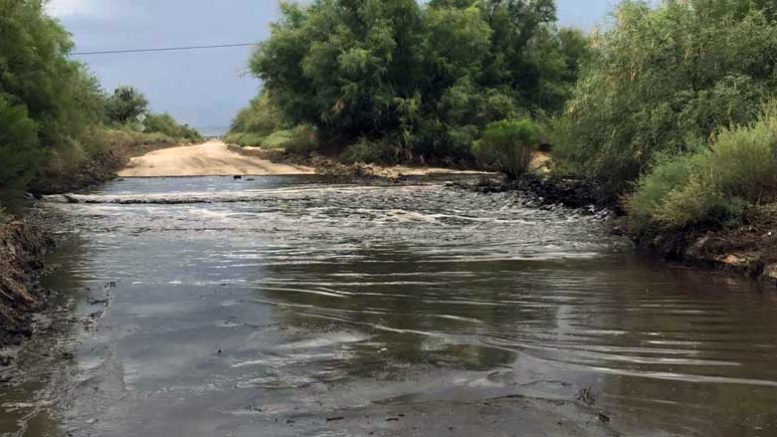 PIMA – Runoff from the Frye Fire came tumbling down Ash Creek on Thursday afternoon, stranding motorists who were not able to cross Cluff Ranch Road. 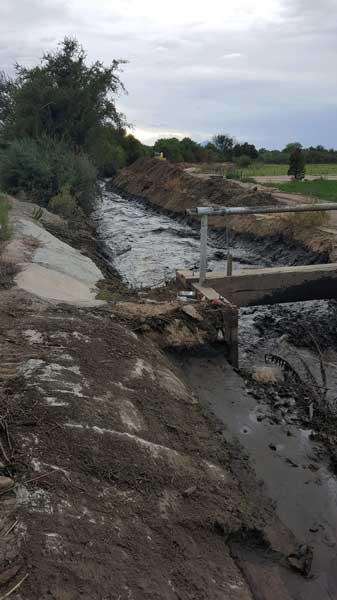 Contributed Photo/Courtesy town of Pima: The deluge was contained in Ash Creek thanks, in part, to the diligent work of cleaning out the waterway.

The rain hit an area of Mount Graham that was particularly devastated by the Frye Fire and nothing was there to hold back the cascading amount of water, ash, and debris. The thick, black liquid poured over the side and into the creek, heading at a furious pace toward the town of Pima.

A resident who lives in Ash Creek Canyon commented that a 25-foot wall of water devastated the area and upended 18-inch diameter trees, displacing them into standing trees 12 feet into the air.

Down below, a mail carrier finishing her rounds wasn’t able to head back as her way was cut off by the flooding waters. After waiting for more than an hour and a half, the mail carrier attempted to go around another way that leads into Central but then got her car stuck in the sand in a wash that way.

Other motorists were at a loss as to how to reach their homes as the rushing water cut them off.

Further downstream, the current stayed in its channel as Ash Creek entered the town of Pima. Interim Town Manager Sean Lewis credited the effectiveness of the creek to clean-out preparations the town performed in anticipation of flooding scenarios.

“Had we not worked on it, it would have breached,” Lewis said. “The work is definitely paying off.”

Pima hired a Gradall operator and paid other workers to clear out several waterways after receiving a grant when Graham County passed a resolution declaring a state of emergency for the Gila Valley due to the possibility of flooding. 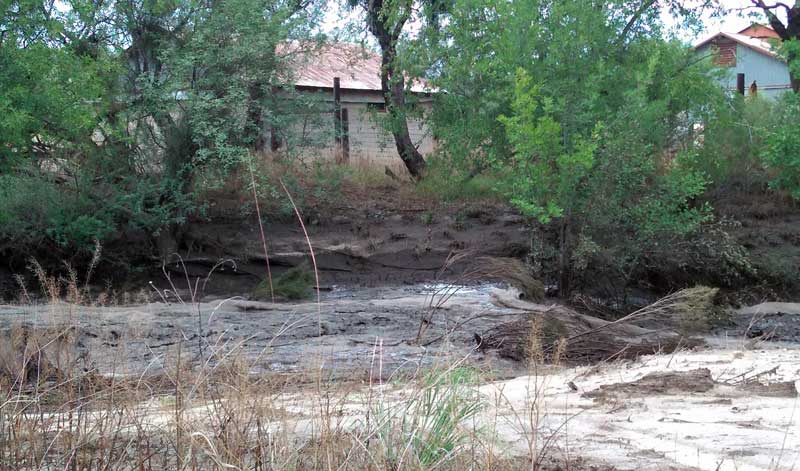 As for the Cluff Ranch Road flooding, the Graham County Highway Department put up signs advising of the road being flooded out and had to wait until the water receded to bring in heavy equipment to repair the road.

The flooding also affects Mount Graham and its roads, and the Coronado National Forest has received funding to move forward with a Burned Area Emergency Response (BAER) Team’s restoration plan.

According to a burn severity map previously released, roughly 1,917 acres burned at a high severity (about 5 percent), with 5,318 at moderate severity and the majority of the fire, 31,447 acres at low severity.

Some areas of Mount Graham have seen more than 5 inches of rain in the last month.