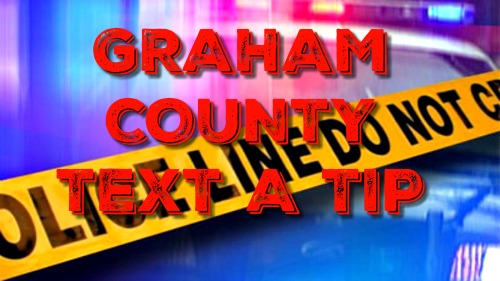 Available now in Graham County, the Text a Tip service is one more tool for the community to prevent local crime.

SAFFORD – Sometimes it can be hard to report wrong doings to authorities. Now, however, there is a system in place where all one has to do is send an anonymous text.

Multiple police agencies from Los Angeles to New York have adopted the Text a Tip service, and now it is available in Graham County. Anytime someone wants to report a crime but does not want to get involved or let it be known they “dropped the dime”, they can simply anonymously text the tip to the authorities.

Crimes that can be reported could be anything from someone using or carrying illegal drugs to seeing a child riding in a car without wearing a seat belt. Any crime can be reported at any time because the text is relayed instantly to the police dispatch. As soon as a dispatcher receives the message, they alert the agencies in charge of the area. However, if the individual with a phone is in danger, they should call 9-1-1. Completely anonymous, the text will not give the police any information about the text sender.

Top use the service, simply text grahamtip to the Tip Line at 50911 and write a short message detailing your tip.

Thatcher Police Chief Shaffen Woods said the text to tip service has been in the works in Graham County for a long time.

“The Graham County Substance Abuse Coalition was heavily involved in starting it along with all the law enforcement agencies,” Wood said. “But basically what we hope to get out of it is another tool for citizens to report crimes and or suspicious activity. It allows emergency services to communicate better as well.”

Kathy Grimes of the Graham County Substance Abuse Coalition has been working on the text to tip program for more than a year and believes it to be a good program. Grimes said the text a tip is one more way for the community to take action.

“It’s just another tool in our toolbox that can be utilized by community members to report things that aren’t quite right,” she said. “Maybe they see drug activity, or they suspect somebody is driving under the influence, but if it’s a life or death emergency, please do not use text to tip.”

Grimes also said the text a tip program will hopefully be an anti-bullying aid. The coalition intends to educate the schools as to the many uses of the program. 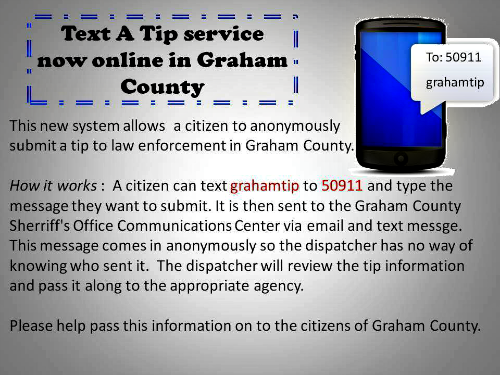