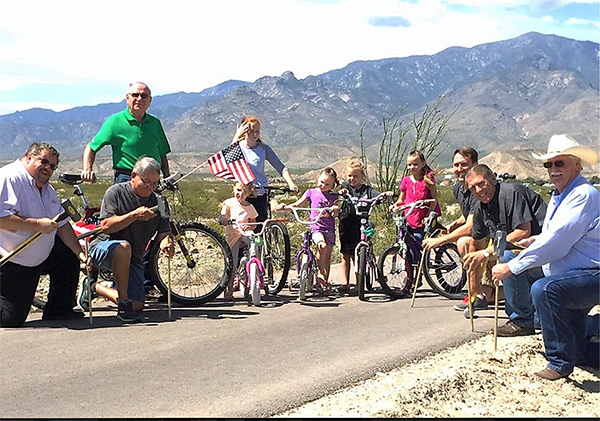 Area leaders celebrate with a golden spike ceremony in 2016 the opening of the section of the multiuse path connecting Safford and Thatcher, - Contributed Photo

GRAHAM COUNTY – While not quite transcontinental, the leaders of Safford, Thatcher and Graham County celebrated the unification of the area’s multiuse path system with a golden spike ceremony Tuesday.

The event was an homage to the golden spike ceremony at Promontory Summit, Utah, in 1869, which joined the Union Pacific and Central Pacific railroads to create the first transcontinental railroad across the United States.

Seventeen years after Safford’s original multiuse path project was approved, the area now has a connected multiuse path system for nonmotorized transportation and pedestrians that runs edge to edge from the communities of Thatcher and Safford.

The county’s portion of the multiuse path system runs along Golf Course Road and connects the end of the Safford system on the same road to the end of Thacher’s section at Reay Lane. Bicyclists, skaters, walkers and runners now have a designated pathway off of motorized traffic roadways that stretches from U.S. Highway 70 and Reay Lane in Thatcher to U.S. Highway 191 and Discovery Park Boulevard in Safford. The pathways, along with adjoining sidewalks, encompass roughly 25 miles of loops and trails, according to Graham County Manager Terry Cooper.

“For those of us (who) have utilized Golf Course Road to get into town on foot, there’s a lot of traffic and this certainly is a lot safer for the residents,” Cooper said.

Cooper and other area leaders spoke to Gila Valley Central and all lamented on the popularity of the trails.

“They are certainly used a lot,” Cooper said. “I come into town fairly early and the paths are always busy, whether it’s 5 o’clock in the morning or later on at night after the heat settles down a little bit. So I think, for the wellness of the community, these paths are very important.”

“It is a popular program that I continue to receive compliments and thanks from the public,” Supervisor Danny Smith said. “Safford jumped on the grant opportunity and coordinated with the other Gila Valley entities to make a complete system.”

The majority of the cost of the system was paid by federal transportation grants that were run through the Arizona Department of Transportation.

“I’d like solar-powered lights along the pathways for people who would like to walk in the evenings or perhaps the early morning hours,” Petty said. “That’s really nice during the summer time. So lighting is on our radar.”