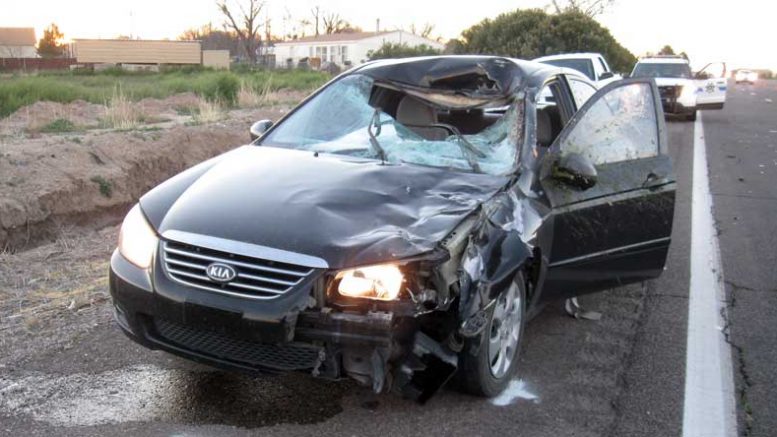 Contributed Photo/Courtesy DPS: Irene Elizabeth Roberts, 64, of Safford, was flown to Banner - UMC in Tucson on Monday after being severely injured when she struck a loose horse on U.S. Highway 70.

CENTRAL – A Safford woman was flown to a Tucson hospital Monday after being severely injured in a collision with a horse on U.S. Highway 70. The horse was deceased at the scene.

Irene Elizabeth Roberts, 64, was westbound in a black, 2007 Kia four-door sedan at about 6 a.m. when she struck a horse on the highway near the intersection with Norton Road.

According to a report from the Arizona Department of Public Safety, a group of people were attempting to shoo some loose horses from the highway but were not successful.

The horse collided with the front driver’s side of the Kia and tore open the car’s roof as it was catapulted over the vehicle. The driver’s compartment was heavily damaged, and Roberts suffered severe injuries, including a facial fracture, head lacerations and chest pains. She was taken to Mt. Graham Regional Medical Center by Lifeline Ambulance and then flown to Banner – University Medical Center Tucson. As of early Monday evening, she was listed as being in critical condition.

A second vehicle, a red, 2014 Dodge Ram pickup truck driven by Crissy Goseyun, 34, of Bylas, was also westbound in the second lane and was unable to avoid Roberts’ Kia after the collision with the horse. Goseyun’s truck then struck the rear of the car. Goseyun was not injured in the crash but went to the hospital for anxiety. 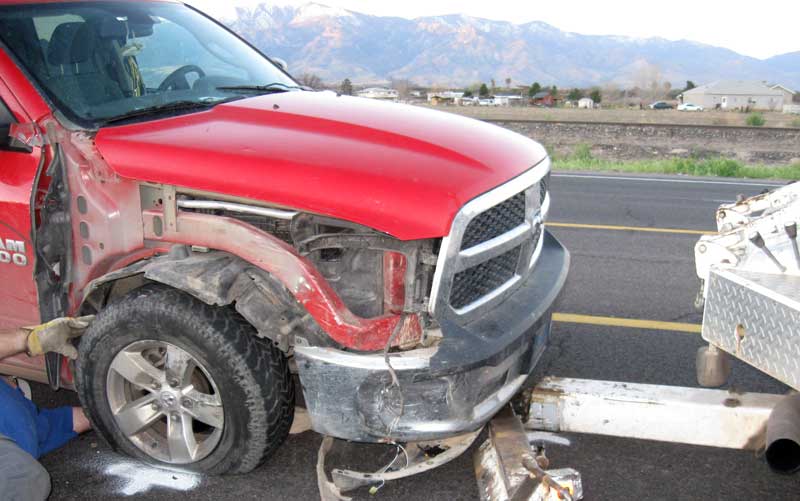 Contributed Photo/Courtesy DPS: This red truck driven by Crissy Goseyun, 34, of Bylas, wasn’t able to avoid the Kia after it struck the horse.

Highway traffic was detoured through the center turn lane during cleanup until about 7:40 a.m., when the highway was fully reopened.

Nuttall’s Towing removed the vehicles from the roadway.

U-turn ends up being wrong turn