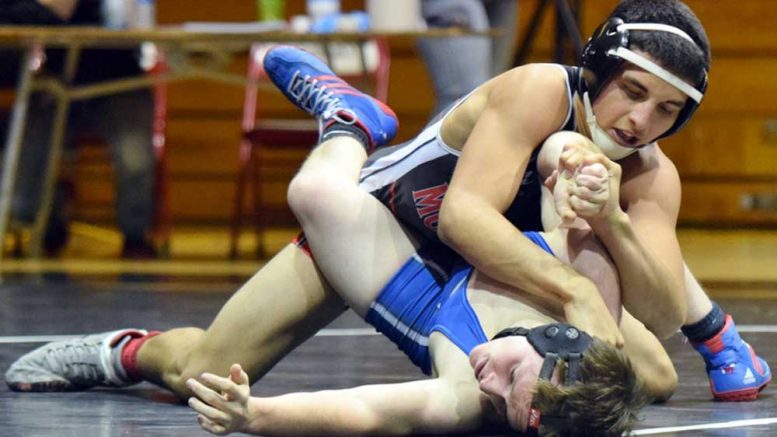 Photo By Raymundo Frasquillo: Morenci sophomore Mark Roybal (132) makes a move to post one of two first period pins against the Bulldogs, over Sean Ticer. Morenci easily went on to win the meet against a depleted Safford team.

MORENCI – Two of the best wrestling programs in the state, with a combined 13 state team titles between them since 1999, challenged one another in Morenci on Dec. 29. The scoreboard favored the home team 52-21 as the Casey Woodall-coached Morenci Wildcats defeated the Herman Andrews-coached Safford Bulldogs.

Photo By Raymundo Frasquillo: Christian White (195) looks at the official for the result of his final home match. It was a first period pin on senior night at Wildcat Memorial Gymnasium.

They were both state champions in their respective divisions last season, the Bulldogs in Division III and the Wildcats in Division IV, but neither head coach assigned much importance to the late December dual or for that matter, individual records. It is a litmus test to see where each competitor is and the particular need for review in practice sessions. Improvement is what both coaches are looking for. It is part of the season-long learning, growing, and preparation process.

An aura of confidence, much like the dust cloud engulfing Pigpen, surrounded the red and black-clad lads as they stepped on the mat inside Wildcat Memorial Gymnasium, with a full team and twice as many non-varsity competitors, also in the house.

The very fact a large number of Wildcats attend scheduled practice sessions, observe the demonstrations and practice the moves and counter moves until they can do them full speed and instinctively, leads one to be confident of what one can do. It is part of being prepared.

“We’re lucky,” coach Woodall said. “We had between 26-33 show up for practice during the winter break.” 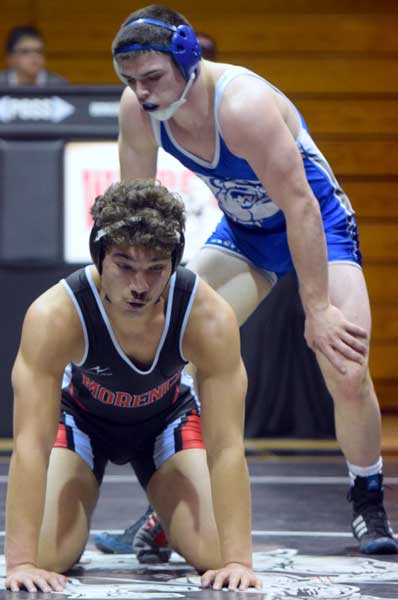 Photo By Raymundo Frasquillo: Ahead 3-1 in the third period, Safford’s Bailey Sanford (182), right, readies himself to protect the advantage. Jacob Vierra scored an escape, however, Sanford prevailed 3-2. 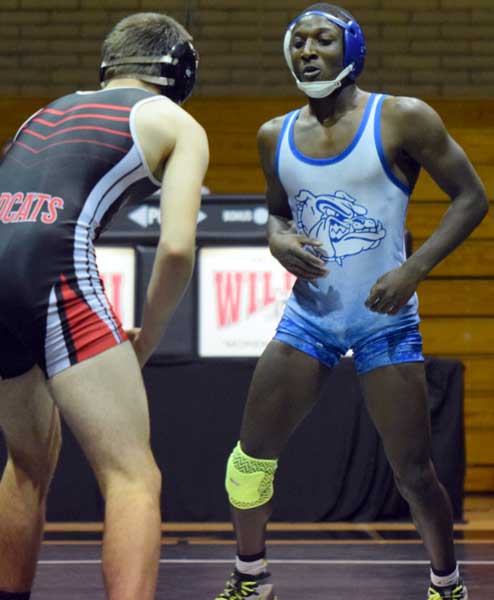 Safford did not field a full team, forfeiting two classes before the head-to-head bouts began, and several more experienced members did not participate in practice sessions held during the holiday break.

“Two weight-watching holidays pull the kids away from their families,” coach Andrews said. “Our nucleus was not here. The group we had here is still young. We had three juniors and the rest were freshmen and sophomores. We needed to put some of the junior varsity members in the lineup to get them some mat time to help get them ready.”

“We didn’t have that last season,” he said. “We’re not where we need to be at this point of the season.”

The real test comes at the state qualifying regional meet in early February. All of the pairings prior to the regional meet are in preparation for the end of season regional. They will go on from there to the meet in Prescott Valley.

A final month looms ahead with valuable life lessons to follow after the prepsters are done with the sport.