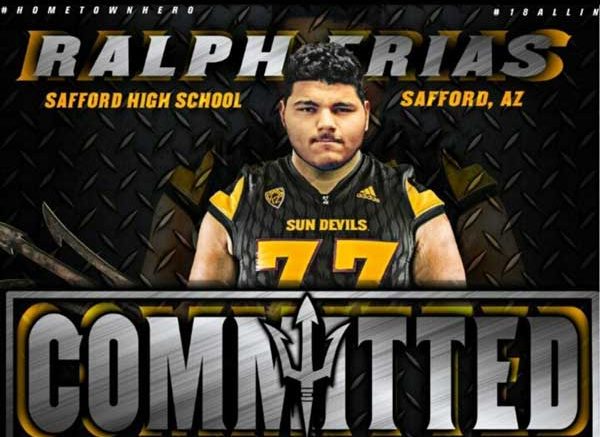 Ralph Frias has verbally committed to ASU via twitter.

SAFFORD – It looks like Safford High School senior Ralph Frias will be suiting up for Arizona State next season.

Having attended ASU camps and being offered a scholarship earlier this year from the Sun Devils, it was no surprise.

On the eve of his final high school football game Friday night, Frias sent out a tweet verbally committing to ASU.

Frias is a 6’7”, 300-lb. lineman who has dominated on the 3A stage, plowing over would-be tacklers to make way for running backs on offense and decimating runners on defense.

Gila Valley Central congratulates Frias on his accomplishments and looks forward to following him on to the next level.

“Words cannot express how I am feeling right now! I would like to thank God for all he has done! Without him, none of this would be possible. I would like to thank my family, friends, teammates, and coaches for helping me along this journey! With that being said, I am honored to announce my verbal commitment to Arizona State University!”

Click here to see more information on Frias, as well as highlights of him in some of his games this season.