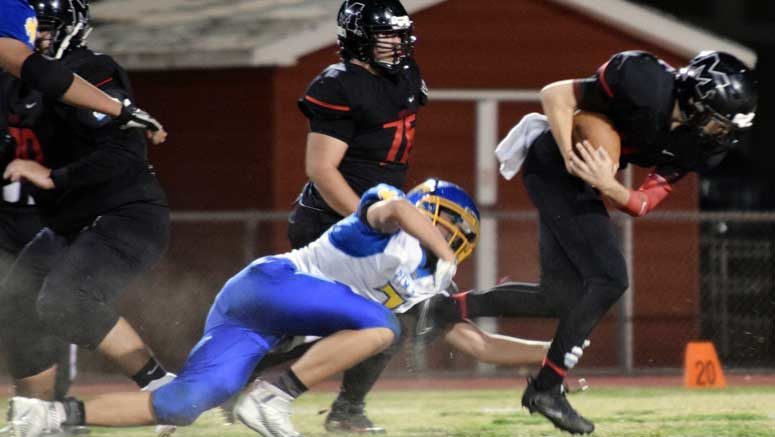 Photo By Raymundo Frasquillo: Morenci scored two quick touchdowns in the first quarter and then held on to beat Pima, 14-0.

MORENCI – It took the No. 8 Morenci Wildcats (7-3 conference, 7-3 overall) just six offensive plays to score twice in the opening quarter against rival No. 13 Pima Roughriders (5-5 conference, 5-5 overall) on Friday and it was enough to escape with the win, 14-0 on The Hill.

“Pima is a really good team,” Morenci head coach David Gallegos said. “They’re big; they made adjustments that we had to try to overcome. I told these guys at halftime we just gotta grind.” (sic)

Morenci opened its bag of tricks early for Halloween and dialed up a halfback pass on its first play from scrimmage. As Mark Roybal took the pitch and came around the right side, he suddenly pulled up and launched a pass downfield to Tito Casillas, who was so alone the closest player to him was in Clifton.

The ball hung in the air like a Goodyear blimp, however, allowing Pima defender Bradyn Brown (who was 20 yards behind at the point of the pass) to nearly catch up to Casillas as he waited. Brown then ran Casillas down along the sideline, but the play still resulted in a 45-yard gain and put the ball at the Roughriders’ 28-yard line.

On the very next play, Steven Chavarria took the pitch from quarterback Nico Carrasco and escaped a diving tackle attempt to tiptoe down the left sideline for 28 yards and the game’s first score. The extra point was good and Morenci was up 7-0 before fans could get their hot dogs and beverages back to their seats. 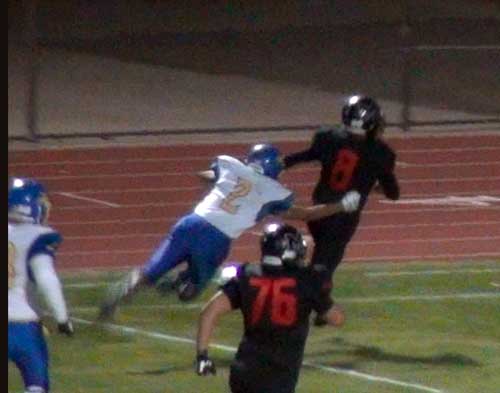 Senior linebacker/tight end Ryne Lewis started at quarterback in place of Josh Whitaker, who was nursing an ankle injury. On Lewis’ first offensive series featured a dropped pass from his receiver and three runs that went nowhere, turning the ball over on downs to the Wildcats near mid-field. With poor run support, a fragile offensive line and receivers with slippery hands and unstable feet, one didn’t have to be Kreskin to predict a long night for Lewis behind center.

On Morenci’s second possession, Chavarria had another 28-yard run as he did a video game, 360-degree spin to escape a tackle and zigged and zagged his way to Pima’s 25-yard line. 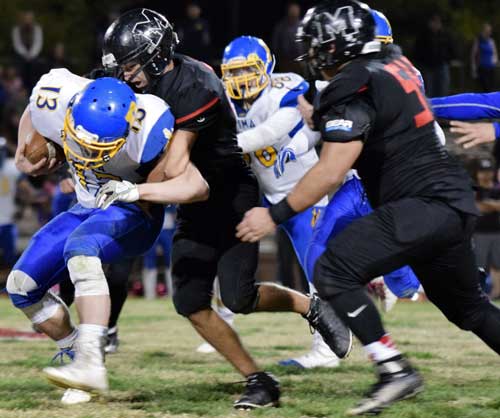 Three plays later, Carrasco looked up and saw a hole big enough to drive the Morenci team bus through and zipped straight up the field untouched for the 20-yard TD. Again, the extra point was good and Morenci was up 14-0. Little did the crowd know that would be the culmination of the scoring on the night.

“I give credit to that Pima team,” Gallegos said. “It was a good battle.”

The Roughriders did threaten on its second possession, getting the ball all the way down to the Wildcats’ 5-yard line. But that’s where Casillas punched out the ball from Bradyn Brown’s grasp after a catch and Brayden McCarthy recovered the fumble.

“It was a good game,” Chavarria said. “We played hard. That was the best we’ve ever come out in a long time . . . We really wanted this one. Now we just gotta restart. It’s 0-0 right now, and we just gotta keep going and strive for that state championship.” (sic) 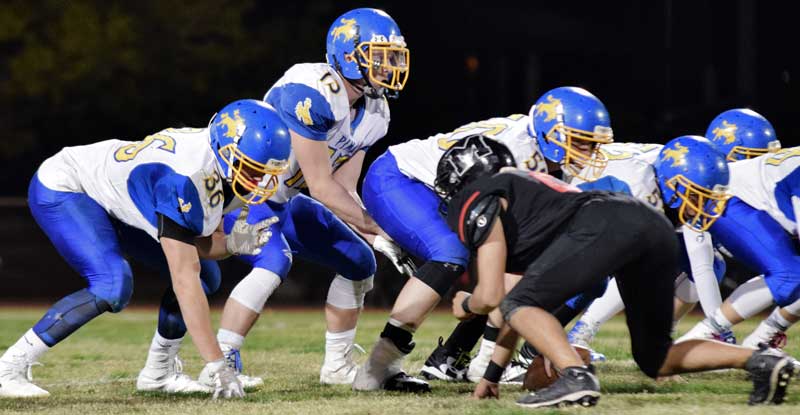 Photo By Raymundo Frasquillo: Pima quarterback Ryne Lewis was on his heels the whole game.

“Our record is 0-0 now and we just gotta make the most of our opportunities,” Gallegos said. 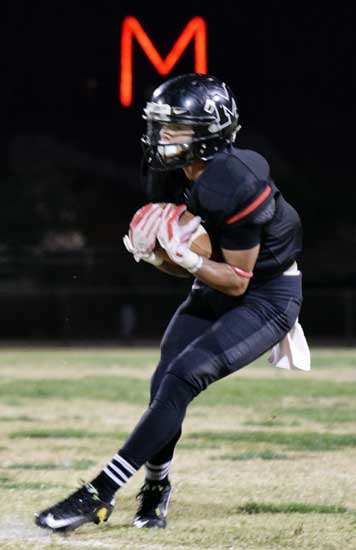 Photo By Raymundo Frasquillo: Tito Casillas hauls in a halfback pass in the first quarter.

In other prep football action:

The Thatcher Eagles (7-1 conference, 9-1 overall) beat the Miami Vandals (3-7 conference, 3-8 overall), 56-0. The Eagles will begin their quest to repeat as state champions with a home playoff game No. 14 Willcox (3-5 conference, 5-5 overall) on Friday, Nov. 3 at John T. Mickelson Stadium at Eastern Arizona College, starting at 6 p.m.

Thatcher opened its season by dispatching Willcox 52-6 at the same venue.