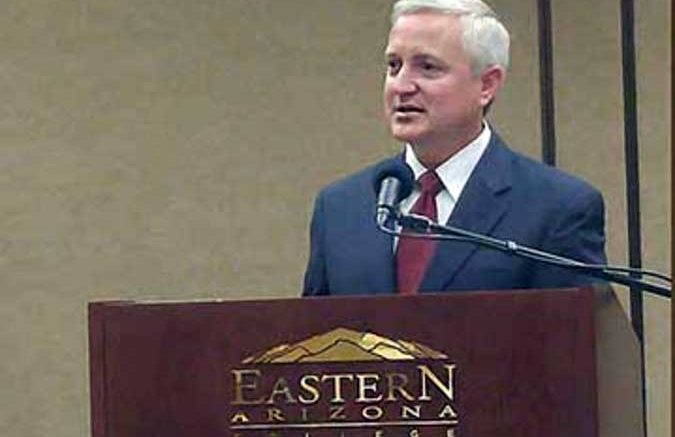 Haynie will succeed outgoing president, Mark Bryce, who announced his retirement in December 2016. Bryce’s retirement date is set for May 15, 2018. He has served as the college’s president since February 2002 and is the longest currently serving CEO of a university or community college in Arizona.

Haynie is currently EAC’s director of marketing and public relations. Previously, he worked as the assistant director of admissions and as an adjunct instructor in EAC’s computer department. He also worked as a producer at Educational Management Group in Scottsdale, where he produced educational videos.

While the governing board is expected to publicly announce its decision at its meeting Thursday, an office representative confirmed the selection, and Haynie expressed his appreciativeness of the decision to Gila Valley Central.

“I’m honored to be selected as EAC’s new president and am grateful for the trust of the board,” Haynie said. “I will work every day to continue the tradition of excellence at EAC.”

Graham County Community College District Governing Board President Lois Ann Moody told Gila Valley Central that Haynie received the majority of the votes for the position and, as always, majority rules. She politely declined to comment on the hire until after the board makes its official announcement of the hire at its Wednesday meeting.

Haynie was one of four finalists for the position, including Dr. Phil McBride, who serves as EAC’s dean of instruction supervising the Fine Arts, Mathematics, Nursing and Allied Health, and Science divisions, as well as the Discovery Park Campus, Dr. Karla A. Fisher and Dr. Richard C. Daniel, who serves as the vice president of institutional advancement at St. Michael’s College, a private Catholic college in Colchester, Vermont. After Fisher dropped out, it was a three-man race with Haynie getting the nod during Monday’s open meeting.

Gila Valley Central will update this article with more information when possible.