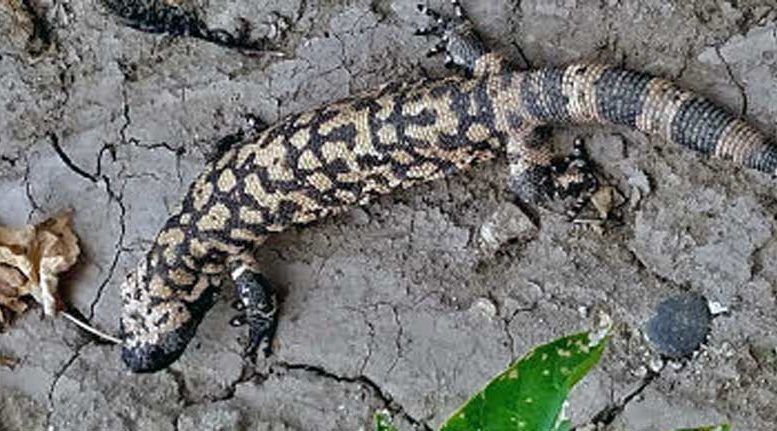 It’s not every day I stumble upon a Gila Monster. In fact, I rarely see one and have probably only crossed paths with the big lizards half-a-dozen times in the past 25-30 years. They’re very reclusive.

The guy in the picture was spotted approaching a cotton field near my hometown of Safford, in southeastern Arizona. Actually, I was fueling my vehicle at a local Shell station – adjacent to a cotton field – when the wife noticed the lumbering reptile crawling along the side of the field’s irrigation ditch.

Normally, Gila Monsters are not prone to prowling in farm fields, instead preferring the desert and semi-desert climes dominated by cactus, mesquite, paloverde trees and similar vegetation. Farming activity and the usual array of chemicals may thwart their interest in agricultural areas.

For those not familiar with the Gila Monster, (pronounced hee-luh) it is a large, bulky lizard capable of reaching almost two feet in length and weighing as much as three or four pounds. They are also covered with bead-like scales, called osteoderms, which are usually black, orange, yellow or pinkish in color.

As the name implies, the Gila Monster is named after the Gila River Basin of central Arizona where they were first discovered. They’re also found in the dry, arid regions of the Mojave, Sonoran and Chihuahuan deserts of the United States and northwestern Mexico.

They are the largest lizard native to the U.S., and only one of two known poisonous lizards in North and Central America. While their bites are painful and cause extreme discomfort, there has been no documented fatalities resulting from a Gila Monster-inflicted wound.

There are a few commercial breeders supplying specimens to laboratories and private citizens. If for some reason, a person would like to buy a Gila Monster for a pet, it will cost several hundred to more than $1,000. Plus, state-approved certification is required.

Being a ground predator, they hunt small rodents, nesting birds, and eggs, other lizards, snakes, and insects. Since they don’t regularly dine out, they are capable of consuming 35 percent – 50 percent of their weight in a single feeding and storing the accumulated fat in their tails.

Gila Monsters live, on average, 20 years in the wild and up to 30 years in a controlled environment. Coyotes and raptors (hawks) are their known enemies.

Active in the warm months – and hibernating in the colder season from about November through February – a Gila Monster often basks at the entrance of their subterranean shelter where they spend most of their lives. It is estimated the lizards remain underground over 90 percent of the time, emerging only to eat, sunbathe or seek a romantic rendezvous.

In typical Old West villainy, Gila Monsters have been held responsible for numerous misdeeds involving ranchers, early settlers, and local Native Americans. How some of the reported calamities could have been perpetrated by the awkward moving lizard is a mystery, but made for interesting speculation.

In an article appearing in the publication “Arizona Graphic”, Sept. 23, 1899, a Dr. Ward of Phoenix wasn’t convinced the lizard was guilty of everything he was being accused of. Actually, the practitioner was of the opinion most Gila Monster mishaps were caused by human stupidity.

“I have never been called to attend a case of Gila Monster bite, and I don’t want to be,” he said. “I think a man who is fool enough to get bitten by a Gila Monster ought to die. The creature is so sluggish and slow of movement that the victim of its bite is compelled to help largely in order to get bitten.” 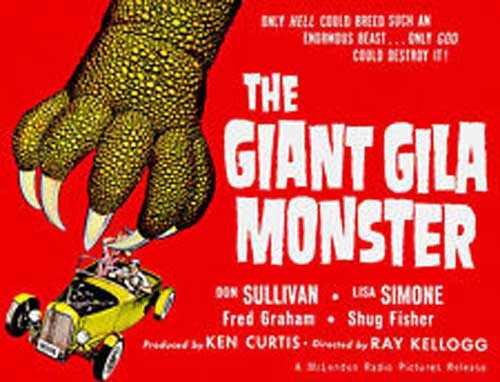 As Western lore began to fade and people became more educated about the Gila Monster’s relatively innocent ways, Hollywood was compelled to reinvent the fearsome creature and added it to its growing list of other intimidating dinosaurs, zombies, globs, dragons and radioactive creatures inhabiting oceans, deserts, forests, swamps, caves, outer-space and metropolitan nightclubs. In a 1959 B-movie “The Giant Gila Monster,” a 50-foot crazed beast incited terror and destruction by tearing through a rural southwestern Texas community. Typical for its time, the movie included the usual array of hot rods, teenagers, assorted heroes, drive-in burger joints and horrified citizens, all filmed in period-correct special-effects science fiction celluloid.

Playing his part, the over-sized dreaded Gila Monster regularly attacked people, cars, trains, dance halls and, of course, the frightened village. Thanks to well-coordinated resistance plans and techniques developed by the town’s folks, the rampaging reptile was eventually killed when a speeding jalopy, packed with nitroglycerin – apparently nitro was easily available in those days – was sent crashing into the monster, blowing him to bits.

A similar scene was repeated nearly two decades later when a small Massachusetts seaside resort policeman shot and exploded a scuba tank lodged in the mouth of a large menacing shark in the original “Jaws” movie.  Like the giant Gila Monster, the Great White shark was totally destroyed, only later to return in Jaws II, III and IV. Fortunately for the Gila Monster – and moviegoers – the big lizard was retired and no sequels followed.

The flick may have been a little more believable if an actual Gila Monster had been used in the filming.  Instead, the villain was a Mexican beaded lizard, a close cousin.

Remastered DVDs of the dopey movie are currently available for purchase on eBay.

Gradually recovering from its bad-guy persona, the Gila Monster’s image has received a boost in positive popularity as well as contributing to the medical community. Proteins from its saliva have been used in the development of treatments for Type II diabetes and Alzheimer’s disease.

While the lowly lizard has been routinely condemned for the past 150 years, evidence of its harmful characteristics is more hype than reality.  It is considerably more likely a person could be struck by lightning than encounter an overly aggressive Gila Monster, especially one large enough to derail a freight train.