Jon Johnson Photo/Gila Valley Central: Riley Morris, left, and Sam Nicholas celebrate their victory over Safford, 42-41, with the Territorial Trophy, which was created by Open Loop Energy to reside with the winning team for the year.

THATCHER – Football is a game of inches. Last year, Thatcher stopped Safford just inches from a game-winning touchdown as time wound out. This year, Thatcher managed to somehow cross the goal line on a needed 2-point attempt and Safford just missed a field goal by inches as Thatcher took home the inaugural Open Loop Energy Territorial Trophy on Friday, with a 42-41 victory over Safford in the game of the year in front of a capacity crowd at Eastern Arizona College’s John T. Mickelson Field.

With the win, Thatcher was presented with the Territorial Trophy, a piece of hardware created by Open Loop Energy to reside with the winning team of the yearly rivalry game in the same fashion as the Territorial Cup goes to the victor of the annual University of Arizona/Arizona State University game.

The immovable object met the unstoppable force as both teams entered the contest undefeated, with Thatcher having outscored its opponents 94-6 and Safford outscoring its opponents 80-0.

It was an offensive showcase for both evenly-matched teams as both scored six touchdowns and both had only two turnovers, each with a  turnover on downs and a lost fumble. Thatcher punted twice on the night and Safford just once. 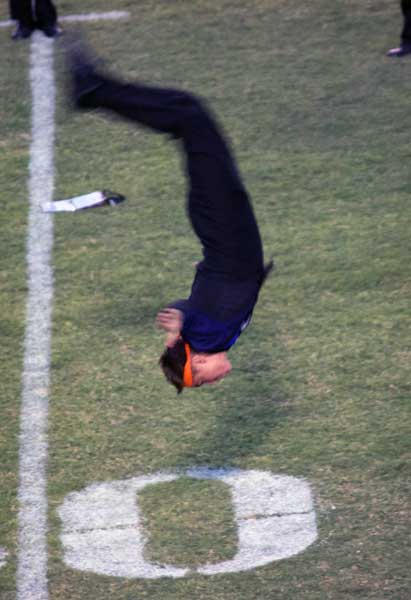 Jon Johnson Photo/Gila Valley Central: The Safford Band was head over heels for the game.

The 2A State Champion Eagles showed their mettle and came out swinging with a 64-yard touchdown run by Quinton Turley on the third play from scrimmage. Turley would score again in the second quarter on a 58-yard run and had the game’s last touchdown on a 19-yard pitch as well as the game-winning 2-point conversion. For his efforts, Turley was honored as Gila Valley Central’s Player of the Game. After the game, Turley gave credit to his success to his linemen.

After being stopped in the red zone on its first possession, Safford came back behind the running of Manuel Aparicio, who finished with 105 yards rushing on 25 carries. Aparicio rushed into the end zone on three occasions, with his first a 1-yard plunge in the first quarter, followed up by a 6-yard TD in the third quarter and a 15-yard TD in the fourth. Aparicio also had 68 yards on kickoff returns and threw for 134 yards on 5 for 9 for a total of 239 yards on the night.

Cameron Abril was also huge for Safford and finished with 8 catches for 206 yards. Abril had some of the biggest plays of the night and big touchdowns, including an 80-yard kickoff return to tie the game at 20 in the second quarter and opened the third quarter by taking a screen pass from Aparicio 80 yards to the house. Abril finished with 278 all-purpose yards and three touchdowns as he also caught a 14-yard TD from Aparicio in the first.

“They’re a tough team,” Turley said. “They gave us a run. They’re going to have a good season and go far.”

Down 15 points with less than a quarter in the game, Thatcher’s punishing running game began to wear down the Safford defense as Riley Morris made punishing run after punishing run. Morris finished the night with touchdown runs of 40 yards in the third quarter and a 6-yard bash in the fourth quarter to cut the Bulldog lead to 41-34. 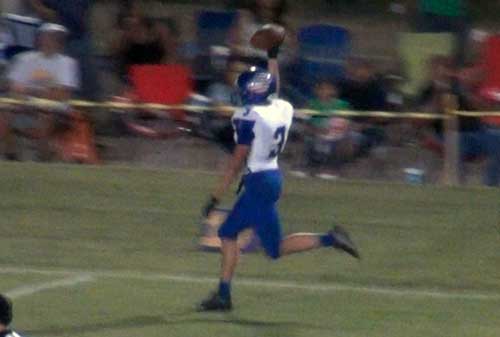 Jon Johnson Photo/Gila Valley Central: Josh Romero hoists the football triumphantly on his 73-yard touchdown reception. The play was called back, however, for pass interference on both the offense and defense.

Facing third and long, Safford appeared to put the game out of reach with a 72-yard bomb TD from Aparicio to Josh Romero. Unfortunately for the Safford faithful, however, Romero and his defender, Trace Goodman, were both flagged for pass interference on each other, which, for a fan, was a sad sight to see the referees take the game out of the players’ hands and turn the tables on what appeared to be a poor call. The Bulldogs were also assessed a 15-yard unsportsmanlike penalty on the play that pushed them back up against their end zone and instead of going back up by 15 were forced to punt.

Thatcher’s Trevin Clark returned the punt 15 yards to the Safford 30 yard line, and after an 11-yard run by Morris, Turley punched in the TD and 2-point conversion to put Thatcher up 42-41 late in the fourth.

Safford made its last drive, however, and ended up in the red zone after Aparicio connected with Abril on a 27-yard reception inside Thatcher’s 15-yard line.

Safford head coach Michael Alba then set up for the game-winning field goal by having Aparicio center the ball on two runs that took it to the 11-yard line and calling a timeout with just 6.6 seconds left. Then it was time for Abril to step up for the kick. Abril had been perfect in kicking extra points the first two games of the season and was 1-1 on field goals as well, but against Thatcher, he had one that was partially blocked and missed another attempt. As he was getting ready to kick, Hinton called a timeout to give Abril something to think about and the chess game continued to the last second.

As he lined up with the pressure of the game mounting, Abril’s kick was long enough but just sailed wide to the left by mere inches, giving Thatcher the win as time expired.

“Our boys played hard,” Hinton said. “It wasn’t pretty, but they did just enough to win, just barely. Hats off to Safford, they’re a great team. They’re definitely going to make waves in the 3A, and we are very lucky to scoot by with that win.” 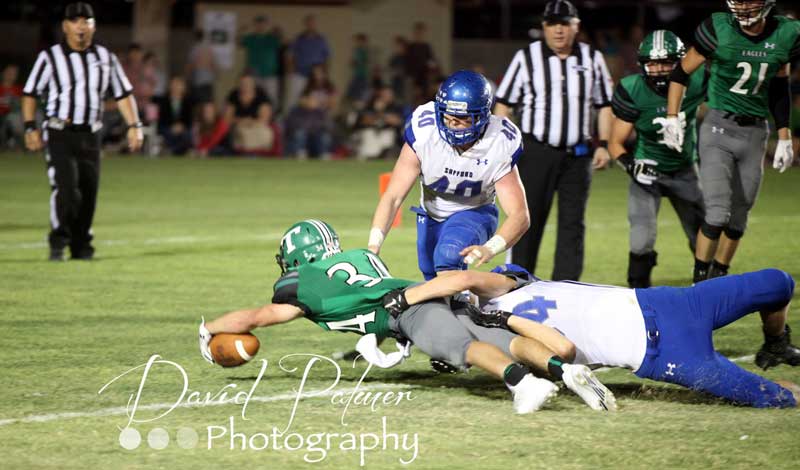 It doesn’t get easier for the Eagles either, who will host the Snowflake Lobos (2-0 conference, 2-1 overall), who recently lost to Kirtland Central of Kirtland, N.M., 21-14.

Jon Johnson Photo/Gila Valley Central: The band plays on for Safford, who will take the sting of this defeat and apply it to next week’s opponent.