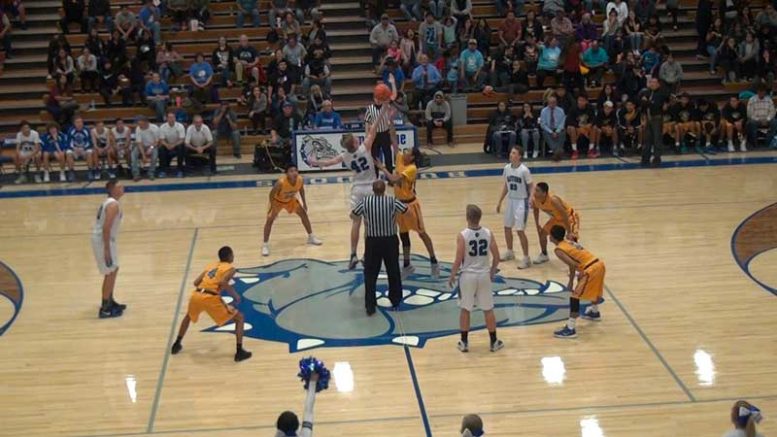 Jon Johnson Photo/Gila Valley Central: Safford's Stratton Baldwin won the opening tip and the Bulldogs were ahead at halftime, but the Alchesay Falcons rallied to beat Safford, 79-65.

SAFFORD – For the first half of their game against the Whiteriver Alchesay Falcons, the Safford Bulldogs looked good, very good.

However, a suffocating full-court zone press caused the Bulldogs (1-2 conference, 10-6 overall) to stumble in the third period with several turnovers that led to fast-break buckets for Alchesay (5-0 conference, 19-1 overall), who brought their style of Res ball down from the north. The Falcons outscored the Bulldogs by 15 points in the period and eventually walked off the court with the victory, 79-65.

“We thought we’d try a little bit of zone press,” Alchesay head coach Kyle Goklish said. “I think that was kind of what was the deciding factor in the second half and the success we had.”

The game seemingly couldn’t have started better for Safford. Dominic Gutierrez started the scoring with a couple quick layups and Collin Thompson, who finished with a team-high 19 points on 8-13 shooting from the field, pitched in with a putback bucket as well. 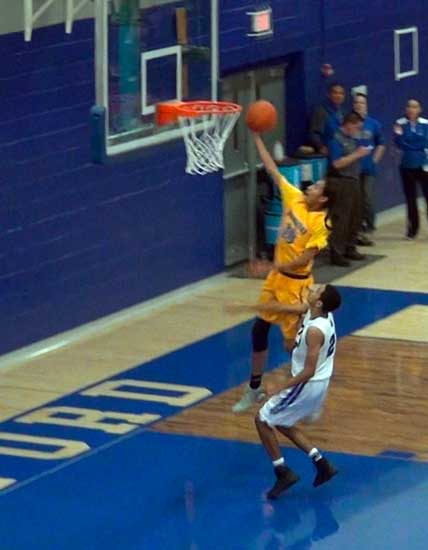 By the time Andrew Smith hit on a corner 3-pointer and Thompson took a steal the distance to the hoop, Safford was up 11-2 and forced Alchesay to take a timeout to figure out what was going wrong. The Falcons previously beat the Bulldogs during the Round Valley Roundball Shootout on Dec. 8 by 29 points, 79-50, but it was Safford who came out fired up at home, pummeling the Falcons early.

For most of the first half, Safford kept the lead as only free throws and the outstanding play of Alchesay’s Harley Upton kept the Falcons in the game. Upton had more than half his team’s point at the half, scoring 20 of his game-high 30 points in the first two periods.

“Some of our key scorers weren’t really scoring,” Upton said. “I think they were kind of hesitant tonight. I had a mismatch, so I was assuming I could take it in on him every time.”

Safford continued to play fearless, however, and after Alchesay’s Shane Stover tied the game with just seconds left in the first period, Safford’s Jedrique Chavez calmly sunk a deep 3-pointer at the buzzer to take back the lead, 20-17 after one period. 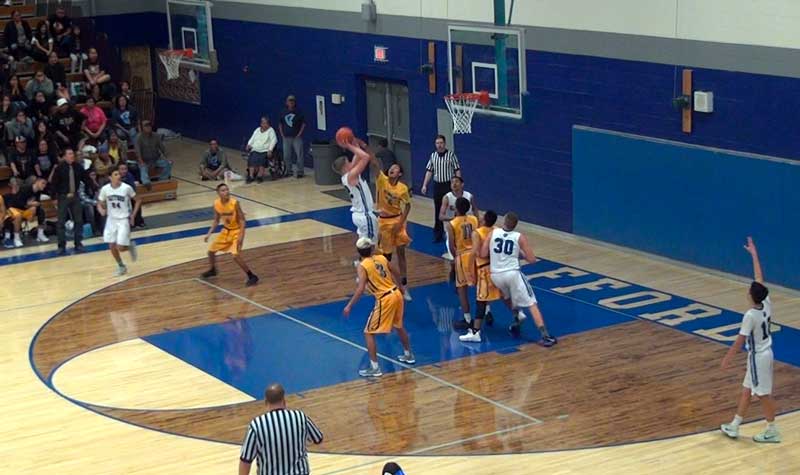 Jon Johnson Photo/Gila Valley Central: Collin Thompson goes up for two of his 19 points on the night.

The teams went back-and-forth during the second period as Harley Upton kept his team close by scoring in the lane as well as from outside, hitting a 3-pointer with 1:32 left in the half to bring the Falcons within three points. 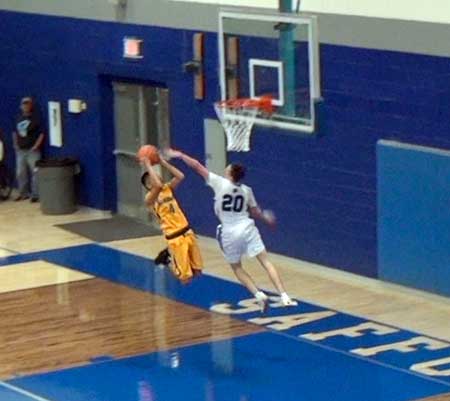 Raekwon Cosay then hit a 3-pointer to tie the game, but Thompson hit one of two free throws to give the Bulldogs the edge going into the half, 39-38. Cosay would finish with 11 points on the night.

Coming back from the locker room, the Bulldogs went right back to their size advantage down low and his Drew Cochran for a quick bucket. Cochran finished the game with 13 points on 5-15 shooting from the field.

After Alchesay scored, however, the Falcons instituted a new full-court zone press they hadn’t tried before to great success against the Bulldogs. Safford, who had no trouble breaking the Pima Roughriders’ press during the EAC Holiday Tournament, stumbled and bumbled into turnover after turnover in the third period, and in a matter of minutes, the Falcons had a seemingly insurmountable double-digit lead. The quick-pace Res ball style enabled a quick turnaround and gave the Falcons good looks at the rim with uncontested shots. The result was a 25-point period to put them up 63-49 at the end of the third.

“We haven’t run it this year, so we felt it was a good time to use it,” Goklish said. “ 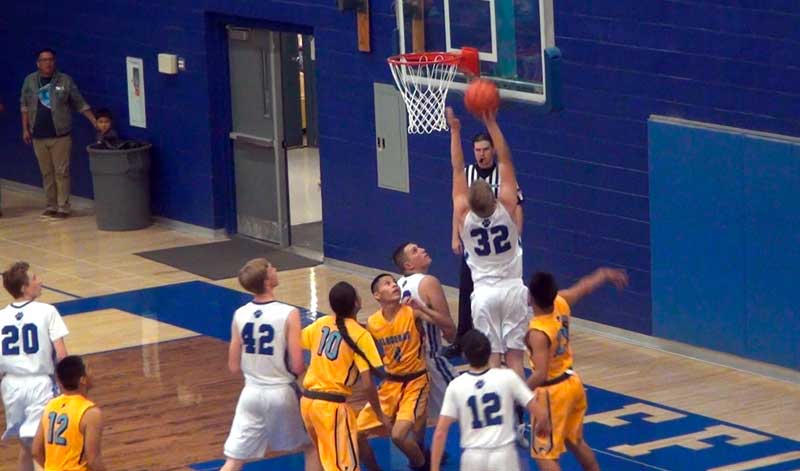 Jon Johnson Photo/Gila Valley Central: Collin Thompson was one of the bright spots in the Safford loss.

When Safford did manage to get the ball across half-court they seemed rushed at times and settled for bad shots. Even when they had clean looks in the paint, the ball just didn’t fall for them in the third, and Alchesay continually scooped it up and sent it flying downcourt for quick buckets.

In the fourth period, the Falcons showed-off their coaching by somehow slowing their cutthroat pace to not allow the Bulldogs enough chances to come back. 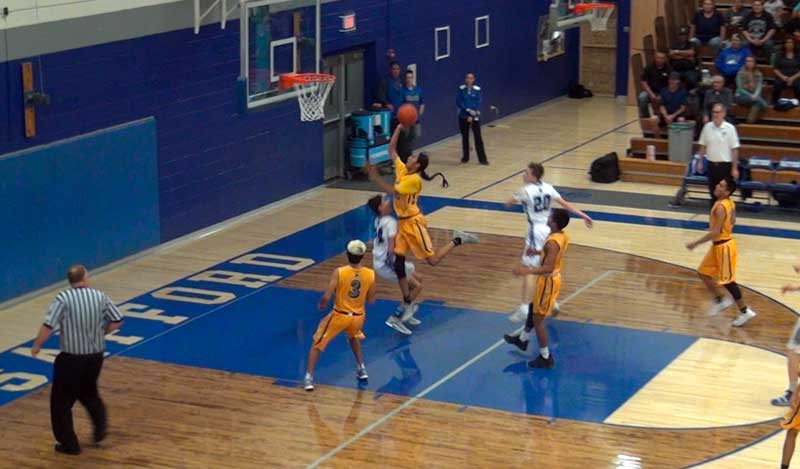 Safford continued to play hard through to the end and matched Alchesay in the fourth, but that fell far short of the goal as Alchesay walked off the court with the victory, 79-65.

“It was a team effort win,” Upton said. “We have some more road games on the way; we play Chinle this Thursday, so that will be a tough task to take.”

The Bulldogs face another tough battle as they next host the Globe Tigers (1-0 conference, 13-2 overall) on Jan. 9 at 7 p.m. Globe has scored 90 or more points in a game six times so far this year.