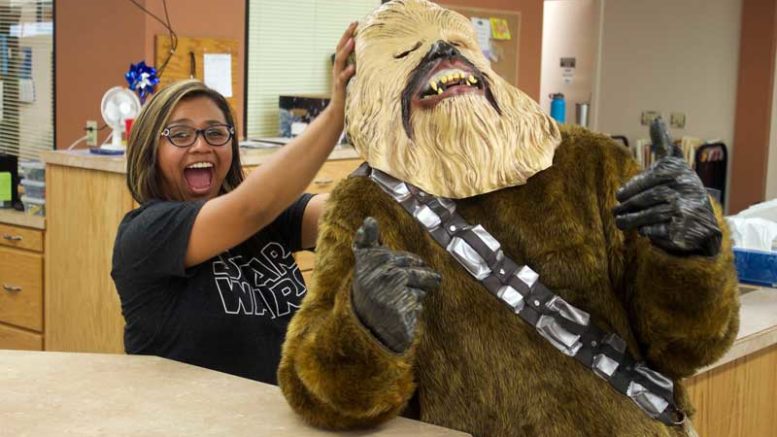 Jon Johnson Photo/Gila Valley Central: Chewbacca (Michael Moreno) wasn't the only one who enjoyed Star Wars Day at the Safford Library on Thursday. Here he gets some well-deserved attention from library employee Araceli Cuiriz.

SAFFORD – The Force was strong Thursday as hundreds of fans young and old packed the Safford City-Graham County Library on May 4 for its third annual Star Wars Day celebration. Attendees had the chance to high five Chewbaca, have a lightsaber battle against Darth Maul or just geek out on the copious amount of memorabilia. 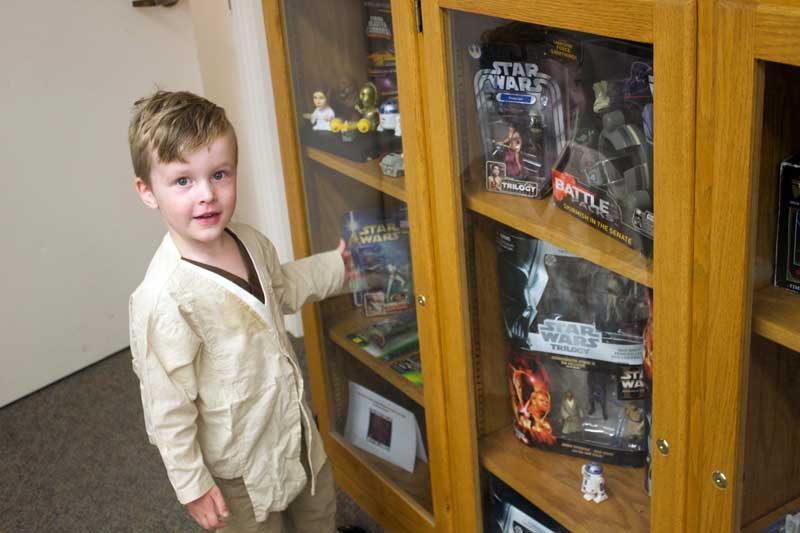 The event is designed to bring children and others into the library so they can discover all the facility has to offer while feeling comfortable and having fun.

“My goal is to ‘descarify’ the library to make it a comfortable place for people to go,” said library director Leanne McElroy. “We have seen the biggest turnout we have ever seen at Star Wars Day, so it has been fun. We’ve just had fun at every level.” 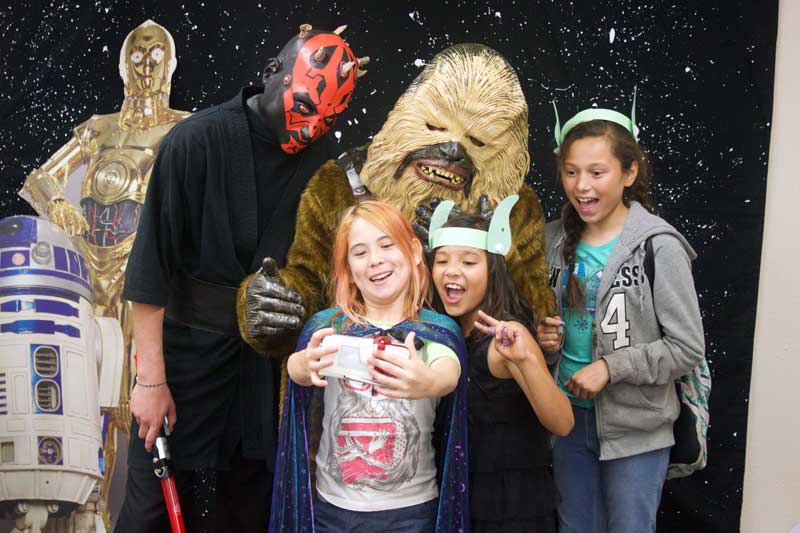 Some of the activities throughout the day included craft making lightsabers, Yoda and Princess Leia ears, monster drawing, creating a planet wall and more. There was also multiple showings of “Rogue One: A Star Wars Story”, numerous collectibles from the Star Wars universe to examine and a variety of books and other material to explore. 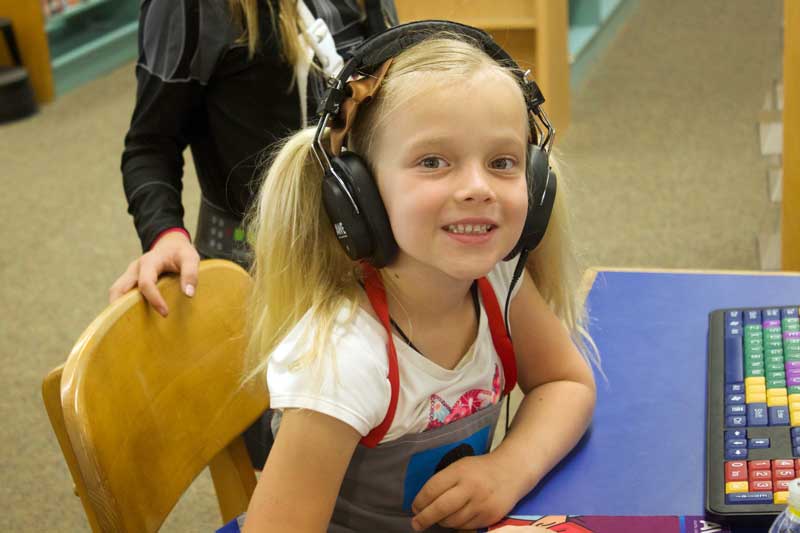 Jon Johnson Photo/Gila Valley Central: Avalon Johnson, 6, of Pima, pauses from being R2D2 to check out other amenities the library has to offer.

Princess Leia (Leah Talley) also read to some children and she and a cadre of cosplay acquaintances posed for pictures and interacted with fans of the movies. The cosplay participants also included Darth Vader (Hadley Schmidt), a Stormtrooper (Scott Russell), Darth Maul (Caden Skinner) and Chewbacca (Michael Moreno). 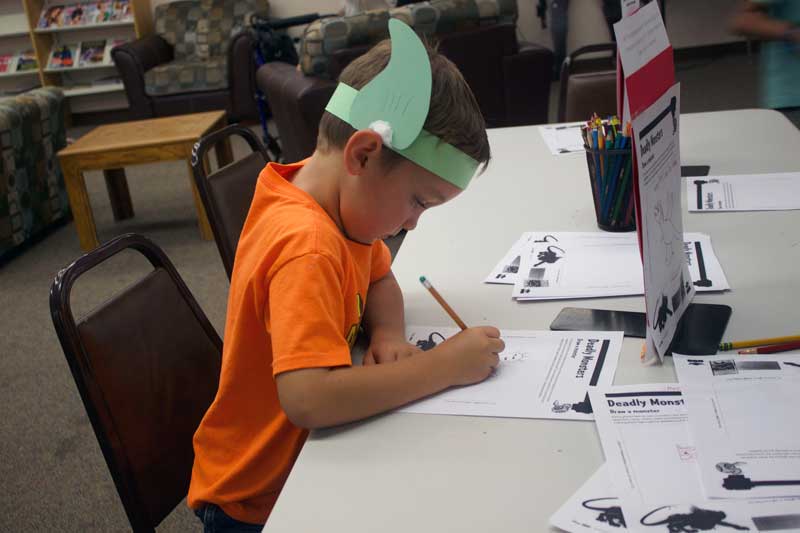 Melanie Russell, Scott Russell’s wife who also attended the event dressed up as Han Solo, said she and Scott enjoy dressing up as the characters whenever they can. They both teach at Eastern Arizona College (EAC) and Melanie said during Halloween Scott dons his Stormtrooper outfit and teaches in it throughout the day.

“We do this every year,” Melanie said. “We’re huge fans.” 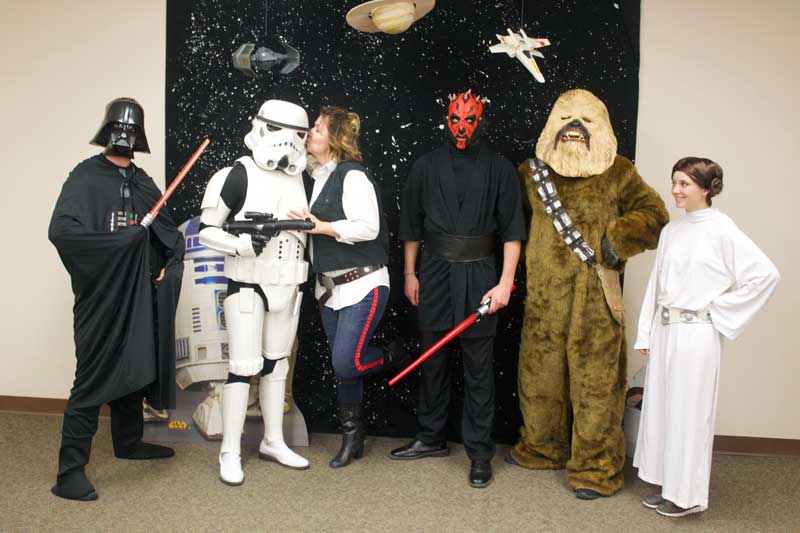 Parents from throughout the Gila Valley brought their children to play and participate in the crafts as children were represented from Pima to Solomon.

Rebecca Tapia, of Solomon, brought her son, Xander Landry, 5, and said he loves everything Star Wars. While Xander enjoys the new reboot, Rebecca said her favorite movies are the classic ones that began the franchise. 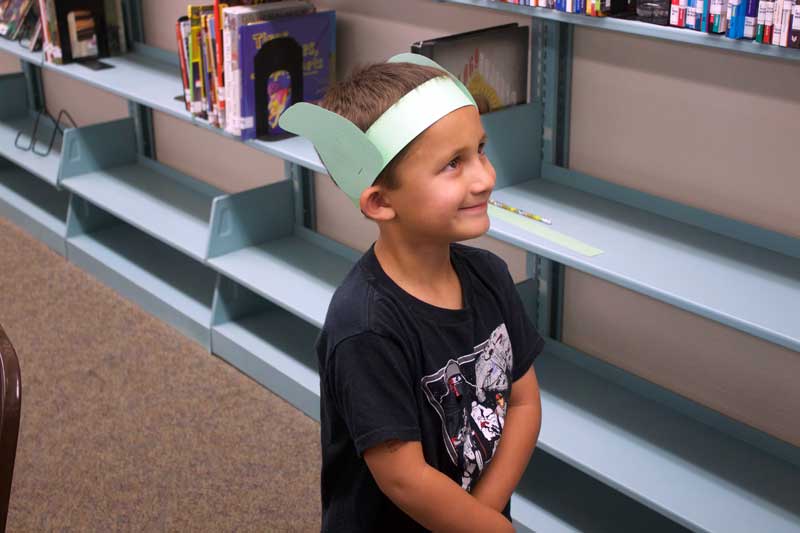 “What we found was, really, if you build it they will come,” McElroy said. “Everything you see, 99 percent of it is donated, so there’s not a high cost for this program at all.” 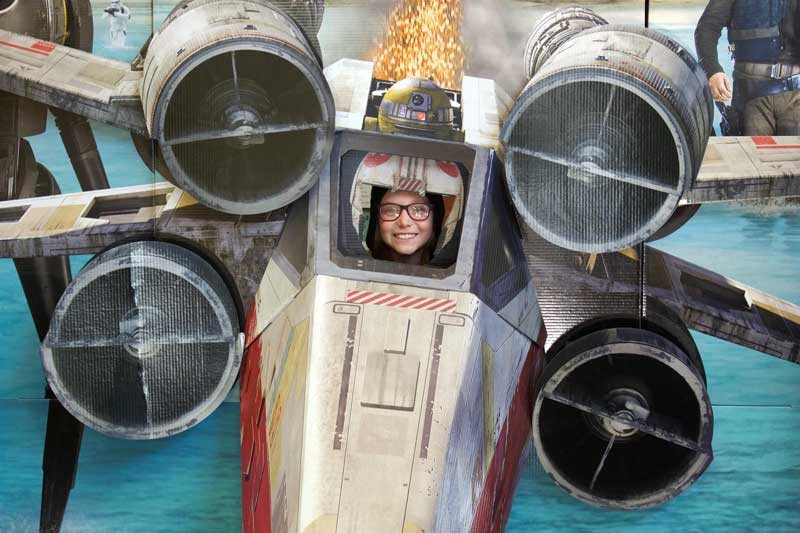 The event was also the swan song for Church of Jesus-Christ of Latter-day Saints Senior Missionaries Ronnie and Laura Reynolds. The Reynolds’, who are from South Carolina, have nearly completed their term of service to the community and are scheduled to be released to return home next Friday. While in town, they have donated their time to assist the library in any capacity needed, and while they usually are found replacing items back on shelves and such, the event gave them a chance to interact with the children on a more personal level by assisting them in the craft section creating Yoda ears and Princess Leia hair buns.

“We just enjoy coming out and helping the library,” Ronnie Reynolds said. “We enjoy helping the kids, and we have a good time too.” 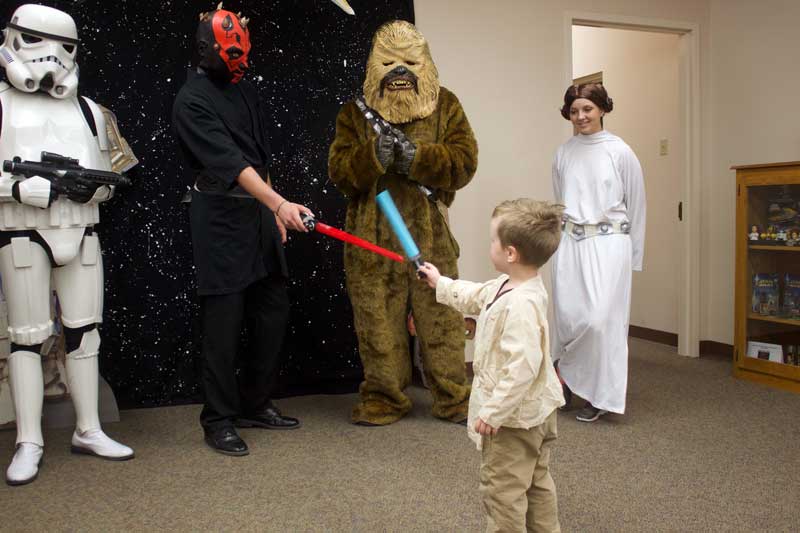 The library encourages the community to visit and see all of its Star Wars memorabilia and associated items as well as its many other offerings and programs.

“If you like what you saw today, come back,” McElroy said. “We have the summer reading program; we have Library-Con; we have fan art. This is just the beginning.”

Godfrey the Magician perfoms at the Safford City Library