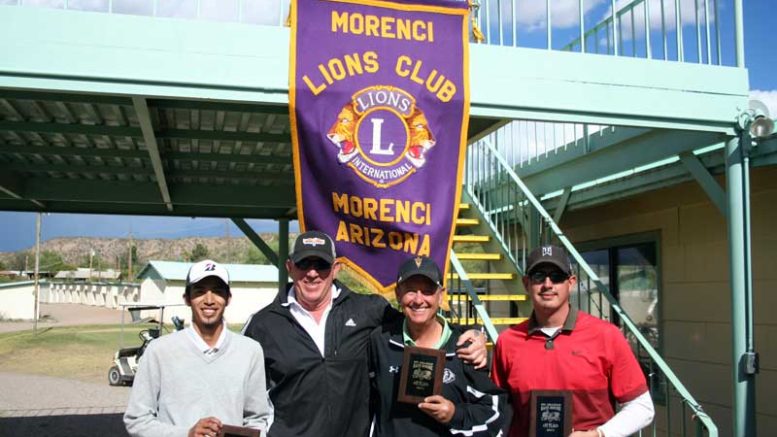 Photo By Gualterio Casias: This team took first place at the annual Mt. Graham Safe House benefit tournament on April 29 at the Greenlee Country Club in York Valley. Members are, from left, Nick Saiz, Sean Maddock, Bobby Holder and Philip Romero. A record 59 golfers from Greenlee and Graham counties and surrounding areas participated in the tournament.

Did the often-strong winds make a difference for golfers at the Mt. Graham Safe House Golf Tournament?

Not really, said Tom Powers of the Morenci Lions Club, which sponsored the April 29 event.

Other than occasional strong gusts of wind, it was a clear, sunny day for the annual tournament held at the Greenlee Country Club. A record number of golfers, 59, played their way through 18 holes on the lush green course at the country club in York Valley. The golf course contrasts sharply with the surrounding desert and the rugged mountains visible on the horizon.

Besides enjoying playing golf and having a day of fun in the sun, golfers showed up to support the Mt. Graham Safe House. All benefits from the tournament go toward assisting the facility that serves women and men in crisis from Greenlee and Graham counties.

The top three teams earned bragging rights and handsome commemorative plaques for their efforts. Winning first place was the team of Bobby Holder, Sean Maddock, Philip Romero and Nick Saiz. The claim as the runner-up team came down to the wire. Actually, it came down to a coin toss to determine which team finished in second or third place as the two teams turned in identical scores. Winning the coin toss was the team of Ruel Rogers, Ray Gaethje, Art Rogers and Ruel Rogers Jr. 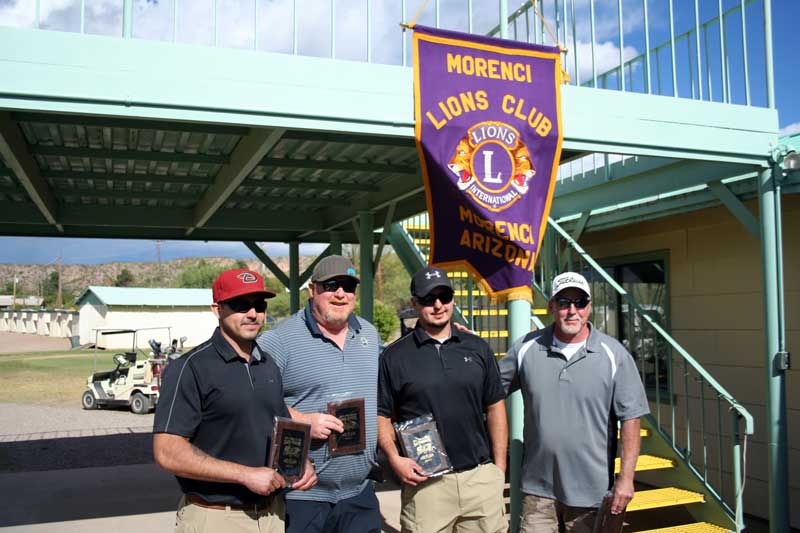 Photo By Gualterio Casias: This group of golfers finished in second place at the annual Mt. Grahm Safehouse benefit tournament at the Greenlee Country Club in York Valley on April 29. They are, from left, Art Rogers, Ray Gaethje, Ruel Rogers Jr. and Ruel Rogers. They finished strong among a field of a record 59 golfers who competed in the tournament.

Comprising the third place team were Dale Lockmiller, Joe Edwards, Steve Blanton and Lance Edwards. The tight competition carried the action until about 3 p.m. The tournament usually ends by 1:30 followed by an awards presentation at 2 p.m.

There were several spectators as well – families and friends – who mixed with the golfers who sat in the clubhouse cooling off with a soda pop or beer. All told, the crowd numbered about 76.  It was pretty obvious who the tournament players were. Many of them had slightly reddened skin along with sweat-soaked hair and ball caps from being out in the sun.

Everyone, golfers and guests, were treated to a lunch of hamburgers, potato salad, regular salad and desert. Lions Club members Bryan Boling and Rego Padilla spent hours at the grill set up behind the clubhouse cooking the thick burgers. There was plenty for everyone at mealtime. Some even made themselves burgers with double patties.

Among those guests making new acquaintances and enjoying a double burger was town of Pima Manager Jeff McCormick. Powers said he was glad McCormick came to the tournament.

“It’s really great that he came and reached out to folks from Greenlee and those who came from Graham,” Powers said. “To us Lions, it meant a lot having him there.”

The clubhouse has two rooms, one larger than the other. The smaller one is regularly used for dining while the larger one is primarily used for meetings. It is where the Greenlee Search & Rescue Unit (Sheriff’s Posse) meets monthly. Two tables in the meeting room were packed with prizes that were raffled off. They ranged from toys for children or items more suited for adults. Among items being raffled were what Powers referred to as “personal.” 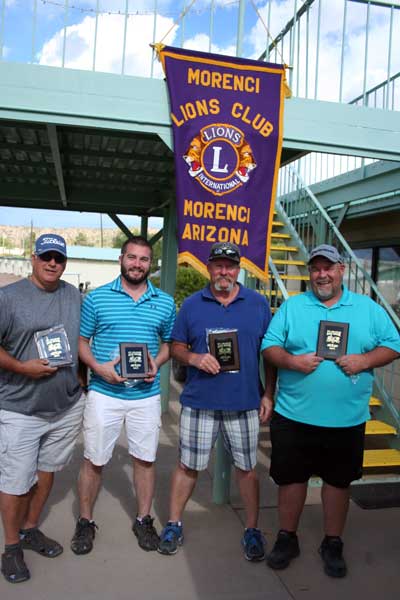 He noteed out that among raffle items were prizes such as certificates to receive a haircut or hair styling and having fingernails done.

“I really loved the personal stuff because they came from the heart,” Powers said. “Whatever needs to be taken care of, they do.”

Speaking of coming from the heart, a representative of  the Safe House addressed golfers and guests about the critical services provided by the organization. She spoke of instances in which the Safe House provided shelter not only for women, but also for men in crisis. Among services provided are a place for battered women – or men – to receive safety and shelter. She also told of how the Morenci Lions Golf Tournament is critical for funding. She expressed her deep gratitude on behalf of the Safe House to everyone who participated in the tournament as players or by other means.

Besides entry fees, there were those who sponsored individual holes. Among them was Freeport McMoran, Inc., one of the world’s largest mining companies. Freeport owns most of and operates the giant Morenci copper mine, located about 14 miles from the Greenlee Country Club. Some of the mine is visible from the clubhouse. The Morenci operation is the largest operating open pit copper mine in North America.

As for the Morenci Lions, the club is a strong driving force in a program to obtain eye glasses and hearing aids for those who cannot afford them. The Lions provide scholarships for high school students in Greenlee to attend college. The club also contributes to the Greenlee community in many other ways through donations or other assistance. The Lions come on strong particularly at Christmas to help the needy.